‘Return & Remembrance’: In Commemoration of the 75th Anniversary of E.O. 9066

“Return & Remembrance,” a pilgrimage to the Portland Assembly Center commemorating the 75th anniversary of Executive Order 9066, was held at the Portland Expo Center on May 6. Sponsored by the Oregon Nikkei Endowment and the Portland JACL, the event welcomed more than 700 people who all returned to honor the Japanese men, women and children interned there 75 years ago. Portland was declared the first city on the West Coast to be free of all people of Japanese ancestry during World War II.

Guests that entered the center had the opportunity to experience the “Architecture of Internment” exhibit by Anne Galisky and Graham Street Productions. The exhibit examines Oregon’s role in the decision to intern Japanese and Japanese Americans during the war. It was a powerful way for guests to gain a greater understanding of the impact of E.O. 9066 as they walked into the very space that was once used to incarcerate Portland’s Japanese community. 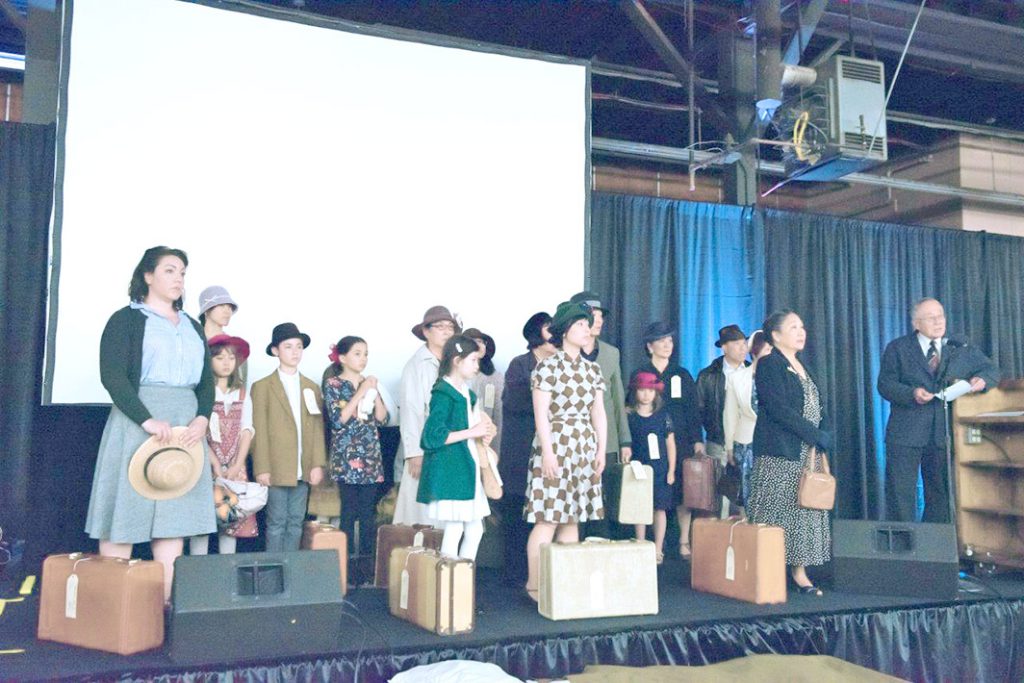 Lawson Inada, far right, and a cast of local actors featured in “Nihonmachi.”

The program began with upbeat songs played by the Minidoka Swing Band, as well as a reading by award-winning poet Lawson Inada, who presented a piece titled “Nihonmachi.” As actors in period outfits wandered the stage, Inada reminded the audience of thriving Japanese businesses in Old Japantown, and actors greeted one another as they went about their day.

Then suddenly, the music stopped. Inada’s tone changed. “Hold it, hold it! What is this? Executive Order 9066? We have to leave everything behind? We can only take what we can carry?” Slowly, the actors, now solemn, picked up their suitcases, held the hands of their loved ones and quietly walked down the center aisle, away from Nihonmachi. As they walked, Todd Yuzuriha of the Minidoka Swing Band played a haunting rendition of “Taps.” In the audience, eyes filled with tears as survivors remembered their own walks from Nihonmachi, and others imagined their parents, grandparents and great-grandparents making that painful walk away from their homes, into the unknown.

Lynn Fuchigami, executive director of the Oregon Nikkei Endowment, and Marleen Wallingford, president of Portland JACL, then welcomed the audience to “Return & Remembrance.” They both reminded attendees that the day was in honor of all of the people affected by E.O. 9066, especially those that had to report to the Portland Assembly Center on May 6, 1942.

Master of ceremonies David Ono, an anchor for ABC7 Eyewitness News in Los Angeles, opened with a historical background. Ono pointed out that Portland was the first city to have all of its Japanese population report to an assembly center. To commemorate that life-altering event, he asked all of the internees present to stand so that they could be honored, and in that moment, the true impact of E.O. 9066 was apparent to all.

The first Internee to speak was George Nakata. Nakata grew up in Portland’s Nihonmachi and came to the Portland Assembly Center as a young boy. “Three thousand, six hundred, seventy-six — we came. Young and old, Issei, Nisei, Sansei,” he recalled. “We came with only what we could carry, and that wasn’t much.

We came with a tag. We committed no crime. We had no due process. We lost our homes, our friends and our pets. We came.”

Nakata took the audience back to December 1941 and recounted stories of Issei men who were incarcerated. He spoke of Gen. John L. DeWitt, who supported the internment and said many times, “A Jap is a Jap. Doesn’t matter if he’s a citizen or not.” DeWitt called Portland the first “Jap free city on the West Coast.”

Nakata also described the living conditions of the Portland Assembly Center when they arrived. He recalled that it was a home of horse stalls and chicken coops and fly

paper hung everywhere. They lived in 14×14 “rooms” with plywood walls. They slept on cots with canvas bags filled with hay for a mattress. When friends “visited,” they had to talk through barbed wire.

Nakata remembered lining up for everything; there were lines for eating, showering, using the bathroom. The center had a newspaper, the Evacuzette, and that was where everyone got the facts. According to Nakata, there were rumors flying around about what would happen next. Minoru Yasui wrote for the Evacuzette; Nakata remembered Yasui as “our voice” both during internment and as he continued the fight after camp.

Nakata was followed by Jim Tsugawa, who was also interned at the Portland Assembly Center as a boy. Tsugawa remembered following the older kids around camp and becoming their “mascot” as they used sports as an outlet for life behind the barbed-wire enclosure.

Oral history interviews by the Densho Project and the Oregon Nikkei Endowment collection were shown to give the audience a broader view of life at the center. Jean Matsumoto, Mabel Shojii Boggs, Alice E. Sumida, George Katagiri, Shizuko “Suzie” Sakai, Henry “Shig” Sakamoto and Tsuguo “Ike” Ikeda were each featured. They spoke of the food, the recreation, the sickness that so many faced, the constant presence of armed guards and the difficult realization that being interned was wrong.

Ono reminded the audience of the ways that internees survived such harsh conditions. Two such distractions were music and dancing. Ono explained that the center held dances, where young people would gather to try and gain some sense of normalcy while incarcerated. The Minidoka Swing Band then performed two songs, “Sentimental Journey” and “Boogie Woogie Bugle Boy,” in memory of the music played at the center. 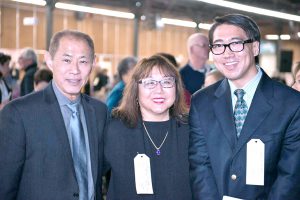 The event’s keynote speaker, Dale Minami, was introduced by Peggy Nagae. Nagae worked alongside Minami during the long fight to overturn the cases of Fred Korematsu, Gordon Hirabayashi and Yasui that upheld E.O. 9066.

For Minami, his work was not just about winning in court, but also about educating the public. During the original cases of Korematsu, Hirabayashi and Yasui, government lawyers lied to the Supreme Court. People like Gen. DeWitt falsified information to make it seem as though people of Japanese descent living in America perpetrated acts of sabotage and espionage against the U.S., when in fact, no such acts ever occurred. The overturning of the original decisions in these cases brought light to what truly transpired.

Minami recounted the preparation it took to retry these three cases, how he convinced Yasui that the decision could be overturned and his realization about how courageous these three individuals were to stand up to and speak out against E.O. 9066. He then reminded the audience that descent does not make one nonpatriotic.

“We have a moral obligation to speak out for the rights of all people,” Minami said.

Weston Koyama, the first Minoru Yasui Fellow, followed Minami’s keynote speech. Koyama spoke of the struggles many Japanese Americans faced to find their place in a society that often asks them, “Where are you from?”

To find his own place, Koyama worked with the Oregon Nikkei Legacy Center to look into his family history. He found 100 letters that were written by his grandfather and grandmother while in camp; these letters gave him insight into their experiences during a tumultuous time.

Through his research, Koyama discovered that out of tragedy, great things can happen. After camp, people like Yasui continued to fight injustice and became inspirational for young law students like Koyama. In fact, Koyama’s research into his past brought him to the realization that Nikkei people do not need to be defined by oppression, but rather by pride in the resiliency and hope they carry for their future.

Other prominent guests at the event included Sen. Ron Wyden (D-OR), who reminded the audience that he is fighting alongside the Japanese American community to make sure that atrocities like the internment never happen again. A representative from Sen. Jeff Merkley’s (D-OR) office read a letter from the senator in honor of the day. And Tom Hughes, president of Metro, read the formal apology to the Internees written by Gov. Kate Brown. The proclamation stated that what happened to the Japanese community will never happen again to anyone.

The program came to a close with the “Remember Us” processional. Chisao Hata, a Portland artist, art teacher and performer, created a tag project in memory of all the internees at the Portland Assembly Center. Hata was inspired by the African saying that as long as someone’s name is mentioned, they will always be here.

To remember the name of each internee, Hata spent hundreds of hours on the project and held events throughout the city where community members wrote the names and family numbers of each internee on a tag, similar to those given to internees when they arrived at the center. Each tag was tied to a rope and displayed as an art piece.

The entire rope was carried down the aisle, accompanied by Unit Souzou, one of Portland’s premier taiko companies. The rope spanned the entire length of the stage as a reminder of the 3,676 people who were forcibly removed from their homes and interned in the very place where the audience was gathered.

As actor Heath Hyun Houghton read the final words that Yasui wrote in the Evacuzette, “Faith in Conviction,” the rope stayed onstage as a reminder of each internee. And with the resonance of the taiko drums, the presence of those 3,676 men, women and children whose lives were forever altered on May 6, 1942, filled the space.