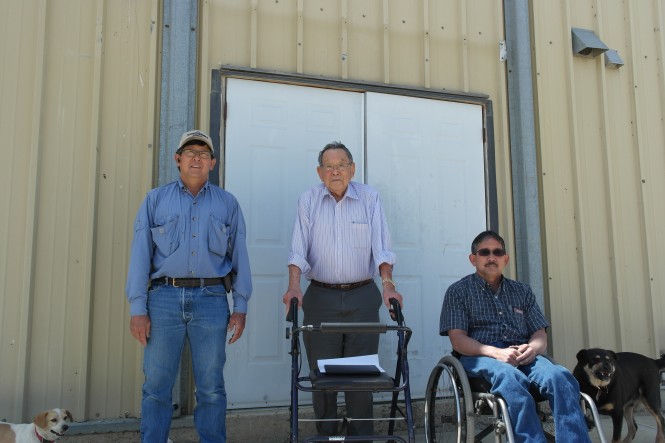 If you’ve ever driven through California’s great Central Valley, you’ve seen the signs: “Food Grows Where Water Flows,” “Water = Food = Jobs,” etc. To most Californians, the current three-year drought is merely an inconvenience. To farmers like Firebaugh’s Rinks Sano, it’s a matter of survival.

In 2011, the last “wet” year, Sano Farms received less than 50 percent of the water it needed from the Federally controlled water system. In 2014, California has notified him that he will receive zero percent. That’s zero, as in nothing.

Sano Farms must determine how much of its 4,200 acres will remain fallow — and for how long. That’s an easier decision for row crops such as tomatoes than it is for orchard crops like almonds. When you consider that almonds are California’s No. 1 cash crop and that Sano Farms supplies three different almond wholesalers, including the massive Blue Diamond, that decision becomes even harder. Following this year’s harvest, Sano Farms will be pulling out one entire orchard of mature almond trees.

Fortunately for Rinks, that is a decision he no longer has to make as he has delegated day-to-day operations of Sano Farms to his children, Alan, Bobby and Lori. Rinks has earned that right since he turned 90 in 2013.

He is still sharp and independent, and most days, his biggest decision is whether to drive to the poker room in Fresno or Turlock for no limit Texas hold ’em. His biggest physical ailment is Nisei Farmers Disease — he’s extremely hard of hearing. On my recent visit, his hearing aid wasn’t working, so communication was dependent on eye contact and lots of shouting.

Rinks Atsushi Sano was born in 1923 on Bacon Island in the Sacramento Delta. The Sano family worked as sharecroppers, which meant living an itinerant life following the crops. Rinks’ father eventually found more stable employment on the Kishi Ranch in Livingston, Merced County. It was there that Rinks graduated from high school in 1940.

In 1942, like all other Japanese Americans in Merced County, the Sano family was forced from their home into American concentration camps, first at the Merced Fairgrounds and then at Amache, Colo.

Rinks was an adult by this time, and he knew what his rights as an American citizen were. He remembers the humiliation he felt of being treated like a criminal, even though he had done nothing wrong.

Rinks left Amache as soon as he was able to and found work harvesting sugar beets. He tried to join the Army but was rejected because of his poor vision.

Eventually, Rinks found his way to a manufacturing job in Detroit, Mich., where he was able to earn a decent living and even had enough money to visit the racetrack and bet on the ponies. Rinks is looking forward to the Belmont Stakes when California Chrome, born and raised by his neighbor, cattle and thoroughbred baron John Harris, will be running for the Triple Crown. (At press time, California Chrome finished fourth in the Belmont Stakes, which was held on June 7.)

In 1945, Amache closed, and the Sano family returned to the Livingston area, where they were greeted by signs saying, “No Japs Wanted” and “Keep Out You Rats.” And Livingston was one of the friendlier communities in California.

Both of Rinks’ parents died soon after the war. Rinks and his brother began farming in the LeGrand area. Rinks married Helen Yamano in 1951, and they established a home in Merced while continuing to farm in LeGrand. Rinks and Helen raised their four children, including daughter Julie, in Merced.

In the early 1970s, Rinks moved his farming operations to Firebaugh, where both land and water were cheap and plentiful. The rest, as they say, is history.

I took a tour of the Sano headquarters in west Fresno County. My first stop was the repair barn, which is the size of an airplane hangar. The barn was full of tractors of all shapes and sizes, more different kinds of tractors than I knew existed.

I asked Bobby Sano how many tractors were on the ranch, and he replied that he couldn’t even guess at the answer. In addition, there are fertilizer spreaders, shakers, rakes, sprayers, sorters, pruning towers, almond harvesters and other equipment that was a mystery to me.

Then came the tomato harvesters, each of which is the size of a small naval vessel. These incredible machines dig up the plants, separate the tomatoes from the rest of the plant, sort the tomatoes, mulch the greens and return the mulch to the soil — all at the same time.

Most of the tomatoes on the Sano Ranch are processing tomatoes, meaning they will end up on your dinner table as spaghetti sauce or ketchup rather than on your hamburger or in your salad.

The next stop on the tour was “the Shop,” which is the heart and soul of the whole operation. The shop houses the parts department and the fabrication division.

The parts department resembles your neighborhood auto store. Fabrication, the domain of Alan Sano, takes care of the parts they don’t have or that don’t exist. With all of the equipment and tools, it felt more like a Sears department store than a farm shop. Other corners of the shop had more work stations, break facilities, lockers, uniforms and other agricultural industry necessities.

At this point, I was convinced that Sano Farms is just like any other farm, only much, much bigger. I wasn’t prepared for the pipe storage yard. There are literally miles upon miles of irrigation pipes stored there, all sorted by length and diameter.

The entire 4,200 acres have been mapped out and color coded with the location of wells, pumps and the size of irrigation pipes needed to get water from Point A to Point B. This was my reminder that even with all of the sophisticated farm machinery, the life blood of any farmer will always be that which the rest of us take for granted: water.

There were still lots of farm operations left to tour, but it was obvious to me that Rinks was anxious to get to the poker table and that I was keeping Alan and Bobby from more important work. I asked Rinks why he felt such loyalty to JACL. He simply replied: “JACL stood up for us when nobody else would.”

JACL will be honoring the Sano family at the National Convention Sayonara Dinner on Friday, July 11, at the Doubletree Hotel in San Jose, Calif.