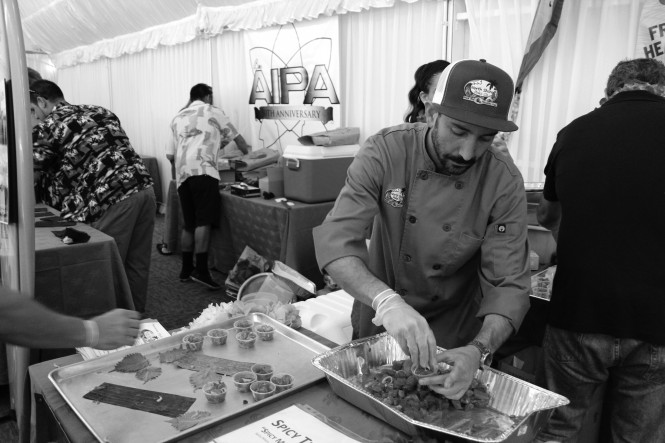 The third annual ‘I Love Poke’ Festival proves mainlanders have an appetite for poke.

Poke might’ve made landfall here in the states some time ago, but not until recently has the indigenous cubed ahi dish become very popular with mainlanders. In fact, this Hawaiian bowl of deliciousness is on the foodie fad rise now.

The annual sold-out “I Love Poke” Festival celebrated this remixed sashimi with 500 guests and volunteers June 30at the Hilton Waterfront Beach Resort in Huntington Beach, Calif. Although tickets were a hefty $65 to sample 19 food stations, it was the closest substitute to booking a flight to Hawaii and eating some darn good poke.

“I always knew poke was a hot item, but people just weren’t getting good poke,” festival founder Nino Camilo explained. “We’re not in Hawaii, but I love the fact that food brings people together, and I wanted an event where we could pretend we’re in Hawaii for a night.”

Camilo started his food blog www.ilovemusubi.com(ITAL) in 2009 while working in surf marketing as his day job before hosting the first “I Love Poke” Festival in San Diego that same year.

Growing up in San Diego, Camilo was heavily influenced with the Hawaiian culture — from participating in hula competitions to surfing along the California coast. His love of eating and surfing married together for Camilo into festivals like “I Love Poke” and Mabuhay San Diego, a fundraiser for the victims of Typhoon Haiyan in the Philippines.

“It’s just such a simple dish, but it’s just so good,” Chef Justin Shea, owner of Hapa J’s in San Clemente, Calif., and a vendor at this year’s festival. “There’s that subtle crunch with the onion and seaweed and the softness of the ahi. I just instantly think of Hawaii and my memories from the islands because it has that salty beach kick to it.”

Hapa J’s is named after Shea’s son, Jaedon, who is half-Irish and half-Hawaiian. While “hapa” is traditionally a Japanese term to describe individuals who are half-white and half-Japanese, the restaurant’s name is more of a play-on of mixing everything. For Shea, fusion was everywhere in Hawaii, but he found a large disconnect between fine dining at Roy’s and a run down local shack. Both offered fantastic food, but what was in the middle? Poke.