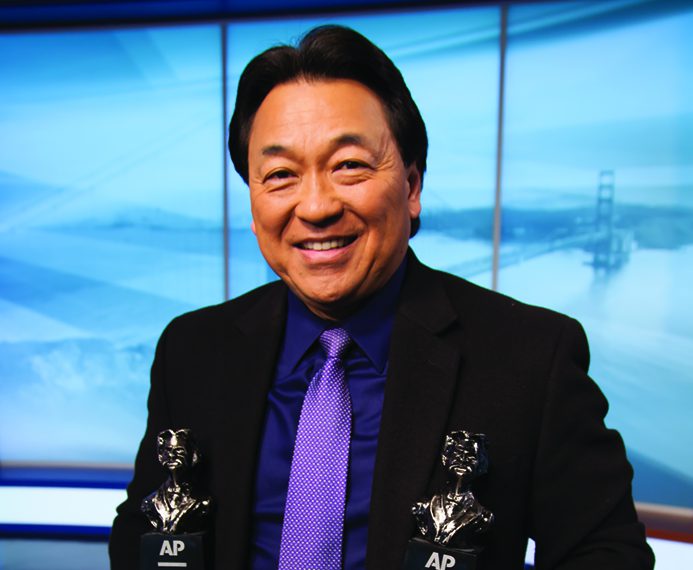 Robert Handa displays the pair of awards he received from the Associated Press Television and Radio Assn.  One was the Mark Twain “2015 Chris Harris Reporter of the Year” award and the other was the AP Mark Twain Award for “Best Coverage of an Ongoing Story” for a series on the delayed construction of the $300 million expansion to the Santa Clara Valley Medical Center. (Photo: Rory Campbell)

The NBC Bay Area reporter/host is named ‘Reporter of the Year’ by the Associated Press Television and Radio Assn.

As the nation begins to commemorate the 75th anniversary of the signing of Executive Order 9066, which put 120,000 Japanese and Japanese Americans into incarceration camps during World War II, Robert Handa’s success story is a direct reflection of what children of camp descendants learned from their families about the incarceration experience and how it affects their perspectives on life today. 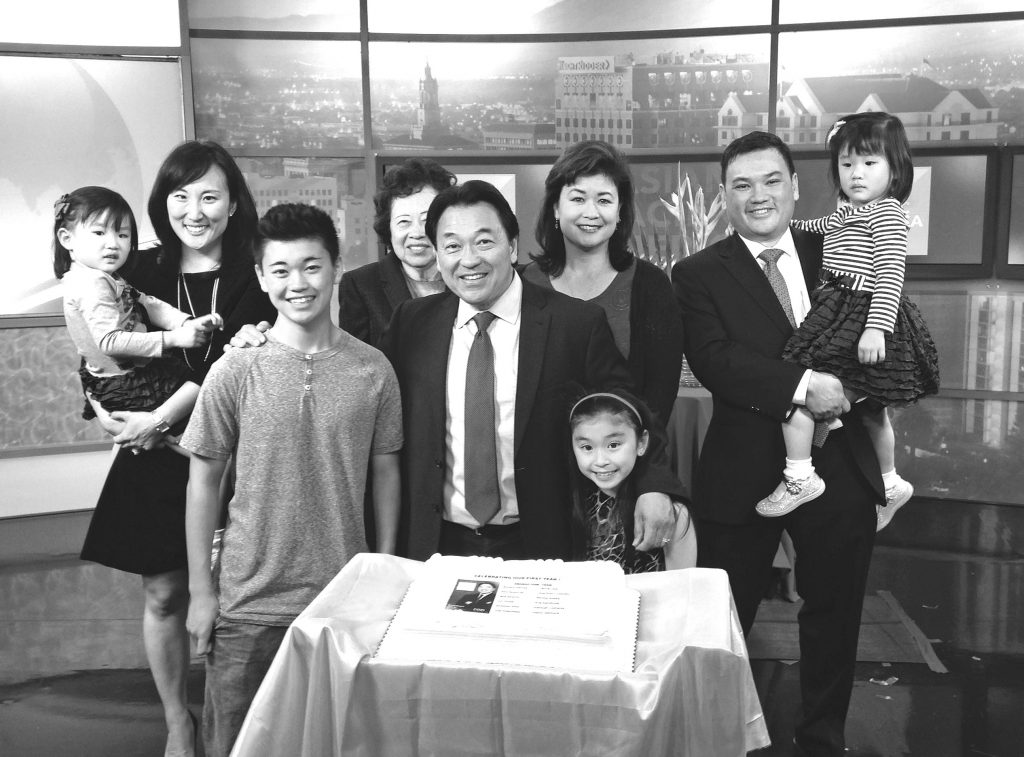 A familiar face to those that live in the greater San Francisco Bay Area, Handa is a TV reporter for KNTV NBC Bay Area News on the 5, 6 and 11 p.m. newscasts, as well as the executive producer and host of the station’s weekly half-hour show “Asian Pacific America With Robert Handa.”

Currently, it is the only running Asian cultural affairs show on network television in the Bay Area. Handa joined NBC Bay Area in June 2014 — returning to the station where he began his career more than three decades ago.

Handa’s grandfather, Sukeji Handa, immigrated to the Santa Clara Valley from Japan’s Yamaguchi Prefecture in 1906 as a farm laborer. He then went back to his hometown in Naruto-mura to marry his bride, Chiseko, and he brought her back to the United States in 1924.

“I really feel I saw both sides of the war situation through my parents. My father, Albert, was the youngest among four boys and one girl that died at birth, and he rarely showed much bitterness or resentment about his experience. Instead, he and my uncles, Donald, Ernest and James, talked about their time at the Heart Mountain Relocation Camp in Wyoming, through the eyes of young men and boys focusing on the challenge and the adventure of their experience through Boy Scouts and being on camp baseball teams.

“I remember being impressed that they seemed to have come out of it with a sense of strength and determination,” Handa continued, “but every once in a while, I sensed a flash of anger at the injustice of what happened.”

Handa continued, “My grandparents, their children and my parents were, as you might expect, more affected by the ordeal. Although they recovered from the loss of one farm with a successful farm after camp, I remember asking them about the incarceration and getting a very intensely negative reaction. They would shake their heads and mutter what were obviously angry remarks in Japanese of the distrust they felt after WWII. I recall, distinctly, running into my grandparents at a shopping center with my then-girlfriend, who was Caucasian. They smiled and were very polite, but later, my father told me they called him and were upset at what they saw. I was surprised and even a bit bemused by it all, then, but it would be years later that I would truly understand the depth of their reaction to what happened as a result of their internment.

“When I say I saw both sides,” Handa recalled, “it’s because my mother, Harumi, was born and raised in Japan. The main memories, I have, of her early stories of the war were from the Japan side and her seeing the color of the sky as she saw one of the atomic bomb blasts. She had a childlike sense of wonderment at what was actually a horrifying event, and I recall her stories of how Japan reacted to being a defeated country.

“In having both an American citizen father of Japanese descent and a Japanese mother, I could begin to understand, at an early age, what both sides faced with the effects of the incarceration of Japanese Americans and the war against Japan during WWII,” Handa said. “My grandfather came to this country 111 years ago to start a new life and decided to raise his family here as an immigrant. Even with everything they lost, my grandfather applied for U.S. citizenship at the age of 64, and he became a citizen despite his internment at the Pomona Assembly Center and then at Heart Mountain. His allegiance never wavered,” Handa added.

Being a Sansei or third-generation Japanese American, Handa has continued to be a role model for younger-generation Asian Americans. A South Bay native, he attended De Anza College in Cupertino, Calif., and won a journalism contest for an internship at KNTV Channel 11 — a moment that he describes as the first real step toward his broadcast journalism career.

That internship eventually turned into a part-time job while he attended San Jose State University. Later, Handa became the station’s first Asian American reporter — joining a small group of other Bay Area TV reporters who had earned the same distinction.

A four-time Emmy Award winner, Handa was honored last year at an AP awards ceremony in Los Angeles with the prestigious Mark Twain “2015 Chris Harris Reporter of the Year” award by the Associated Press Television and Radio Assn. in its annual competition among radio and TV stations in 13 western states. He was also recognized, that same evening, with the AP Mark Twain Award for “Best Coverage of an Ongoing Story” for a series on the delayed construction of the $300 million expansion to the Santa Clara Valley Medical Center.

In 2016, Robert Handa was inducted into the National Academy of Television Arts and Sciences San Francisco/Northern California Chapter’s Silver Circle for his career at KTVU 2 and KNTV NBC Bay Area. Handa worked at KTVU as the station’s South Bay Reporter for 16 years. He’s also worked as a reporter and fill-in anchor at KPIX in San Francisco and reporter/documentary producer for KQED-TV.

“I had always wanted to do a news/entertainment show that focused on Asian Americans since I felt our community needed a show like this to highlight the wonderful diversity and stories we have to offer,” Handa said.

Launched in September 2014 a few months after Handa had returned to KNTV NBC Bay Area, he was flattered to have his name in the title, but he also felt the pressure to make sure the show was unique, relevant and successful. The production team expanded their show with a determination to build it from the inside out and had a goal of covering groups, issues and communities that did not get mainstream coverage.

“Our show is about the community, not just for the community,” according to Handa. “It’s a tough line to walk, but, frankly, that’s what makes it interesting and fun. I grew up fully aware that Asian and Pacific Islander people in the ‘arts’ got very little recognition or an opportunity to display their talents. The lack of Asians and Pacific Islanders in movies, on TV and in entertainment venues is just one glaring example. So, we have a tradition on the show of spotlighting an artistic or cultural act every week. Whether it’s YouTube artists or groups bridging the old with the new such as taiko groups or the Firebird Youth Chinese Orchestra, we also feature local performers preserving and passing on the cultural arts. We never seem to run out of talent to showcase.”

With help, support and guidance from Coordinating Producer Lance Lew, Associate Producer Joachim Custodio and photographer Glenn Iyemura, “Asian Pacific America” has been able to meet those standards. They have had the luxury of not worrying about ratings too much but have been gratified to see how well the show is doing and growing its audience base significantly.

“One thing that’s important to point out is that the studio crew has, for the most part, been with us from Day 1, and it is like an ‘Asian Pacific America’ family. We enjoy pulling off the creative and unusual formats as we do. Celebrating over two years of being on the air and producing our 100th show last year, we have started to do remotes in San Francisco’s Chinatown and at Angel Island. It’s bringing a new dimension to the show and allows us to show more of our communities,” Handa said. 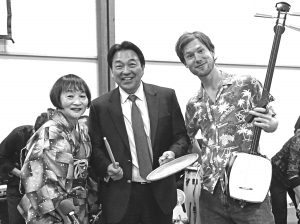 Robert Handa, center, with Shirley Muramoto-Wong and Kyle Abbott, at the screening of “Hidden Legacy: Japanese Traditional Performing Arts in the WWII Internment Camps,” an event he MC’d at the Wesley United Methodist Church in San Jose, Calif.

In addition to his reporting, producing and hosting duties, Handa stays active in his local community as a member of many Bay Area organizations, including AAJA, KIMOCHI, Self-Help for the Elderly, Yu Ai Kai Japanese American Community Senior Service and Asian Americans for Community Involvement.

“As we begin to see Day of Remembrance observances throughout this country on Feb. 19, I feel it is important to acknowledge the collective strength and determination of those who endured the incarceration ordeal. They deserve credit for the emotional foundation that helped future generations assimilate, thrive and prosper,” Handa concluded.

Handa’s story is a great example of how Japanese American journalists continue to make strides, as their families did, for future generations.

To see photos and clips from the show, visit “Asian Pacific America’s” Facebook page at https://facebook.com/asianpacificamerica.