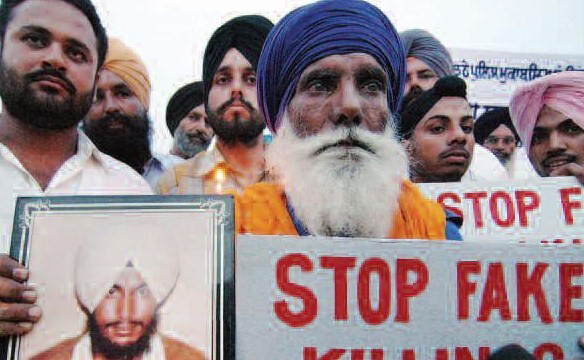 Sacramento Holds Forum on the 1984 Sikh Genocide in India

Protesters in India rally against the killing of Sikhs and the ensuing government cover up. Photo courtesy of ensaaf

By Andy Noguchi, Civil Rights Co-Chair of the Florin JACL

The 1984 slaughter of thousands of Sikhs in India horrified a Sacramento crowd of 75, including many elected officials and 15 other Asian and Pacific Islander American reps supporting the Sikh community, at the “Remembering the 1984 Anti-Sikh Pogroms” forum on July 16, which was sponsored by the American Sikh Political Action Committee along with Amar Shergill and Darshan Mundy. November marks the 30th anniversary of the Sikh genocide in India.

Sikhs are the fifth-largest world religion and concentrated in the Punjab State of India, where they make up about 2 percent of the country’s population. Men are often distinguished by beards and turbans, a sign of their religious devotion.

There are 23 million Sikhs worldwide, including 500,000 in the U.S. according to statistics presented at the forum. “Ninety-nine percent of those wearing turbans in the U.S. are Sikhs,” explained one speaker. The Sikh American community, facing unfair backlash after 9/11, have been key pillars of civil and human rights efforts in recent years.

Sikhs in India have a long history of pushing for equality, democracy, freedom and autonomy, as shown in their Anandpur Resolution of 1973. Some Sikhs have advocated for full independence.

The ruling Indian government strongly repressed this movement, often resulting in tragedy. This included the June 1984 military attack ordered by Prime Minister Indira Gandhi against the holy Sikh Golden Temple that killed an estimated 3,000 people; the October assassination of Gandhi by her two Sikh bodyguards; and the November massacre of thousands of innocent Sikhs, including more than 3,000 in the capital of New Delhi.

Local veterinarian Gupreet Singh told the forum of his experiences when he was a 15 year old in New Delhi. He saw mobs chasing and attacking Sikhs in the park. Some people were saved only due to compassionate Hindu neighbors who were able to hide them.

Elk Grove Unified School Board member Bobbi Singh Allen, who is a Sikh, shared that on a 1988 family trip to India, the police were still ominously looking for her outspoken Sikh father. Allen said that “our government apologized to the Native Americans and Japanese Americans, so must the Indian government.”

In 2010, Sikh religious leaders labeled the mass murder of these innocent men, women and children as “genocide carried out to eliminate Sikhs from the country.”

The Indian Central Bureau of Investigation finally concluded in a 2012 report that the ruling Congress party and New Delhi police had organized and backed the 1984 massacre. “Of 32 members of the Congress Party identified (in the attacks), no case against them was ever brought,” stated forum speaker Bachittar Singh of Ensaaf, a human rights group seeking justice for the victims.

Several community groups attended the event, including the Chinese American Council of Sacramento, which was represented by leaders Honey Lum, Joyce Eng and Alex Eng. Joyce Eng commented that unknown to her and other Americans at the time, these atrocities were “perpetrated by elected officials and law enforcement agents. This is a horrific crime and should not be tolerated by anybody.”

Yamada has been an especially strong backer of the Sikh community, saying that “the first step toward reconciliation is acknowledging the facts.” Yamada also sponsored the successful 2012 California Workplace Religious Freedom Act to help prevent discrimination against Sikh, Muslim and Jewish religious dress.

Amar Shergill wrote that community friends need to understand “the significant role that the events of 1984 continue to play in the lives of local Sikhs. Many families in our region were personally affected by the genocide and its aftermath.” He shared at the forum that there is currently a “growing right wing fundamentalist culture in India, putting Sikhs and other minorities at risk.”

Marielle Tsukamoto, president of the Florin JACL chapter and a young prisoner in the World War II concentration camps for Japanese Americans, agreed on the importance of defending human rights. Tsukamoto said that she learned something important at the forum and Americans have “an obligation to look beyond our borders.”

The American Sikh Political Action Committee continues to educate others through a public solidarity letter as the 30th anniversary of the 1984 massacre approaches in November.