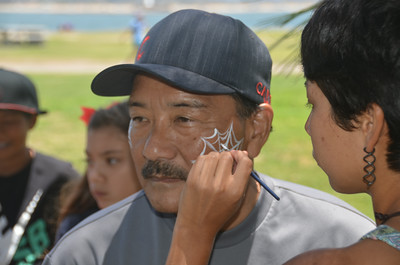 Annual picnic chairperson Robert Ito has his face painted during one of the day’s many family-friendly activities. Photo by Randy Okamura

Locals gather at the beach in the name of fun and family at the San Diego JACL’s annual picnic.

By Genevieve A. Suzuki, Contributor

The 2014 San Diego JACL’s annual picnic wasn’t a typical American picnic. Rather, it featured geta races, rice bags and Top Ramen for raffle, as well as free shave ice at East Crown Point Shores on June 29. Passersby and other beachgoers stopped to stare every now and then as approximately 300 attendees screamed with laughter during silly races and a rather creative opportunity drawing.

Last year, the picnic was a much more scaled-down event as the San Diego JACL took a one-year hiatus in its official hosting duties. This year, the chapter, in striving to bring back the family fun, knew just the man to make it happen.

Annual picnic chairperson Robert Ito, a second-generation JACL member, has been going to the picnic since he was a toddler. “I have a photo that was taken when I was about 3 years old at the Silver Strand,” said Ito, 63. “It’s been a community tradition for at least 60 years.”

Despite attending the picnic for six decades, this was the first year Ito served as chair. “I have always helped out for as long as I can remember by doing whatever needed to be done,” he said. “Driving the box truck the day before the picnic to pick up the water and soda, the prizes, the canopies, trash cans and anything else that needed to be taken to the picnic. Then the day of the picnic, I have always driven the trucks down to the picnic at 6 a.m. to make sure we get our area. Set-up and breakdown has always been my job.”

As chair, Ito’s goal was to restore the child-friendly atmosphere he enjoyed as a little boy. “As a 3-year-old at my first JACL picnic in the ’50s, I had fun. This year, we focused on having things that would be fun for a child under 5 years old. The first-time-ever face painter and inflatable bounce house were a huge success,” Ito said.

San Diego native Ito relied on members of his family and close friends to help him pull off the large-scale event. His cousin, Sandy Kobayashi, ran the opportunity drawing, which was comprised of numerous gift baskets crafted by picnic attendees. Tickets were drawn for each of the baskets, which varied in size and value. There were also prizes for three of the most popular baskets, with first place getting a wine-tasting gift certificate for up to 12 people.

Although there were some new things at the picnic, much of the tried and true was preserved. “Well, we’re still at the beach, but you don’t see the waves and we don’t have the perch fishing contest. We also had the annual geta races that are now the annual picnic trademark,” Ito said. “There’s been changes, sure, but what hasn’t changed is that it is still fun for families and the kids.”

San Diego JACL president Michael Kurima said he is grateful to Ito and his committee for successfully organizing the picnic. “It was wonderful to see the families and members of our Japanese American community come together once again for the annual picnic,” said Kurima. “For the JACL, it was an opportunity for us to get to know the community a little more, as many of the board members are new.”

And because several of the board members are fairly recent San Diego transplants, they and their families formed their own adopted family: the Ronin Clan.

“I loved the Ronin Clan idea,” said Alisha Tomita, treasurer of the San Diego JACL. “All of us without immediate family in San Diego have become family, and we welcome everyone openly to our clan. When I am missing my family the most in Northern California, I have my JACL ‘Ronin Clan.’”

Ito is already gearing up for next year’s event by taking note of what worked and what didn’t. Fortunately for all who attended the picnic, most of it was a complete success, save for the lack of an adequate number of Port-a-Potties.

When asked what his plans are for 2015’s picnic, Ito said, “A couple more Port-a-Potties, we’re going again with the face painter and inflatable house for the under-5 kids, games that will engage younger and older generations and, of course, the opportunity gift basket contest.”

Perhaps the best news is this year Ito more than accomplished what he set out to do. Five-year-old Quinn Suzuki said she will never forget her first JACL picnic: “I won some Silly Putty after I walked really fast with an egg on a spoon. I also got to eat spam musubi, make new friends and get my face painted. I can’t wait ’til next year!”