Change. It’s inevitable. As Americans enter into the second month of sheltering-in-place orders, people have learned how to adapt to this “new normal.” Although it seems like a bleak time, it’s also a space for creativity and innovation, an opportunity for growth, a chance to learn a new skill, reconnect with old friends or take some time for reflection.

At the San Jose JACL, innovation would prove to be necessary for the chapter’s second-annual pilgrimage to Manzanar. With the actual event canceled due to COVID-19, the chapter’s Manzanar committee knew it had to get creative. 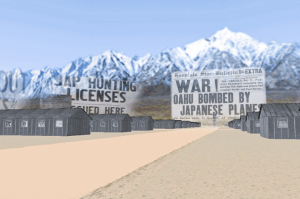 The chapter decided on a virtual tour for April 25 when its members found out that Tamiko Thiel and Zara Hashmoud, creators of the “Beyond Manzanar” virtual exhibit, were interested in joining the event.

Ideas started to flow, former incarcerees agreed to participate in a Q & A panel, leaders of the redress movement committed to talk about the fight for redress and reparations and a trainer from the Council of American Islamic Relations, San Francisco Bay Area, chapter agreed to provide bystander training. Another big component was including small group discussions that consisted of conversations with people of different backgrounds to talk about topics that are relevant to today, as well as to share histories — something that could not be left out because the conversations are always rich and full of different viewpoints. The San Jose JACL decided to separate the speakers and group discussions with a webinar series and smaller Zoom groups, thereby allowing the chapter to extend its program beyond its Silicon Valley roots and include participants from across the country and the world. As a result, the chapter drew more than 600 people throughout the six-hour event.

Kicking off the program was an art exhibit and a virtual reality tour of Manzanar by Hashmoud and Thiel. The program also included poetry by Sojin Takei, pictures from World War II featuring Thiel’s family, as well as a walk through an Iranian garden.

The presentation, both beautiful and haunting, demonstrated the parallels between the Iranian Hostage Crisis and the mass incarceration of Japanese Americans. It was a powerful analogy that set the tone for the rest of the presentations.

Up next were first-person accounts from former incarcerees Koichi Nishimura, Marge Taniwaki, Christine Umeda, Marielle Tsukamoto and Tom Oshidari, co-president of the San Jose JACL. They spoke about the hardships of living in camp, and while some did not have personal memories, most told of their parents and how talking and recounting the trials of incarceration were almost impossible for the Issei.

Nishimura told a heartbreaking story of his grandmother, who said that she “ … no longer had her dignity, and that no one could ever give that back”; tragically, she passed away before reparations were handed out.

The redress movement was another topic that was addressed by Susan Hayase and Tom Izu, who spoke about how the first pilgrimage to Manzanar and Tule Lake helped catalyze the grassroots organization of the reparations movement.

Sharing a video of Sue Tokushige’s 1980 testimony before Congress, the pilgrims saw first-hand the aftermath of incarceration in the Nisei generation. Tomio Hayase-Izu, Susan and Tom’s son, then gave participants ideas to think about for today. He spoke about House Resolution 40, a slavery reparations bill for African-Americans. He emphasized that Japanese Americans need to advocate for other communities as well.

Courtney Mangus rounded out the program with a thorough training on how to be good bystanders in the community and what to do in the event of seeing someone being harassed. Mangus also highlighted the importance of putting the target first and letting him/her decide how to react to the situation.

Following a dinner break, about 100 participants took part in small group discussions to summarize what they had learned during the webinar. Bringing up various topics of justice and solidarity, a superstar team of facilitators from across the West Coast helped the chapter wrap up the day.

The San Jose JACL was blown away by the sheer amount of people that attended. The chapter is extremely pleased that it was able to create something fresh and new during this difficult and challenging time. Although Americans are separated by the six-foot distance rule, people can still come together and bring solidarity to the Japanese American community and beyond.

Note: The San Jose JACL would like to acknowledge special appreciation to Melanie Shojinaga, Madison Tamaichi and Susan Yuen for rising to the challenge of revamping the initial Manzanar Pilgrimage into this special, highly successful virtual experience.