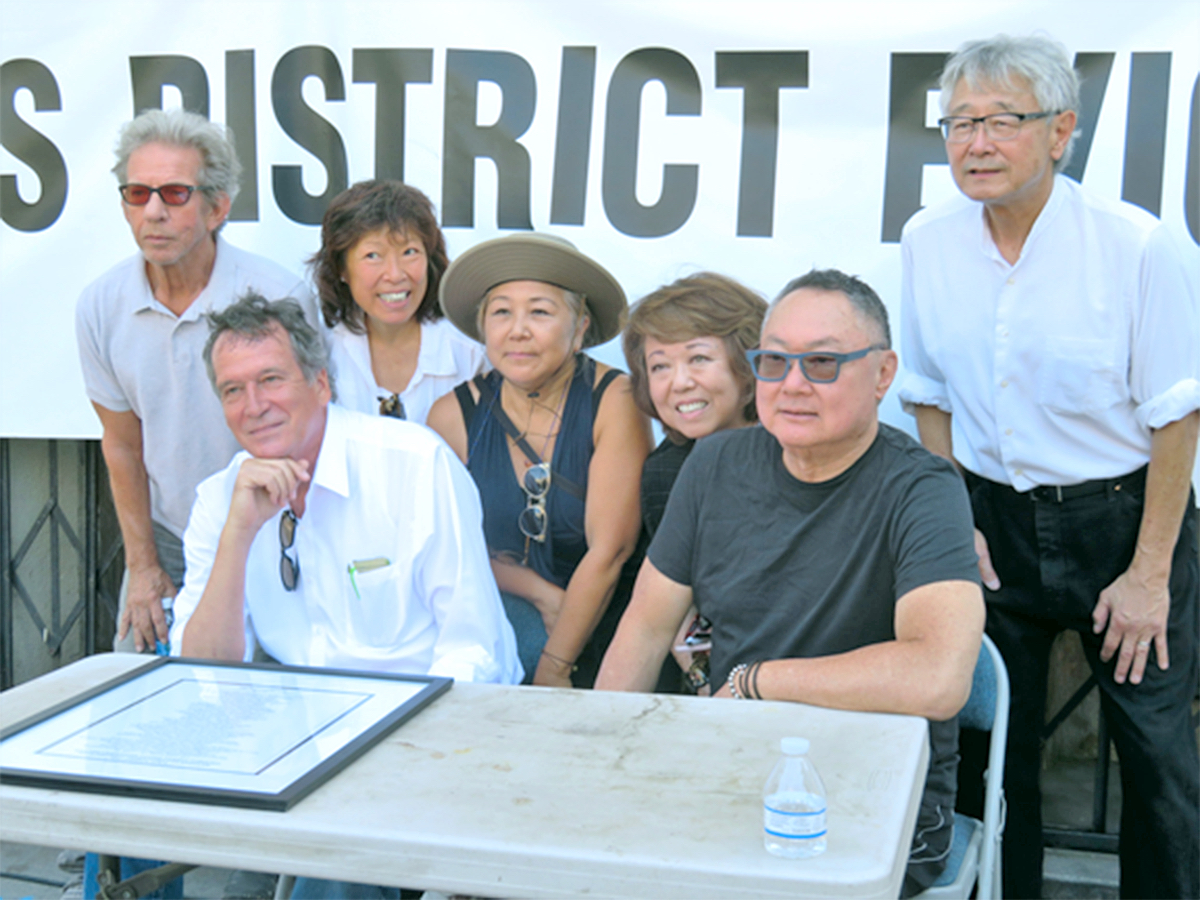 A rally is held to support eight artists who are facing eviction from their longtime homes.

A coalition of Little Tokyo and Arts District stakeholders held a spirited rally to support eight artists facing eviction from their homes at 800 Traction Ave. in the Arts District of Los Angeles on July 29.

Many of the artists facing eviction are Japanese and Japanese American seniors, longtime community artists who have enriched the cultural life of Little Tokyo. Their presence in the area since the early 1980s has been fundamental to the creation of what is now known as the Arts District. Now in their senior years, they face the threat of eviction in one month by DLJ Real Estate Capital Partners (owned by Credit Suisse), which recently purchased the building.

More than 100 supporters gathered at 800 Traction Ave. to show their solidarity with the artists and expose the underside of gentrification as a continued destruction of the dwindling number of historic cultural centers.

Gentrification has eliminated most of the working artists who gave the Arts District its name and identity as a creative, cultural enclave. In their place are upscale apartments, offices, retail shops, galleries, restaurants and bars — leaving an Arts District with no artists.

In 1983, Nancy Uyemura, a mixed-media artist, and Mike Kanemitsu, an abstract expressionist, moved into a loft at 800 Traction Ave. in what was then still part of Little Tokyo.

Back then, the building was an old warehouse. They built it out — putting in walls, then a kitchen, bath, electrical and plumbing.

“Our dreams were to make art and to build a community and just live creatively,” Uyemura said. “… to just ask us to leave like in a month without any kind of relocation assistance — there’s something wrong about that.”

Photographer Jaimee Itagaki needed a larger space for shooting and began looking for a loft. Uyemura told her about an available space at 800 Traction Ave. and in 1997, Itagaki moved in. And now the threat of eviction is devastating to her.

“The history of the location, the character of the buildings and textures all were art inspiring!” Itagaki exclaimed. “If I don’t live in a loft space as a creative person, and to not have the creative community … my life will require a huge adjustment. So much so, I can’t even say or imagine.”

Stanley Baden and Aiko Sasaki Baden have lived at 800 Traction Ave. for 24 years. They saw it as a space where they could both reside and pursue their art simultaneously.

“We have stayed in the area because we enjoy the Japanese culture represented in Little Tokyo and its close proximity to the Los Angeles art exhibition and academic institutions,” Stanley Baden said. “In our space, we have a fine art printmaking studio where we produce our own work and the work of other artists, including artists that have been pivotal influences in the global art scene.”

Little Tokyo has survived 75 years of evictions: the unjust incarceration of Americans of Japanese ancestry into World War II concentration camps; tenants and residents forced out by big business in the 1970s and ’80s; and the gentrification during the 2000s slowly ripping out the cultural heart and soul of Little Tokyo.

The artists and their supporters are calling upon DLJ Real Estate Capital Partners to cease their attempts to evict the residents at 800 Traction Ave. The artists are also requesting a meeting with Andrew Rifkin, DLJ managing partner, to speak directly with the Traction residents prior to the Aug. 31 eviction date in order to personally address their concerns.

“At this late point in my career and age, it is incredibly debilitating to have to move my art practice let alone to find another studio,” said multimedia artist Bruce Yonemoto, who moved into 800 Traction St. in 1999. “It is ironic that on the 75th anniversary of the Japanese American concentration camps, we are once again being evicted from the same community, Little Tokyo.”

Petitions are being circulated online at: https://www.gopetition.com/petitions/stop-the-evictions-at-800-traction-avenue.html

For information on opportunities to get involved and to be notified about future events in support of the Traction Artists, contact Taiji Miyagawa, coalition chair, at whattup@taijim.com.