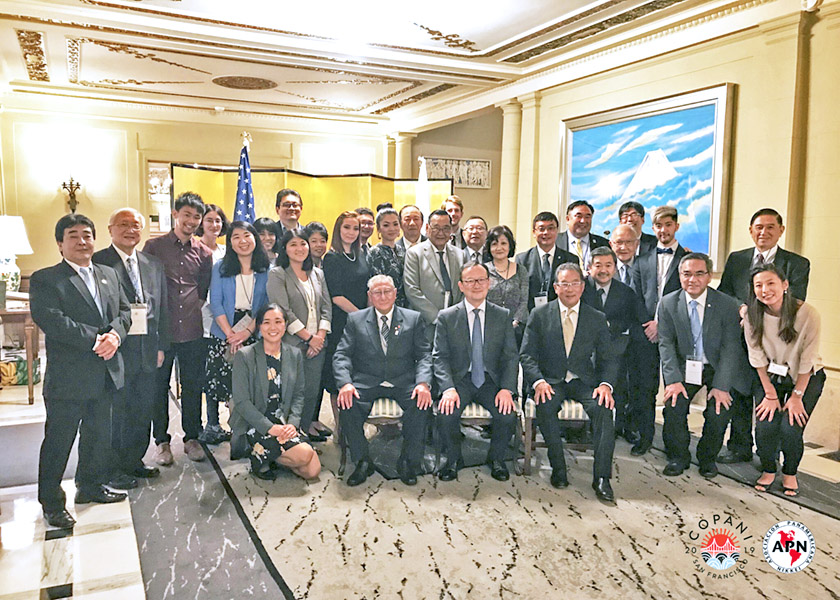 The COPANI 2019 Organizing Committee with the APN (PANA) delegates at the official residence of the Consul General of Japan in San Francisco after the APN delegates meeting and site inspection in September 2018. Sitting (from left) are APN President Fernando Suenaga, Consul General Tomochika Uyama and  COPANI 2019 Organizing Committee President  Roji Oyama. (Photo: COPANI)

The international convention is set to be held in San Francisco’s Japantown the weekend of Sept 20-22.

SAN FRANCISCO — In case you haven’t heard of COPANI, it stands for the Spanish words Convención Panamericana Nikkei, which translates to Pan American  Nikkei Convention. It is the destination conference for international  Nikkeis – Japanese descendants – from  all across the Americas, bringing together hundreds of people from more than 14 countries. Although  it is not well known here in the  United States, it has been held every two years since 1981 in a member country of the Asociación Panamericana Nikkei (APN) or Pan American Nikkei Association (PANA).

At the previous COPANI in Lima, Peru, in 2017, APN delegates chose San Francisco, a city known for its rich and diverse history and home to one of only three remaining Japantowns in the United States, to host the next convention. 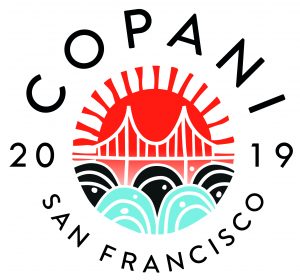 Previously held in Los Angeles in 1989 and New York City in 2001, this convention is returning to the U.S. for the first time in 18 years. Set for Sept. 20-22, COPANI XX will aim to continue the tradition of exchanging experiences and knowledge by bringing new visions, ideas and opportunities to various communities with a forward-thinking San Francisco approach to technology.

This year’s organizing committee is being led by President Roji Oyama, who is looking forward to welcoming former U.S. Secretary of Commerce and U.S. Secretary of Transportation Norman Y. Mineta as the convention’s keynote speaker, as well as other guests including Art Miki, past president of the National Association of Japanese Canadians; Carole Hayashino, president emeritus of the Japanese Cultural Center of Hawaii; and Alberto Shunji Matsumoto, a consultant/scholar from Buenos Aires.

“This event will bring together Nikkei from Canada, Hawaii, Latin America, Japan and Europe,” said Oyama. “This event will offer a rare opportunity to engage with fellow Nikkei who share our ancestral roots but have had very unique and different immigrant experiences in their respective countries. Attending my first COPANI in Bolivia in 2003 totally transformed my own self-image and my perception of what it is to be Nikkei. The meaning of ‘Nikkei pride’ was redefined and expanded by my encounters.”

“As Nikkei, it’s important to improve current situations for a better future by learning about each other’s communities and exchanging ideas. The next COPANI happening in my hometown of San Francisco will be a great opportunity to share the Japanese American experience with new friends,” said COPANI VP Asuka Nagase, who attended COPANI for the first time in 2017 with COPANI Secretary Lesli Hamamoto.

Register today at copani.org to participate in this three-day, one-of-a-kind, international event packed with presentations, workshops on various topics and other activities.

Scheduled workshops will cover topics including social justice/civil rights (issues facing current communities and beyond), business (the Japanese value of ikigai and its significance to one’s career path), youth/young adult (the Nippon Foundation and Discovery Nikkei will present the Global Nikkei Survey on young Nikkei), community (Densho and Discovery Nikkei will present the importance of preserving community through documenting stories) and arts/culture (working with the National Japanese American Historical Society to present a virtual exhibit of up-and-coming young Nikkei artists).

The registration fee of $325 ($275 for youth/young adults) will go up as it gets closer to the event. Particiants are advised to book accommodations at or near Hotel Kabuki or Holiday Inn Golden Gateway soon.

On a first-come, first-serve basis, a limited number of registrants will be invited to attend the Welcome Cocktail Reception at the official residence of the Consul  General of Japan.

“Youth and young adults are encouraged to attend  as this event will be your chance to come together with others to help chart the future,” said Oyama.