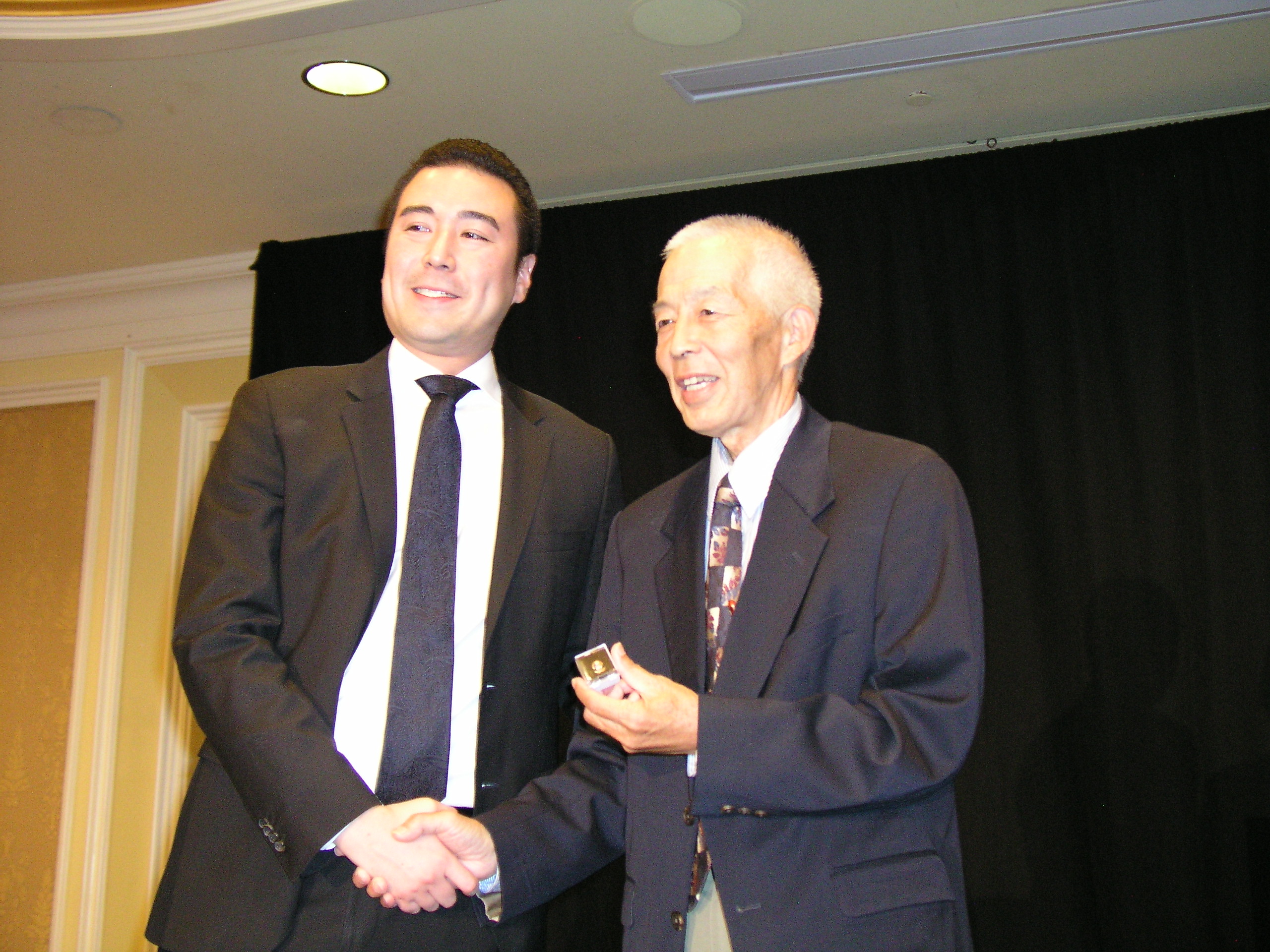 In recognition of many years of activity in, service to and leadership within the JACL that benefited the greater Japanese American and Asian American communities, JACL President Jeffrey Moy presented the Ruby Pin — the organization’s highest service award — to the San Francisco JACL Chapter’s Greg Marutani on Aug. 3 at the Little America Hotel in Salt Lake City.

Also honored at the Sayonara Banquet of the 2019 JACL National Convention were Sen. Mazie Hirono (D-Hawaii), who received in absentia the Ralph Carr Award, as well as basketball pioneer Wat Misaka and educator and labor activist Arlene Inouye, both of whom received the JACL’s President’s Award.

In his prepresentation remarks, Moy  recalled attending his first JACL National Board meeting and wondering just who was the guy delivering the lunches.

“Over the many years since, [Greg’s] been a constant presence at every board meeting in San Francisco, always willing to help, however he can,” Moy said. “As VP of Public Affairs, my role before this one, I got to know him a lot better, and I got to fully understand how passionate he is about education.”

After receiving his award, Marutani said his appreciation for receiving the award was not so much for his time but for “ . . . the work of the people who served on the Education Committee over the years.”

“As I told many people, I was the one person on that committee that was not in the education field. But I learned about primary sources, photos, double-checking your work — it made a difference,” Marutani said.  “I was the one that spent a lot of time reading up on things, providing the materials for the experts on my committee to work over and prepare the revisions to the Education Committee guide.

“I worked hard to try and make sure that things such as the ‘Power of Words’ handbook met the criteria for the group that pushed for the resolution some years ago and the need now, with the passage of Resolution 3, the recognition of the Tule Lake Resisters, I look forward to revising and updating the curriculum guide to deal with the term ‘no-no’ and recognize the significance it has to them as a derogatory term,” Marutani acknowledged.

Marutani closed his remarks by noting that the one project he is still trying to get off the ground is to develop a curriculum guide and learning activities to “focus on the story of redress” so students would learn not only about instances where their government  erred, such as what happened to Japanese Americans, but also learn that “redress worked because the Constitution provided for people  with a grievance to seek redress” — and he promised to continue to help provide lunch at National Board meetings.

The banquet, held in Ballrooms A, B and C, was co-emceed by actress Tamlyn Tomita (ABC’s “The Good Doctor”) and news anchor David Ono of KABC-TV in Los Angeles.

In his opening remarks, Ono referenced the then-breaking news of the mass killing in  El Paso, Texas, saying,  “… we need to get back to that country that is about the land of the free, where we’re open to people from other countries coming here and being American simply by accepting what an American is.”

Tomita then introduced Virgil Johnson, a former tribal chairman of the Confederated Tribes of the Goshute Nation, former tribal chair of the Eight Tribes in Utah and member of the Church of Jesus Christ of Latter-day Saints, who performed a smudging ceremony. 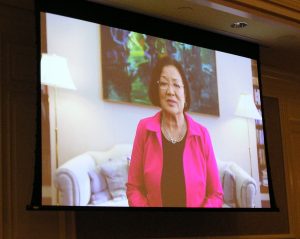 As noted, the JACL honored Hawaii’s Sen. Hirono with its Ralph Carr Award, which “epitomizes courageous action in the protection of civil rights,” named for the Colorado governor who, during WWII, welcomed voluntary Japanese American evacuees from the West Coast at great cost to his political career.

In his introduction to her prerecorded video message that was played for the audience, Moy said Hirono “has been a champion not only for Japanese Americans, but for education, health care, immigration and women’s rights.”

In her remarks, Hirono acknowledged the JACL for its decades of advocacy undertaken on behalf of people who have faced discrimination, and she also thanked the organization for singling her out, even though “there are so many of us fighting this administration’s horrible policies.” 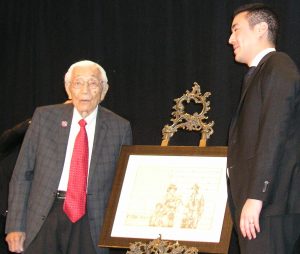 The next two honorees were Misaka and Inouye, who each received President’s Awards. Utah-born favorite son Misaka regained prominence following the eruption of Lin-sanity a few years ago when Jeremy Lin became a fleeting superstar on the NBA’s New York Knicks.

Basketball historians noted that the first Asian American (and first non-white) professional baller was Misaka, who was drafted by the Knicks in 1947.

In his remarks, the 95-year-old, who was also known as a skilled bowler and golfer, also showed he might have yet another career as a comedian.

“They asked me if I wanted to say anything. I said ‘No,’” said Misaka, which garnered laughs and applause.

The other President’s Award recipient was native Los Angeleno Inouye, who over the years has been a community organizer, human rights activist and a leader for progressive educational reform, as well as been employed as a Spanish bilingual speech and language specialist.

Inouye gained national prominence, however, during the January 2019 teachers’ strike as lead negotiator in contract talks between United Teacher Los Angeles and the Los Angeles Unified School District. In a victory for teachers, the result was smaller class sizes, more nurses, counselors, librarians, mental health professionals and a pay increase. 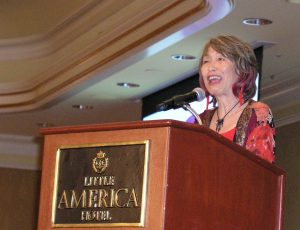 In a stirring acceptance speech that showed her  potential as a motivational speaker should her career in academia peter out, Inouye managed to combine the story of how the UTLA was able to claim victory — “We had 50, 60, 70, 80,000 people on the streets!” — with her family’s and her own personal life stories and struggles.

In one of a pair of announcements made during the evening’s proceedings, it was teased by Ono that his co-emcee, Tomita, may appear in Season 3 of the YouTube streaming series “Cobra Kai,” along with Yuji Okumoto, both of whom appeared in 1986’s “The Karate Kid Part 2.”

The other announcement was the location of next year’s JACL Convention, which is set for Las Vegas, Nev.