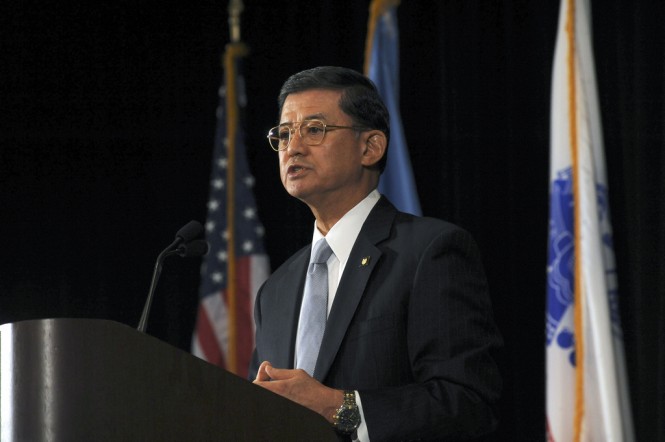 WASHINGTON, D.C. — Beset by growing evidence of patient delays and cover-ups, embattled Veterans Affairs Secretary Eric Shinseki resigned from President Barack Obama’s Cabinet on May 30, taking the blame for what he decried as a “lack of integrity” in the sprawling health care system for the nation’s military veterans.

Obama, under mounting pressure to act from fellow Democrats who are worried about political fallout in the fall elections, praised the retired four-star general and said he accepted his resignation with “considerable regret.” But the president, too, focused on increasingly troubling allegations of treatment delays and preventable deaths at veterans hospitals around the country.

Emerging from an Oval Office meeting with Shinseki, a stone-faced Obama said the secretary himself acknowledged he had become a distraction as the administration moves to address the VA’s troubles, and the president agreed with him.

“We don’t have time for distractions,” Obama said. “We need to fix the problem.”

One of Shinseki’s last acts as secretary was to hand the president an internal accounting that underscored just how big the problems have become. It showed that in some cases, VA schedulers have been pressured to fake information for reports to make waiting times for medical appointments look more favorable.

“It is totally unacceptable,” Obama said. “Our vets deserve the best. They’ve earned it.”

The president appointed Sloan Gibson, the No. 2 at the Veterans Affairs Department, as temporary secretary as the search for a permanent successor began. Obama also asked Rob Nabors, a top White House aide who has been dispatched to the VA to oversee a broad review, to stay for the time being.

Gibson, who has been Shinseki’s deputy for about three months, was formerly president and CEO of the USO, the nonprofit organization that provides programs and services to U.S. troops and their families. Gibson is the son of an Army Air Corpsman who served in World War II and the grandson of a World War I Army infantryman.

Republicans in Congress said the shake-up wasn’t enough to solve problems at an agency that has been struggling to keep up with a huge demand for its services — some 9 million enrolled now compared to 8 million in 2008. The influx comes from returning Iraq and Afghanistan veterans, aging Vietnam war vets who now have more health problems, a move by Congress to expand the number of those eligible for care and the migration of veterans to the VA during the last recession after they lost their jobs or switched to the VA when their private insurance became more expensive.

“One personnel change cannot be used as an excuse to paper over a systemic problem,” said House Speaker John Boehner (R-Ohio), who had held off in calling for Shinseki’s resignation. “Our veterans deserve better. We’ll hold the president accountable until he makes things right.”

The massive bureaucracy at the VA has come under intense scrutiny over the past month, following allegations that 40 patients died while awaiting care at a Phoenix hospital where employees kept a secret waiting list to cover up delays. On May 28, the VA inspector general reported that 1,700 veterans seeking treatment at the Phoenix facility were at risk of being “forgotten or lost.”

After that scathing report, a cascade of Democrats on the ballot in the fall midterm elections joined dozens of Republicans in calling for Shinseki to step down.

Administration officials said the combined pressure of the VA investigator’s troubling findings and the extreme focus on Shinseki’s status led Obama to conclude that the secretary would probably need to resign. But they said the president wanted to first allow Shinseki an opportunity to submit his own report to the White House, set in motion a series of firings in the agency, and speak to veterans at a long-planned appearance on May 30.

In his speech to the National Coalition for Homeless Veterans, Shinseki said, “I extend an apology to the people whom I care most deeply about — that’s the veterans of this great country — to their families and loved ones, who I have been honored to serve for over five years now. It’s the calling of a lifetime.”

The 71-year-old Shinseki said he had been “too trusting of some” in the VA system. He then headed to the White House to offer his resignation to the president during a 30-minute meeting.

Obama appeared to take no comfort in ousting Shinseki, a disabled Vietnam veteran and former Army chief of staff who has overseen the VA since the start of the Obama presidency. He called him “a good person who’s done exemplary work on our behalf.”

Problems at the VA date back well before Shinseki took the helm. The VA inspector general has issued 18 reports since 2005 that identified deficiencies in scheduling at both the national and local levels.

Congressional lawmakers are working on legislation that would seek to address those problems. Including a bill passed by the Republican-led House that would give the VA greater ability to fire up to 450 senior executives. The Democratic-controlled Senate is likely to debate a different version championed by Sen. Bernie Sanders (I-Vt.).

In his final remarks as secretary, Shinseki asked Congress to support Sanders’ legislation. He also announced that the government would not give any VA performance bonuses this year and would use all authorities it has against those “who instigated or tolerated” the falsification of wait-time records.