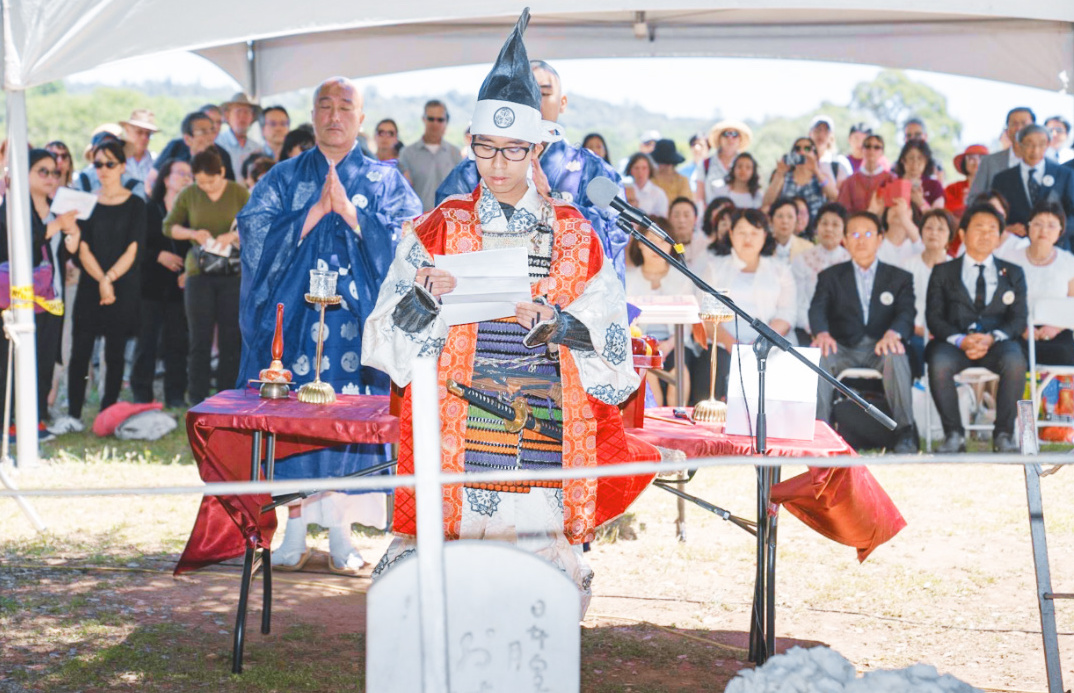 Prince Chikamori Matsudaira, wearing the traditional costume of his samurai lord ancestors, pays his respects at the graveside of Okei-san. (Photo: Mark Shigenaga)

PLACERVILLE, Calif. — WakamatsuFest150 was held recently to celebrate Japanese American heritage, arts and cuisine at Wakamatsu Farm and recognize the 150th anniversary of the first Japanese pioneers’ arrival in Placerville, where they established the first Japanese colony in America in June 1869.

In all, more than 4,000 visitors, performers, artists, vendors and volunteers joined WakamatsuFest150 over the course of the three-day event from June 6-9. The site itself is listed on the National Register of Historic Places and was declared California Registered Historic Landmark #815 during the June 1965 centennial celebrations hosted 50 years ago at Wakamatsu Farm.

A Buddhist service was also conducted each day at the gravesite of Okei-san, the first Japanese woman and immigrant buried on American soil. Her gravesite is the main reason why the Wakamatsu story has survived over the past 150 years.

Dignitaries from Japan also joined the festivities, including Japanese Parliament Member Shinji Oguma and Tomochika Uyama, the consul general of Japan in San Francisco. Also on hand was special guest and lecturer Iehiro Tokugawa, heir of the Tokugawa Shogunate whose ancestors ruled Japan for more than 260 years, and Chikamori Matsudaira, the 15th heir of the Matsudaira clan family who is referred to as a “prince,” participated in the weekend events wearing the traditional costume of his samurai lord ancestors. 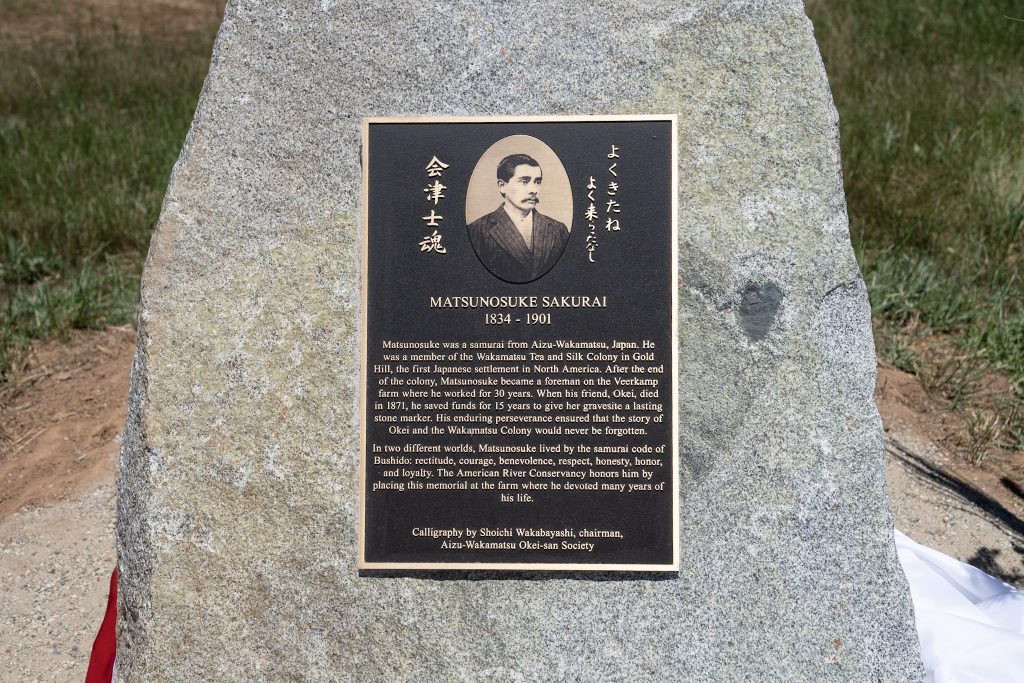 A memorial to Matsunosuke Sakurai was also unveiled during the festivities. Sakurai, a samurai from Aizu-Wakamatsu, Japan, was a member of the Wakamatsu Tea and Silk Colony in Gold Hill. When his friend, Okei, died in 1871, he saved funds for 15 years to give her gravesite a lasting stone marker. (Photo: Mark Shigenaga)

On June 8, the exact 150th anniversary date, all distinguished visitors from Japan met several descendants of Wakamatsu colonists from both America and Japan. The occasion represented a full-circle reunion in the Japanese immigration story when the descendants of nobles and commoners of Wakamatsu history finally met at their “Plymouth Rock” landing site in America.

During that moment, Prince Matsudaira presented the Wakamatsu Colony descendants with sake and samurai swords made in Japan.

To bring the Wakamatsu story alive during the festival, audiences enjoyed daily performances of the live-action play “Gold Hill Samurai.” In addition, docents were posted at history stations throughout the farm to support self-guided tours.

Artifacts were also on display in the historic Graner House, which included a gold-threaded banner and 14th-century samurai dagger left by the Wakamatsu Colonists and three volumes of Commodore Perry’s ship logs.

In addition, ARC distributed more than 6,000 copies of the 16-page festival program before and during the festival that delved into greater details the history of the farm and the festival itinerary.