Being a Japanese American often means feeling like an outsider, whether it’s in the United States or even in Japan, author Shirley Ann Higuchi told an Oct. 31 audience at Japan’s Josai International University. 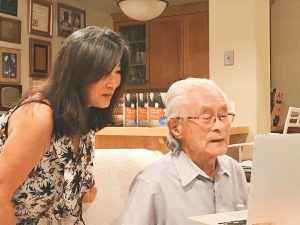 Shirley Ann Higuchi with her father, Dr. William Higuchi, as he says a surprise “hello” to his former students, Dr. Kenji Sugibayashi and others who were in the audience. (Photos: Heart Mountain Wyoming Foundation)

Higuchi, author of the new book “Setsuko’s Secret: Heart Mountain and the Legacy of the Japanese American Incarceration,” joined former Heart Mountain incarceree Sam Mihara for the presentation to about 300 Josai students, faculty and affiliates from around the world.

“When I visit Japan, I don’t completely fit in,” Higuchi said in response to a question from a Japanese student who had spent much of his life in Australia before returning to Japan. “I understand your concept of feeling like an outsider.”

Mihara, who grew up in San Francisco, was childhood friends with Higuchi’s mother, Setsuko Saito Higuchi, in the city and in Heart Mountain. It was Higuchi’s discovery when her mother was dying in 2005 that she had donated a large amount of money to Heart Mountain, which then led to her eventually becoming the chair of the Heart Mountain board and deciding to write her book.

Mihara said his family suffered from their incarceration at Heart Mountain. “My point is that it was not humane for the government to put us in such a place without adequate treatment,” Mihara said.

His family’s history at Heart Mountain is one of the reasons Mihara has visited and protested at immigrant detention sites along the U.S.-Mexico border.

Higuchi said one of the main themes of her book is to lift the secrecy that has surrounded much of the incarceration from younger generations of Japanese Americans.

“The Japanese Americans were very quiet about it,” she told the audience. “They were ashamed and didn’t speak out much.”

That silence meant the younger generations didn’t understand their history, she said, which is something she, Mihara and the HMWF are trying to change.

As the U.S. government continues to separate immigrant families at the border and house asylum seekers in for-profit prisons, both speakers said it is important for citizens and students to go beyond government claims to find the truth. 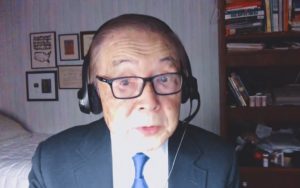 Mihara said the U.S. government during World War II tried to sugarcoat what was happening to the 120,000 Japanese Americans who were in incarceration sites around the country.

“The problem is if you only show smiling faces,” he said, “it’s propaganda. It’s not right.”

Higuchi said her mother always made Heart Mountain seem like a fun place because that was where she met her husband; the two were classmates. While she researched her book, Higuchi learned that much of life at Heart Mountain was anything but fun.

Higuchi and Mihara were invited to speak by Josai International University’s president, Dr. Kenji Sugibayashi, who was a graduate student of Higuchi’s father, Dr. William Higuchi, in the pharmaceutical sciences department at the University of Utah. 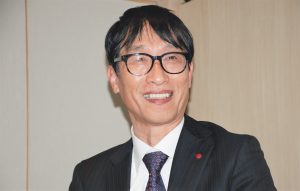 “Perhaps I am the one enjoying this the most,” Sugibayashi said. “I would like to understand more about Japanese Americans in the United States.”

Another sponsor was Dr. Tsuneji Nagai of Japan’s Academy of Pharmaceutical Science and Technology, who studied under William Higuchi at the University of Michigan in 1966.

Shirley Higuchi cited Nagai as an example of why it is so important for Japanese students to study abroad, so they can learn other cultures.