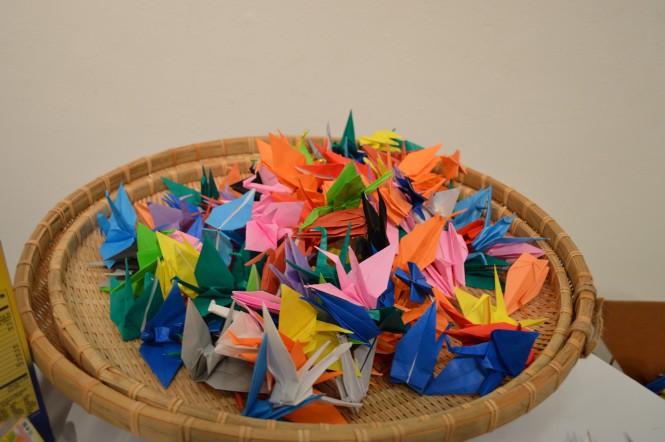 Shining a Light on Peace and Harmony

‘A star shining bright to shield from the cold, inori, inori, say a prayer for harmony.” Yuji Sasaki held a guitar in his arms, strumming and singing these words about compassion and harmony. The nephew of Sadako Sasaki, the young victim of the Hiroshima atomic bomb who attempted to fold 1,000 origami cranes in a symbol of peace, was a participant in the three-day festival “Remembering Sadako: Folding for Peace” at the Japanese American Cultural and Community Center. 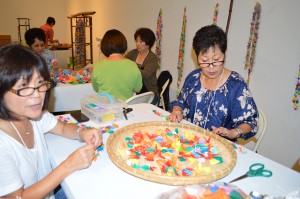 Held in the Little Tokyo neighborhood of Los Angeles from Aug. 1-3, the event brought together community members and performers in hopes of remembering Sadako Sasaki’s life and spreading her message of empathy and understanding.

One of the highlights of the weekend was a speaking event by Masahiro Sasaki, Sadako Sasaki’s older brother, who traveled from his home in Fukuoka, Japan, to present at the JACCC. Following the dropping of the atomic bomb in Hiroshima in 1945, his 12-year-old sister was diagnosed with leukemia and passed away in 1955. His presentation to the crowd in the JACCC’s Garden Room was moving and brought tears to those in attendance.

Sasaki was able to lead an intimate and engaging conversation at the “Remembering Sadako event,” something that hasn’t been done in the past. He recounted the bombing of Hiroshima, how flames engulfed his family’s home, leaving nothing but rubble. The bomb happened all in an instant, and people were left in disfigured form while iron, stone and glass were all melted in the blast.

“War provokes people to kill one another. It decays the human mind, it causes an affectionate heart of mercy to burst into scorching flames of hatred. Please remember that hatred only breeds hatred,” said Sasaki through a translator.

He spoke about his sister’s experience growing up and staying in the hospital for treatment. When she was diagnosed with subacute lymphocytic leukemia, she started to keep count of her white blood cell count without others knowing. Tracking this data helped her see how long she had left with family and friends.

“Despite knowing she had little time to live, she accepted it without complaint or bitterness. She was always calm and composed in her 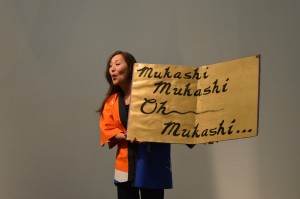 Keiko Kawashima of the Grateful Crane Ensemble performs for the audience of the “Remembering Sadako” event at the Japanese American Cultural and Community Center. Photo by Connie K. Ho

behavior, and she kept her pain and suffering wrapped in her little, compassionate heart. It was in this way that she showed us all a remarkable way in which to live,” Sasaki said.

Sadako Sasaki believed that if she folded 1,000 cranes, her wish would come true. She began to fold the cranes from wrappings of her medicine and gifts from visitors. She passed away before she was able to complete the 1,000 cranes, but her classmates helped to finish the remaining number and buried the cranes with her.

“We must continue to tell of these tragedies, however we should not speak with resentful hearts. In exchange for her life, this is the lesson Sadako has taught me, and so in her short life, this is what she has left behind,” Sasaki said.

One of the students who helped raise money for Sadako Sasaki’s monument in Hiroshima also spoke about her experience. During that time, 3,000 schools across Japan participated in the fundraiser. The grassroots efforts, which led to the construction of the Children’s Monument in Hiroshima Peace Park, were initiated in memory of the children who were lost in the atomic bombing.

“When I was in high school, she was about 12 and I was 18 years old, I went to high school in Hiroshima, and I heard about her sad story from our classmates. We all felt so sad, and we felt we had to do something to remember her struggle and then also let the other people know how important to say no more Hiroshima,” said Toshie Mosher of San Marino, Calif. “Sadako’s story became so big, and it inspired everybody, and so I still admire what she did. After I hear the story from Sadako’s brother, it makes me feel more admiration to her. I’m kind of hoping her legacy will spread all over the world, and then we will have a much more peaceful world.”

Later that night, the Concert for Peace was hosted at the Aratani Theatre in Little Tokyo. Grammy award-winning singer-songwriter Melissa Manchester took to the stage to perform famed hits such as “Through the Eyes of Love” and “Don’t Cry Out Loud.” She was joined by saxophonist Justin Klunk and multiinstrumentalist David Lindley.

“People that have attended really appreciated Melissa Manchester’s performance and the feeling she brought forth. She had been blogging all week about peace, posting on Facebook about her thoughts on peace, so it was nice to have her in the mix to help us spread the message,” said Leslie Ito, president and CEO of JACCC.

The song “Inori,” commemorating the life of his aunt Sadako Sasaki, was also performed by singer-songwriter Yuji Sasaki.

“Folding cranes one by one, she always believed, someday she would be free from the pain in her heart. In a world where peace would reign, no wars to be fought, and every child will find happiness,” he crooned. “She gazed into the night sky and made a wish, that someday she could be a shining star. Her light will guide the world to a better place, every one will live together in eternal peace and happiness.”

On the third day of the program, there was a live, interactive storytelling performance of Sadako Sasaki’s life presented by the Grateful Crane Ensemble in the Doizaki Gallery of the JACCC.

The group performed the children’s story “The Tortoise and the Hare,” as well as book songs like “Where Does the Wind Blow?”

“This event brings the community together to where everything started in a way,” said Candace Watase, a volunteer from Whittier, Calif.

The second annual celebration of peace also included a tea ceremony dedicated to peace, an interfaith ceremony and an origami-folding workshop. The JACCC aims to fold 3,000 cranes. Last year, one strand of paper cranes was sent to Sadako Sasaki’s elementary school and another strand was sent to a museum at Pearl Harbor in Hawaii. This year, the organization hopes to have one strand of paper cranes to keep in Los Angeles, another to be taken back to Hiroshima with the Sasaki family and a third strand will be given to the family of a “Remembering Sadako” committee member who recently passed away.

“I think the overall feeling and message was peace and children and really showing compassion to each other. I know that with the current world events, peace and a push for peace is a really important message, especially with what’s happening in the Middle East right now,” Ito said. “People really enjoy being a part of something, and it’s very tangible and it’s the act of participating in something bigger that really appeals to people. That’s what I’m really trying to do — to engage people in the arts and culture.”

In addition, the JACCC has been working on strengthening relations with key contacts in Japan for next year’s “Remembering Sadako” event. For 2015, the organization has plans to make the event even bigger as it is the 70th anniversary of the atomic bombing.

“We’re trying to build the relationship with Japan and the Consulate General of Los Angeles has been very supportive — building bridges across the country and really positioning Japanese Americans as that bridge between the two countries,” Ito said.