The JACL National Council votes in favor of adopting an amended version of Resolution 3 at the 50th National JACL Convention in Salt Lake City on Aug. 3. (Photo: Rob Buscher)

With those words, spoken by JACL Resolutions Committee Chair Joy Goto on Aug. 3 during the 2019 JACL National Convention in Salt Lake City, an amended version of Resolution 3 became reality.

With the “in favor of” votes overwhelming the “against” votes, it was an emotional ending to a JACL National Council meeting that began on Aug. 1 with the completion of voting on constitutional bylaw changes, paused on Aug. 2, and then carried over to and completed on Aug. 3 with voting on three resolutions.

With only two hours from 8-10 a.m. allotted to the unfinished business from Aug. 1, debate on R-3 was extended numerous times into the lunchtime hour and even included a failed proposal that needed to be voted upon to postpone a decision on R-3 until next year’s JACL National Convention. The final vote on the resolution arrived about 12:17 p.m. MDT. 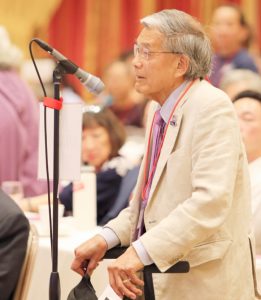 Among the three resolutions, however, R-3 was different because its purpose was to have JACL officially apologize for its stance toward an aggrieved subset — residents of the Tule Lake WRA Center — of a larger aggrieved group, namely ethnic Japanese whose rights were disregarded by the federal government during WWII.

With JACL marking the 90th year since its foundation in 1929, the passage of R-3 was an olive branch and birthday present of sorts to Japanese Americans whose families were incarcerated at the Tule Lake WRA Center, which was among the 10 “internment” camps operated by the federal government during WWII for American citizens of Japanese ancestry and legal resident aliens from Japan who were barred from becoming naturalized U.S. citizens.

To Japanese Americans and the authorities that operated the camps, Tule Lake, however, was popularly known as the camp where the “troublemakers” were sent.

According to the Japanese Americans who were incarcerated there, having been sent to Tule Lake during WWII was a scarlet letter of shame and stigma that unfairly marked them and their descendants. 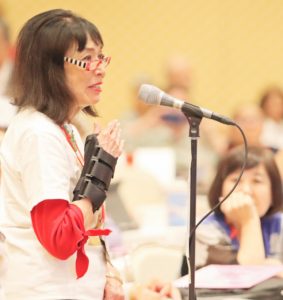 To WWII-era Japanese Americans striving to be seen as “good Japanese” by the U.S. government, Tule Lake residents who answered “no-no” to a pair of questions on a poorly worded loyalty questionnaire or dissented against having their rights violated were indeed troublemakers.

The result was a conflict that festered within the greater Japanese American community for decades to come, even after the success of the redress movement.

Since the convention’s start on July 31, proponents and opponents of R-3 met nightly to discuss ways to bring about an amicable end, however the vote might go. And before the start of business on Aug. 3, special time was set aside for a panel discussion to give National Council members more background context on R-3.

The panel was moderated by Paul Uyehara and featured activist/filmmaker Satsuki Ina, who also has a private psychotherapy  practice specializing in community trauma, and  Floyd Shimomura, an attorney and past JACL National President from 1982-84.

Ina, who was born in Tule Lake, recounted how the Loyalty Questionnaire brought about intense fear and confusion, ultimately pitting people in anger toward their government and eventually each other.

“People didn’t know why this questionnaire was being posed to them. They didn’t know what its purpose was because the government was not being forthright in what it was trying to do,” Ina said. “There was fear that this was a government strategy to get rid of anyone who opposed them. … It was a way to manipulate the prison population, a way for the government to reach its intended goals. The truth is, before the war, during the war and after the war, we never had a crisis of loyalty. What we had was a crisis of faith in our own country.”

Shimomura elaborated on the uncertainty that resulted from the questionnaire’s poorly worded structure, elaborating on its initial purpose to screen people for military service, even though that also included women and children from the age of 17.

“The primary problem was that the consequence of your answer was not clear. Why was the  government asking this question? … So, here you have a questionnaire that had the full range of maybe it will help you get out of camp, put you into prison or put you in the military, and you’re doing it in a very coercive environment, and people were already distrustful. This was a horrible, horrible thing to make people answer yes or no to,” he said.

When the people who answered “no no” arrived at Tule Lake, they were mixed with a population that was already previously there, known as the Old Tuleans, who didn’t want to be moved.

“Living conditions had degraded to a point where there was growing dissent and conflict. There were extremists on both sides of the camp,” said Ina. “It was the perfect pitch to get people to move their anger against the government away from that and toward each other. It was the perfect way for the government to control people who were oppressed.”

Regarding JACL’s role during that time, Shimomura spoke about JACL’s mission to support the war effort and be good, loyal American citizens.

“I think the loyalty side of the JACL campaign in a practical sense was successful and actually helped us in the redress campaign,” Shimomura said. “… I think the JACL needs to consider its own involvement in supporting this program during its loyalty campaign during WWII, which had positive effects, but this was something that was not intended but something that happened as a direct result of it.”

Decades later, intense feelings arose for and against R-3 during the National Council confab. 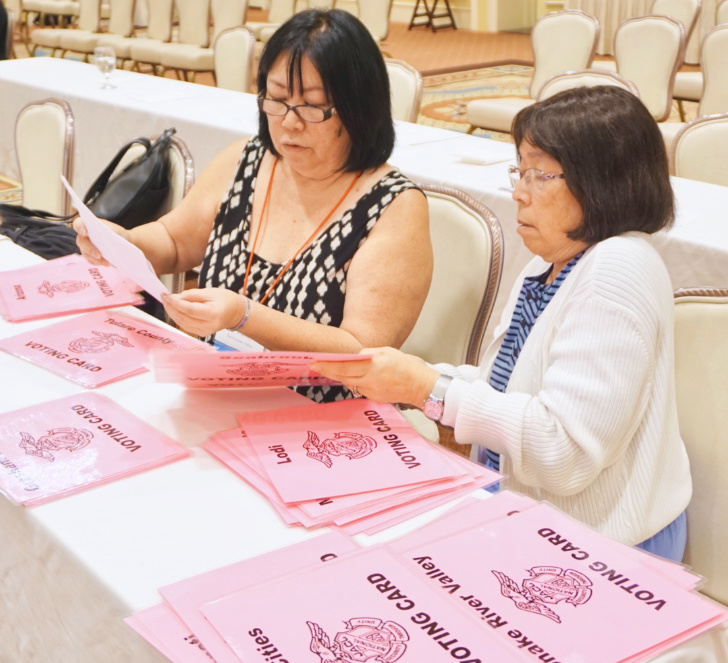 Some of those against R-3 said passage would compel them to quit JACL and warned that veterans groups would withdraw support for the organization.

Watsonville-Santa Cruz’s Marcia Hashimoto recounted how JACL leaders were beaten up by protestors and resisters, with others even labeled “dogs” for being pro-American. 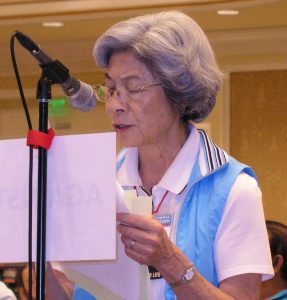 “This issue of a resolution of apology is complicated because of the effects of war on each of the incarcerees. The Watsonville-Santa Cruz chapter urges delegates to vote no on this resolution,” Hashimoto said. “If this resolution is in the spirit of reconciliation and unity, it needs to be more balanced to recognize the hardships of our veterans, all incarcerees and our JACL leaders.”

But those speaking in favor of R-3 outnumbered those against.

“We need to know that the JACL today will stand with us,” said Mike Ishii. “… Our entire community is submerged in intergenerational trauma imposed by an outside entity, and 76 years since the camps, we are still in distress. We have all made mistakes. … It is OK to say that. … The real enemy was never a Japanese American but racism. … We must begin treating one another differently.”

Echoed Stanley Shikuma: “Those who answered ‘yes yes’ or ‘no no’ or anything in between still suffer from the consequences from that questionnaire. It has created a split in our community that has carried on through generations. I can see that even Yonsei and Gosei are feeling that, and we need to do something to stop that bleeding. This resolution, however imperfect it may be, is a step in the right direction, and I think it’s time we took that first step.”

After hours of conversation, the final, overwhelming vote was in favor of the resolution, which may have marked a generational changing of the guard for JACL’s now-diminished national membership.

Said Ina at the conclusion of the panel discussion: “My hope is that when our community can unify and move forward, there will be a powerful healing, a healing that will give us a united voice that will unite us today. I hope this can happen before all of us who were in camp are gone. I see the possibility that this can be a historic moment for all of us to really heal from the injustice of being incarcerated.”

JACL also released a statement that expressed the need for the organization to continue its work toward further reconciliation between JACL and those incarcerated at Tule Lake, as well as the need for improved education on the Tule Lake experience.

“It is imperative that we bring our community together in order to build power to face the civil rights challenges of today,” JACL National President Jeffrey Moy said. “The diverse experiences of Japanese Americans should be celebrated as a strength, not as something divisive. JACL has long embraced the incredible legacy of our Japanese American veterans and their valor in fighting for a country that did not fully see them as American. The passage of this resolution signals our intention to be more inclusive lf all of our community, particularly those who resisted the incarceration.”

In other business, the National Council also voted to approve the following:

During the National Board session on July 31, a proposed recommendation was made by the Education Committee’s Greg Marutani to reprint 2,000 copies of the Power of Words handbook and consider reprinting 500 additional copies of a condensed version of the Curriculum Guide, which would be amended to add additional content related to the outcome of R-3.

In his membership report, VP Haruka Roudebush continued his push to increase JACL membership to 10,000, stating that as of July, there are currently 8,559 in the organization.

[Editor’s note: Click here to read the amended and approved text of Resolution 3.]