The Tanforan Assembly Center Memorial Committee holds a ribbon-cutting ceremony, culminating a decade of work to honor those once imprisoned at the San Bruno site. 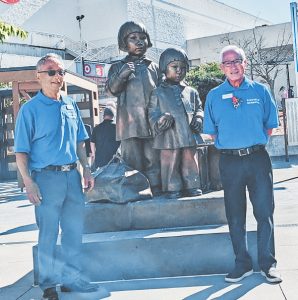 The $1.4 million memorial, which took more than 10 years to complete on land that was donated by BART (Bay Area Rapid Transit), the city’s regional transportation system, is situated just outside the San Bruno BART station and the Shops at Tanforan.

Tanforan survivors, who all wore red carnations, were represented by Mary Ann Furuichi, who was 4 years old when she and her family went to Tanforan following the issuance of Executive Order 9066.

According to the TACMC, “During WWII, the U.S. Army converted what was then the Tanforan Racetrack into one of 17 temporary detention centers at which persons of Japanese ancestry were incarcerated while more permanent detention centers in the inland United States were being built.”

The Tanforan Assembly Center, over the course of six months, held nearly 8,000 people of Japanese descent.

The Tanforan Memorial stands as a permanent monument to honor all those who were forcibly imprisoned at Tanforan and “to ensure that the injustice they suffered is not forgotten.”

It features a replica horse stall as well as a statue sculpted by Sandra Shaw of the two Mochida sisters, who were photographed by Dorothea Lange in 1942 as they waited to be transported to Tanforan from their home in Hayward, Calif.

The TACMC, which was formed in 2012, is comprised of former Tanforan detainees, in addition to several Bay Area Japanese American activists.

Chairman Doug Yamamoto said that “he was overcome with emotion” when he addressed the crowd with his closing remarks. “After looking at the finished memorial, I felt that the effort we put in was well worth the time in honoring the 8,000 souls that lost everything when they were forced to come here in 1942.” 