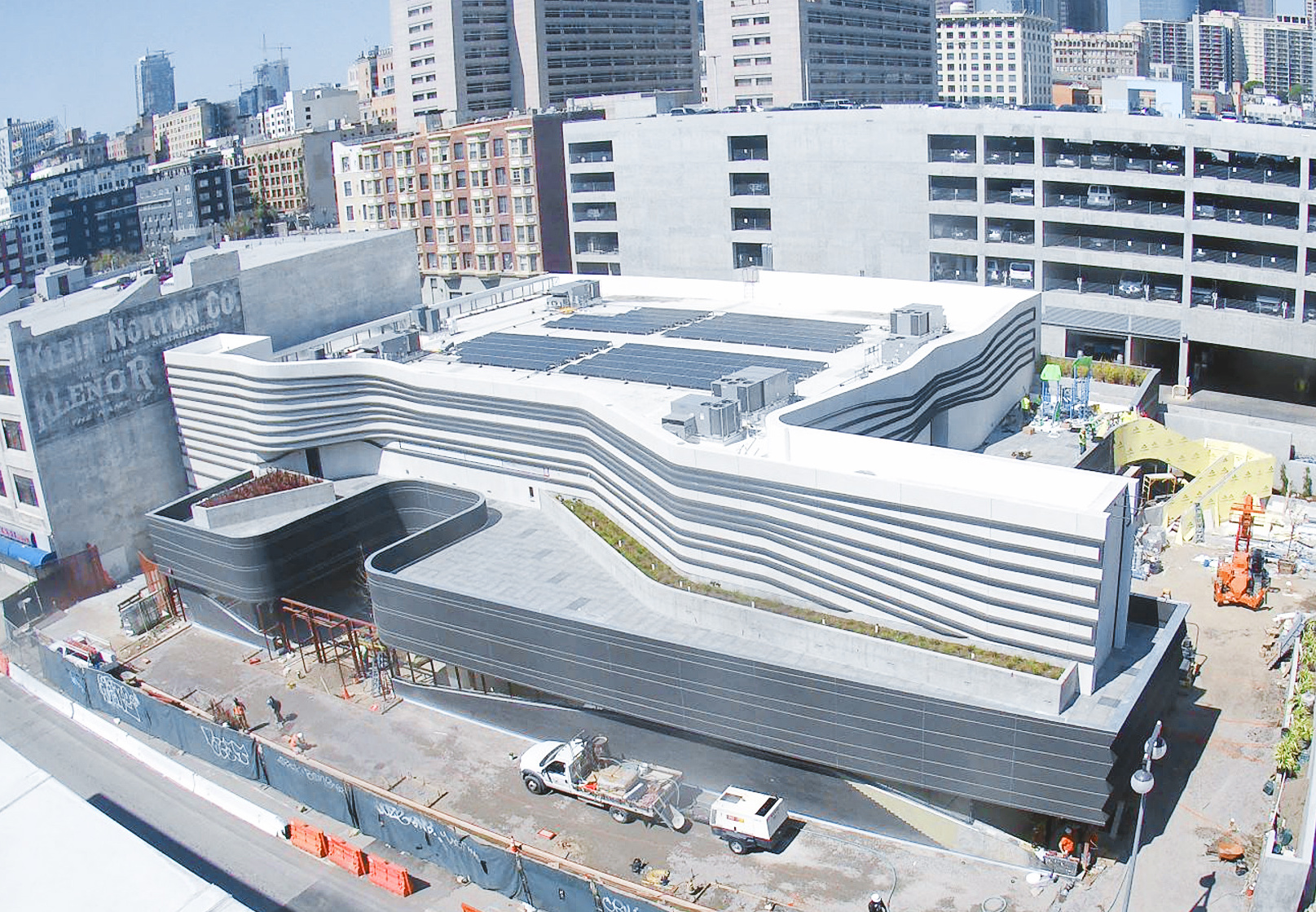 The grand opening of the long-gestating Terasaki Budokan in Little Tokyo was scheduled for June — until the COVID-19 crisis upended those plans. But construction continued and a less-grand opening could still happen soon. (Photo: Little Tokyo Service Center)

COVID-19 delays the grand opening, but a limited opening is a possibility. 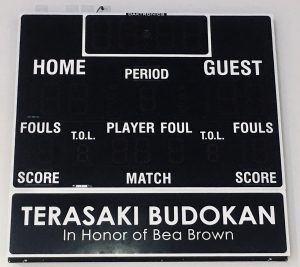 In the near future, this scoreboard will keep track of basketball games at the Terasaki Budokan. (Photo: George Toshio Johnston)

Although it definitely applies, whoever came up with the saying, “Good things come to those who wait,” did not have the long-gestating Terasaki Budokan in mind.

It’s also safe to say no one involved with its planning ever anticipated that the grand opening for Little Tokyo’s new recreation center and community space, which had been set for June, would become yet another victim of SARS-CoV-2.

However, because the “lockdown” imposed on nonessential businesses and services to slow the spread of the deadly virus did not apply to the Terasaki Budokan — a partnership between the City of Los Angeles and the nonprofit LTSC Community Development Corp. — construction has continued these past few months, with the only remaining work needing completion being getting the details right.

According to Mike Murase, the LTSC’s director of Service Programs and Budokan Capital Campaign director, everything should be completed by mid-July, and once a certificate of occupancy is issued, “we could start having activities here” — but on a limited basis.

“The grand opening that we were hoping to have in June or July we postponed indefinitely,” said Murase. “We have not rescheduled it yet, but we are probably looking at early next year to have a grand opening ceremony. But that doesn’t mean that we couldn’t be using it in a limited way as soon as it’s available to us.”

For Ryan Lee, that is OK.

“I think that’s a sacrifice we’ll be happy to make,” said the Little Tokyo Service Center’s Lee, director of the Terasaki Budokan, which is located on Los Angeles Street between Second and Third Streets, steps away from the Little Tokyo Branch of the Los Angeles Public Library. 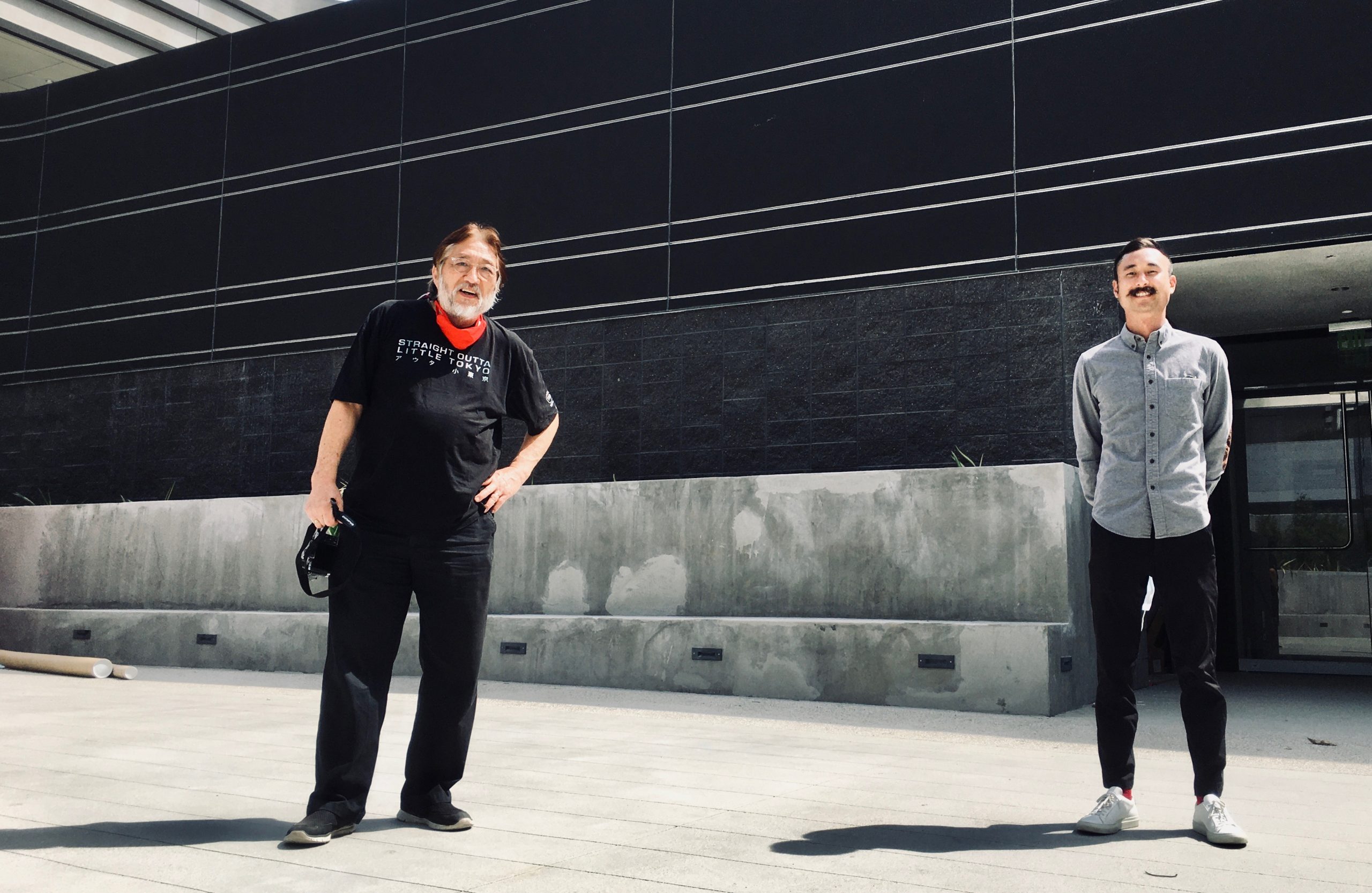 In other words, what’s a few more weeks of delay when you consider that the idea of a Little Tokyo-based multipurpose center for basketball, volleyball and traditional Japanese martial arts, meetings and a community hub goes back to 1994 for LTSC — and by the reckoning of some, even longer?

“There could be an argument made that there was a need for a budōkan, a Little Tokyo rec center back in the ’40s and the postwar years,” said Lee, who grew up in Pasadena, Calif., and whose grandparents, Alice and Robert Kikawa, were founding members of the Pasadena Bruins organization. “In the late 1940s when Japanese Americans were reassimilating back into American culture, it’s not like everybody was here with open arms ready to embrace the Japanese Americans. So, those sports leagues became kind of a bonding agent.” 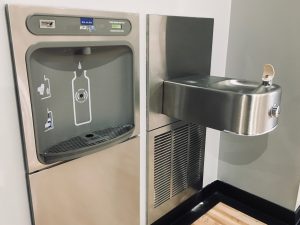 Now, the dream of a Little Tokyo-based rec center is inevitable. Under the guidance of the Department of Public Health and other government officials, some limited activities may be allowed when the facility has its soft opening, Murase hopes.

“We will not be able to have such things as contact sports — basketball volleyball, judo. We could have karate, the kata portion of it anyway [with masks], where they could be distanced and still train,” Murase said.

Despite the Japanese meanings of budō (martial way) and kan (building or meeting hall), it’s obvious that because of the primacy of basketball within Southern California’s Japanese American communities compared to nearly any other community or cultural activity (including judo, kendo, karate, et al, as well as volleyball), the heart of the 51,000-square-foot Terasaki Budokan will be a main floor large enough for an Olympic-sized basketball court or, when partitioned, space for two side-by-side basketball courts, with removable bleachers for sports fans.

The facility, designed to meet LEED (Leadership in Energy and Environmental Design) standards including a system for reusing water, will also have underground parking, a meeting room, a second-story terrace and an outdoor events area with a stage, not to mention advanced video recording capabilities to use to improve training.

“They’ve done a really fantastic job of keeping us apprised as to what’s going on with the construction.

Every day, there’s something new that comes up with a project this big, and it’s been really great to work with them.”

Yes, by any measure, the Terasaki Budokan is a big deal.

On the left, Mike Murase of LTSC chats with Pacific Citizen’s Susan Yokoyama on the main floor of the Terasaki Budokan in early March. On the right is the same main floor in July, showing the progress made as the facility awaits a greenlight to open in a limited capacity. (Photos: George Toshio Johnston)

According to Murase, a tipping point in turning the long-held dream into a reality came in May 2017. That was when the Terasaki Family Foundation made a $3.5 million donation toward the Budokan of Los Angeles and gave it a new official name: the Paul I. Terasaki Budokan. (Paul Terasaki invented tissue-typing technology that made organ transplants possible — and himself a multimillionaire and philanthropist.)

“Even fundraising professionals gave us the advice and opinion that we would not be able to raise the funds to make this happen,” Murase reflected. “We went against the professional advice and said, ‘We’re going to do it.’”

Murase said the donation by the Terasaki Family Foundation was important not just for the amount of money but also for the credence it conferred.

“We’ve had a number of other challenges throughout this process, and one by one, we were able to overcome them,” Murase added.

One unforeseen setback that hit the project particularly hard was the Sept. 4, 2019, death of 49-year-old LTSC Executive Director Dean Matsubayashi.

“He played a critical role, particularly in identifying resources, and I think he was the one who best understood how government funding and foundation funding worked,” Murase said. 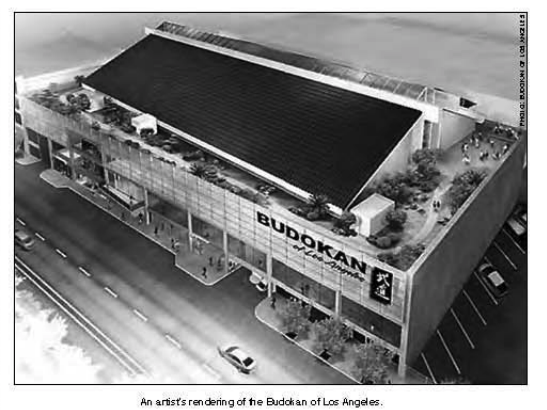 Artist’s rendition of the Little Tokyo Budokan that originally appeared in a 2013 issue of Pacific Citizen.

In an article from the Sept. 6-19, 2013, Pacific Citizen, Matsubayashi said, “I would like to thank the City of Los Angeles for their partnership with LTSC on the Budokan project and for their recognition on the importance of expanding recreational opportunities in the downtown area for a broad range of potential users, especially for many within the area who don’t have access to affordable recreational opportunities.”

Murase said another turning point for the project occurred with the August 2017 groundbreaking.

“That was a point when the community looked at the Budokan project with new eyes because they saw something actually happening. It became more real,” he said.

It marked yet another obstacle overcome, namely, finding a site in downtown Los Angeles with the necessary size for such a project.

Murase noted that more than 25 sites in and near Little Tokyo were considered. Among those sites was the area known as First Street North.

“There was community opposition by some people, although a number of people wanted to see it built there,” he said. “The challenge of finding a suitable site within Little Tokyo was very difficult.” 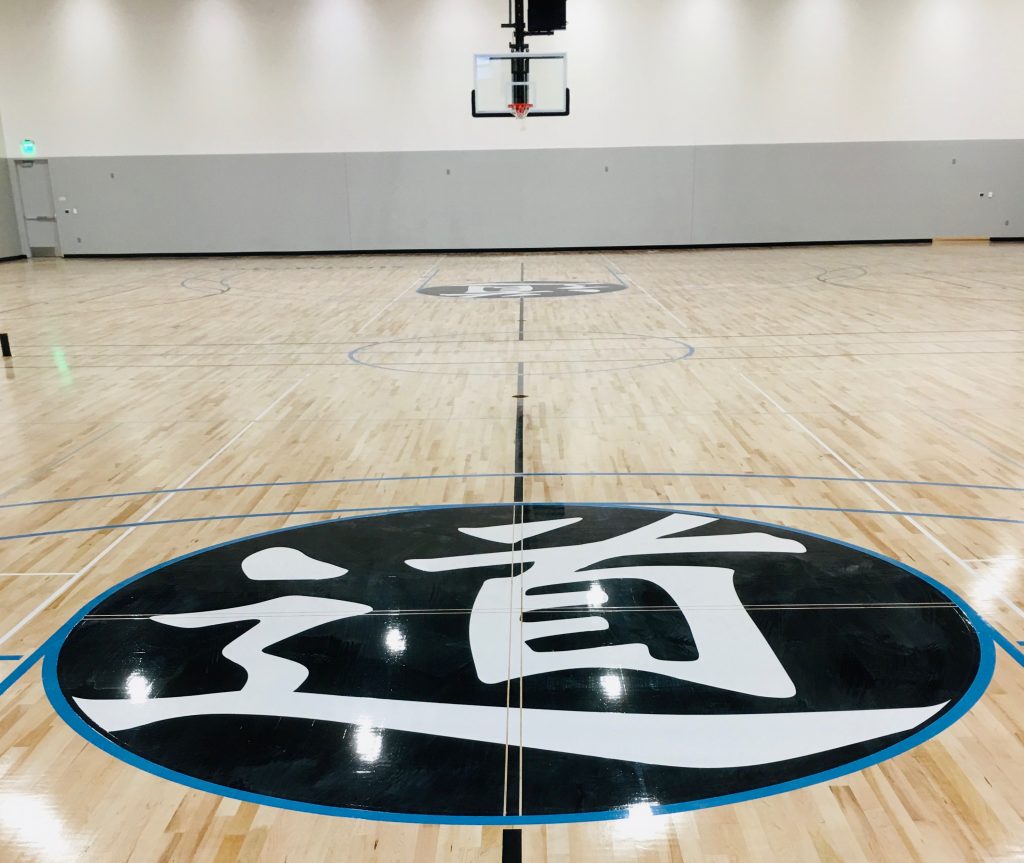 The kanji for “dō” or “michi” (path or road) is prominently displayed on the wood floor of the Terasaki Budokan. (Photo: George Toshio Johnston)

Another key component in the path to the creation of the Budokan cited by Murase was community outreach.

“We went to a lot of the basketball organizations, the martial arts organizations, we met with individuals and families who had resources and ties to Little Tokyo and were able to, one by one, get people’s support, and now we’re at a point where, in the last year as we publicized images of the building going up, we dispelled the notions of the naysayers who thought it could never happen,” he said.

Asked whether those meetings showed a spirit of cooperation or if it was like herding cats, Murase said it was both — but he added, “We are very thankful for the community support that we got over the years. There were people who stuck with us through thick and thin, people who came on board at a much later time but supported us in very significant ways, and so we consider this a project as something that was done by the community.” 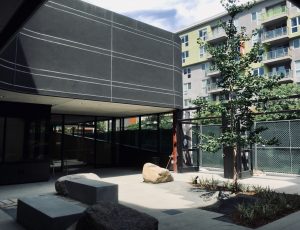 For Murase, the Terasaki Budokan is for the up-and-coming generation, whether from Orange County, the San Fernando or San Gabriel Valleys, the South Bay or the Westside — and he wants it to be a special experience.

“They’re not walking into a high school gym or a rec center gym anywhere. To come to Little Tokyo to play basketball in that special place and then walk out into the community, go out to the restaurants, go to JANM and the JACCC and make some memories with their friends and their family as they grow up — that’s what we want to see,” Murase said.

“That kid who’s in the third grade now or in the eighth grade now, when they graduate from college and become adults, they’ll have a memory of Little Tokyo and a memory of an experience they shared with people they liked, their teammates, their family,” he continued. “That’s got to be the special thing. That’s what we want to see. We want generations of JA kids and other kids to experience that feeling.” 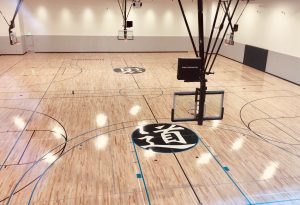 From the outside looking in, onto the main floor of the Terasaki Budokan. (Photo: George Toshio Johnston)

But because of the coronavirus, Murase said, “The grand opening that we were hoping to have in June or July we postponed indefinitely. We have not rescheduled it yet, but we are probably looking at early next year to have a grand opening ceremony.”

Until that day comes, Murase says the thinking is to first do “a much more modest virtual grand opening so that people can at least see the facility. It will be like a video tour of the facility. We have a lot of other preparations that we want to be doing, including reaching out to the community to reconfirm their interest in using the space.”

Murase also noted that the pandemic has given him a different perspective on how the grand opening for the Terasaki Budokan might be approached.

“What we’re going through now changed a lot of us and probably changed the world. So, when we get through this, we’re not going back to resume whatever was going on. We’ll be doing a lot of the same things but with new eyes, new ideas, and I think even for the grand opening, we had planned a sort of an extravaganza that focused on the Budokan’s accomplishments.

“I’m personally rethinking that,” he continued. “Maybe when the facility can be opened to the public, we should have a community gathering to celebrate the fact that all of us got through this and not so much a focus on the grand opening of a building, but celebrating a community and its people, resilience, sticking together and overcoming another hardship that Little Tokyo has gone through.”

For Lee, he boiled it down thusly: “We’re hoping to really be a home court for all. That’s our slogan.”