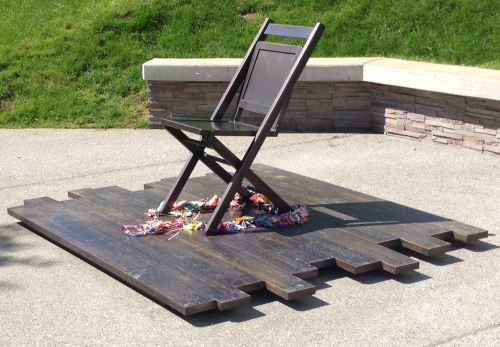 The Empty Chair Memorial is dedicated to honor the Juneau Japanese who were removed during World War II. Photo courtesy of Empty Chair Committee

An empty bronze folding chair was unveiled to remember and honor 53 Juneau Japanese incarcerated at Minidoka.

Residents of Juneau, Alaska, past and present gathered at on July 12 in Capital Park to witness the unveiling of the Empty Chair Memorial dedicated to honor the Juneau Japanese who were removed during World War II.

More than 3,000 paper cranes were folded locally or sent from across the country and Canada, covering the memorial in celebration.

The Empty Chair Committee established the memorial to honor the city’s residents of Japanese descent and recognize community members who helped the returning families restart their lives after the war. As a project sponsored by members of the Juneau High School Class of 1958 and the local Juneau community, the memorial took shape as a bronze folding chair.

As written on the Empty Chair Committee’s program website, “The Empty Chair Memorial represents the void the people of Juneau felt for their friends and neighbors impacted by this injustice.” Members hope that the memorial will remind future generations of the lessons learned from WWII.

Marie Darlin, who witnessed the graduation, remembers the event as “one of the saddest things that ever happened in Juneau.”

Empty Chair Committee organizers Mary Tanaka Abo and Alice Tanaka Hikido are Tanaka’s daughters, and they hoped to respect and remember not only their father but also the community at large, influencing the design of the chair.

The bronze folding chair sits one and a half times the normal scale of the original chair from the 1942 graduation ceremony, giving “it greater presence and stature and invites interaction from visitors to the park,” explains memorial artist and sculpture Peter Reiquam, who is from Seattle, Wash.

At the base of the sculpture are simulated floorboards, similar to the gymnasium floor where the graduation ceremony took place. Etched onto the surface of the floor boards is a narrative describing the event and 53 names of Juneau residents who were incarcerated at Minidoka Camp.

The Akagi, Fukuyama, Kanazawa, Kito, Komatsubara, Taguchi and Tanaka families are among those etched onto the floorboards.

“The story is a moving one, both for the families who were affected and for the community whose citizens were taken from their midst,” said Reiquam. “Equally moving is the story of these exiled families’ return and the way that the community welcomed them home and supported their efforts to pick up where their lives had left.”

Visitors to the memorial are invited to sit on the bronze chair, giving the viewer an opportunity to reflect on the history and the people the sculpture is intended to memorialize.