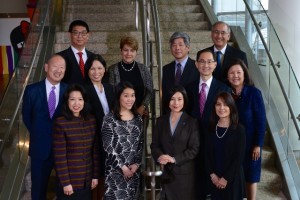 Ten Japanese American leaders, including JACL’s Priscilla Ouchida, will visit Tokyo and Hiroshima as part of a weeklong tour.

WASHINGTON, D.C. — Ten Japanese
American leaders will travel to Japan from March 6-14 as members of the 2015 Japanese American Leadership Delegation program, a weeklong trip dedicated to building people-to-people connections with Japanese leaders. Now in its 15th year, the JALD provides opportunities for Japanese Americans to establish a meaningful role in strengthening U.S.-Japan relations across all sectors of society.

The delegates will visit Hiroshima prefecture, where they will participate in a panel discussion sponsored by the Japan Foundation Center for Global Partnership and the U.S.-Japan Council. (USJC). They will then visit Tokyo, where past delegations have typically met with the prime minister, foreign minister and top business executives.

The program is sponsored by the Ministry of Foreign Affairs of Japan and organized by the USJC.

This year’s delegates are:

The JALD began in 2000, and to date, 166 delegates have participated in the program.