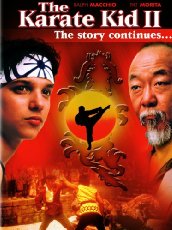 Three decades on, the film’s co-stars ‘wax on’ nostalgically over their experiences.

It certainly was a memorable year, as 1986 was the year of the Chernobyl nuclear plant and Space Shuttle Challenger disasters; President Reagan and the U.S.S.R.’s Communist Party General Secretary Mikhail Gorbachev’s summit in Reykjavik, Iceland; Mike Tyson at 21 becoming the youngest man ever to win the heavyweight boxing championship; Los Angeles Dodger Fernando Valenzuela pitching 20 wins; Ferdinand and Imelda Marcos fleeing the Philippines; the national debut of a daytime talk show featuring Oprah Winfrey; the launch of the Fox TV network; and in theaters “Gung Ho” and “Big Trouble in Little China,” a couple of movies threaded with Asian American storylines.

Another movie with Asian American subject matter from 1986 was the sequel to the charming “Karate Kid” movie from two years before. Ralph Macchio and the late Pat Morita reprised their roles as student Daniel LaRusso and karate teacher Mr. Miyagi, respectively.

In his review of “The Karate Kid: Part II,” the Pacific Citizen’s then-assistant editor J.K. Yamamoto wrote in the Aug. 8, 1986, issue that the movie “ … may be just lightweight summer entertainment, but it is such a pleasant change of pace to hear an audience cheering an Asian hero that it is worth seeing on that basis alone.”

That hero was, of course, Mr. Miyagi, the humble handyman who also was a Medal of Honor-winning member of the 442nd Regimental Combat Team and karate sensei who served as a surrogate father to his student, Daniel-san.

Greenlighted after the unexpected success of its predecessor, “The Karate Kid: Part II” would best the original in boxoffice receipts, with domestic grosses of more than $115 million in its theatrical run, making it the No. 4 highest-grossing movie of the year.

Thanks to a change in venue from Reseda, Calif., to Miyagi’s childhood home, Japan’s Okinawa prefecture — with Hawaii filling in for the Ryukyu island — the movie was also significant for launching the careers of a pair of Japanese American actors who are still active in the business to this day: Tamlyn Tomita and Yuji Okumoto.

More than 30 years later, the roles they both played in the hugely successful movie still loom large in their respective lives and careers. 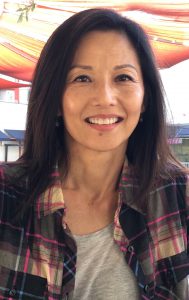 For Tomita, her “KKII” role as Kumiko — the romantic interest of young LaRusso — was her Hollywood debut. For Okumoto, who played the movie’s bad boy and LaRusso’s foil, Chozen, it was his biggest screen credit up to that point in his still-nascent career. (His credits prior “KKII” included “Better Off Dead …” and “Aloha Summer,” which was made before “KKII” but released afterward.)

Tomita, who was coming off serving as the 1984 Nisei Week festival’s queen, remembers being approached by a casting director about auditioning for the role of Kumiko, for which she was one among many who tried out. “I keep running into, to this day, other actresses who also went up for the role,” Tomita said.

It truly was a life-changing opportunity, and Tomita realizes how fortunate she was. Despite the poise required to be a Nisei Week queen candidate, regarding the filmmaking process, Tomita said, “I did not know anything when I stepped on set about how to act on film. There was nothing that I knew. What do they say, ill-equipped? I came nonequipped!”

Fortunately for Tomita, she got the nod, and she is still in show business, having recently finished working on “The Ningyo,” set for a 2017 release.

But had she not participated in Nisei Week and become that year’s queen, which raised her profile enough to be approached to audition, Tomita says she likely would now be teaching middle school students at a school near her San Fernando Valley home and taking care of her mother. 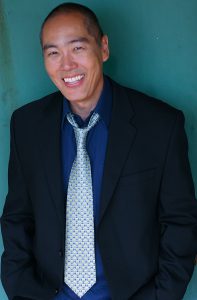 Okumoto, meantime, is also still involved in show business. His list of credits on his IMDb.com page over the subsequent years include appearing in dozens of TV shows and movies (2010’s “Inception” is one of his bigger recent credits), including voice-over work in animation ­— but not from Hollywood.

The Los Angeles native currently resides in Seattle, where he is raising three daughters with his wife, while also running their restaurant, Kona Kitchen.

Okumoto says he still gets recognized for “KKII” by people who saw the movie 30 years ago — but there is also a younger demo (that he noted are people who are now in their 30s) for his role in the 1999 Disney Channel telefilm “Johnny Tsunami,” which he notes was, at the time, that network’s biggest hit.

Tomita credits “Uncle Pat” and “Uncle Danny” for helping her with her big-screen debut, along with Nobu McCarthy, Joey Miyashima and Marc Hayashi, as well as Macchio and Okumoto, for helping her with the process, and says she tries to carry on that magnanimous attitude toward young acting talent whenever she can.

As for Okumoto, he remembers coming to the set and meeting Morita. “What a joy, what a wonderful man he was. Very supportive, very helpful,” he recalled. “When you have an opportunity to work with really wonderful actors like Pat, you listen.”

Okumoto also remembers while they were shooting “KKII” how Morita and Kamekona invited him to come out to Waikiki one night — and they stayed up until 4 a.m.

“I just had to laugh about it. They just loved to go hang out,” he said. Okumoto would later work with Morita on two other movie projects, 2006’s “Only the Brave” and 2000’s “I’ll Remember April.”

While Tomita is happy to continue to act for as long as possible, she’s doesn’t feel she has the right aptitude to try another part of show business: producing. Okumoto, however, has embraced it. “I enjoy the process of putting pieces together,” he said.

Tomita and Okumoto remain friends and do still cross paths

professionally, with both of them having appeared in the 2016 short movie “Seppuku.”

But three decades on, both actors will forever be tethered professionally and in the public eye thanks to the big splash they each made in “The Karate Kid: Part II.”