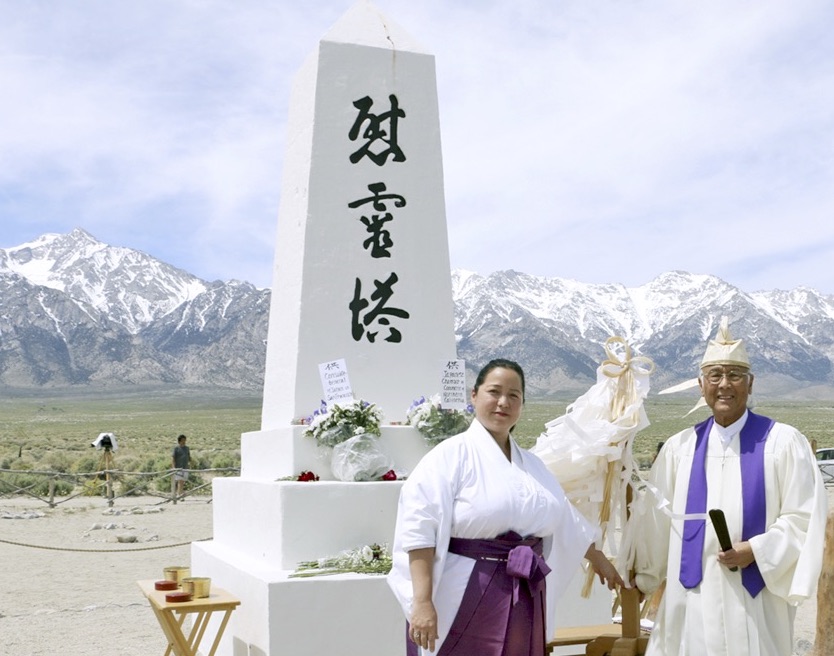 The Manzanar Pilgrimage: A Sacred Event

Michelle Miyatake Kuruma assists Shinto priest Rev. Alfred Tsuyuki during the interfaith ceremony at the 50th Annual Manzanar Pilgrimmage, held April 27. Kuruma is a granddaughter of photographer Toyo Miyatake, who was incarcerated along with his family at Manzanar during WWII. (Photo: Athena Asklipiadis)

Commemorating its 50th anniversary, people from all walks of life gather to honor the past and continue the journey of social justice in the present.

A crowd estimated at around 2,000 journeyed to the 50th Annual Manzanar Pilgrimage at the Manzanar National Historic Site on April 27. Attendees listened to speakers from the Lone Pine Paiute-Shoshone Reservation and the National Park Service, politicians, community activists and organizers and Tomochika Uyama, the Japanese consul general in San Francisco.

This year’s anniversary event celebrated the 50 years since the very first Manzanar Pilgrimage in December 1969. It was then that a small group of activists began organizing an effort that — 50 years later — would change how history viewed the social injustice that resulted in the incarceration of approximately 120,000 people of Japanese ancestry, most of whom lived on the West Coast and were American citizens.

The Civil Rights Movement of the 1960s would bring an awareness of the injustice that occurred at the American concentration camps and rewrite a history that had been largely ignored until the Manzanar Committee was formed in 1970 by Co-Chairs Sue Kunitomi Embrey and Warren Furutani. The committee had a two-fold focus on education and a goal to establish Manzanar as a California State Historical Landmark. It has enjoyed remarkable success. 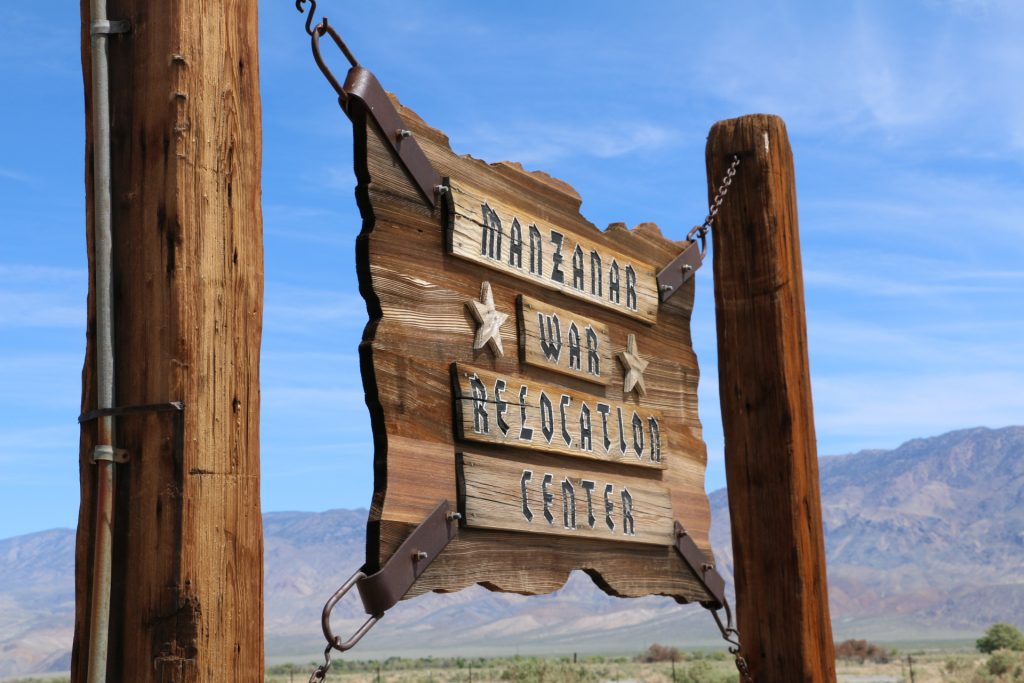 The Manzanar Pilgrimage is a blend of politics, religion, goodwill and fellowship. It brings together people of all walks of life and backgrounds to honor and remember the past, address the injustices of the present and look toward a future that includes justice and redress for all groups suffering social injustices.

The hour-and-a-half program was held outside the camp cemetery on an unremittingly warm day under a mostly cloudless sky, with the majestic snow-capped Sierra Nevada mountains serving as a backdrop.

It began with an energetic performance by the Kyodo Taiko drummers from the University of California, Los Angeles.

Furutani served as co-master of ceremony this year along with activist/artist/teacher traci kato-kiriyama. Furutani, a former California state assemblyman, told the gathering that he and the late-Victor Shibata, who he characterized jokingly as an “original gangster,” were inspired by the Farm Workers March in Sacramento and the Poor Peoples March in Washington, D.C., in the 1960s to create awareness of injustices.

Furutani noted that many family members incarcerated in the 10 American concentration camps were largely silent about them, but the topic would quietly come up at family gatherings.

It was, as he described it, “a shared touchstone experience” that brought them together. Along with other young activists, he wanted to change that, and the Manzanar Pilgrimage was a path toward that goal.

In 1969, the site was in very poor condition, with very little left onsite other than the old gymnasium and the cemetery monument, which Furutani referred to as a “sacred place.” Ever since the camp closed in 1944, Buddhist priests and Christian ministers have been visiting the cemetery to honor the bodies that remain buried there.

(In the late 1960s, Furutani joined the staff of the Japanese American Citizens League as its national community involvement coordinator and also wrote a column for the Pacific Citizen newspaper. He later resigned in 1972 along with other young JACL activists after protesting that the recent appointment of a new JACL national director only continued the more conservative status quo in the area of civil rights injustices.)

During his address to the gathered crowd at the pilgrimage, Japanese Consul General Tomochika Uyama from the Consulate of Japan in San Francisco spoke to the audience, in both English and Japanese, and offered his greetings and appreciation to be able to travel to the Manzanar Pilgrimage along with members of the Japanese Chamber of Commerce of Northern California.

Uyama’s address marked the healing that has taken place between Japanese Americans and ancestral Japan through the years.

On behalf of the Japanese Government, Uyama expressed regret for the suffering that World War II placed on those of Japanese ancestry in the United States. Over the past year, since his appointment, he has come to learn of the suffering endured at the camps. He also added that he has been impressed that, even with the hardships, there were astounding accomplishments such as growing much of the food used to feed those in the camps and the creation of beautiful landscaped gardens.

After Uyama’s remarks, kato-kiriyama remarked on how “beautiful it was to hear Japanese spoken here (at Manzanar)!” She said the incarceration at the camp had caused many in her family great pain, so much so that many of them completely rejected ever speaking Japanese again or learning of Japanese culture.

The Manzanar Committee’s Bruce Embrey, son of Sue Kunitomi Embrey, one of the original Pilgrimage organizers, echoed Furutani’s comments that “for decades, no one spoke of the camp experience.” They first began with “talking and sharing the story, which led to healing within the Japanese American community.”

Later would come the “Redress Movement,” accompanied by an official apology from the U.S. government and payment of $20,000 to survivors of the camps. The Civil Liberties Act of 1988 acknowledged that the injustices of the camps were driven by “race prejudice, war hysteria and a failure of political leadership.”

Because of their own successes, Embry said that the Manzanar Committee is committed to “calling out all injustice,” which is why they are fighting alongside and supporting Muslims to counter the widespread legal and political attacks that are targeting them by “fabricated hysteria.”

The committee is also involved in the issue of immigration from Latin America, which has resulted in children being separated from their parents at the U.S. border. And the committee supports Native Americans in their fight to preserve their land, protect sacred places and have access to natural resources, as well as African-Americans harmed by racial profiling.

“Manzanar should become a monument to our core values of democracy and civil rights,” Embrey said. “Our message is simple: Speak out, demand equal justice under the law for everyone, no matter who they are or where they come from.”

Following Embrey’s remarks, Nihad Awad, CEO and founder of the Council on American-Islamic Relations (CAIR), spoke. He stressed the “need for vigilance in the face of discrimination.” His comment that “an attack on one community is an attack on all of us” drew loud, enthusiastic applause from the gathered crowd.

Jim Matsuoka was awarded the 2019 Sue Kunitomi Embry Award. He was only 7 years old when he was sent to Manzanar during WWII. He was one of the original group of activists that made the first trip to the Manzanar cemetery in 1969.

“We came to remember what our people had suffered — and not forget,” Matsuoka poignantly said. He also said that people often ask him about the cemetery.

In 1942 at the age of 23, her father refused an order to leave his home and job and go to the wartime government’s incarceration camps for Japanese Americans.

As a result, Fred Korematsu was arrested and convicted of defying the U.S. government’s orders. In the infamous 1944 Korematsu v. U.S. decision, the Supreme Court held that the internment was justified out of “military necessity.”

Many decades later, that rationale was overturned by the 2018 Supreme Court, ironically as the result of a decision in favor of President Donald Trump’s travel ban, which places varying levels of restrictions on certain foreign nationals from Chad, Iran, Libya, North Korea, Somalia, Syria, Venezuela and Yemen from entering the U.S.

While covering this story, I met the James Toma family from West Covina, Calif. This family is an example of how the U.S. is increasingly becoming ever more diverse, as were many others attending the event.

James Toma was originally born in Okinawa, Japan, and brought to the U.S. at the age of two months. He said, “My parents met in Japan, fell in love and came to live in Los Angeles.” Toma’s father had recently left the Air Force; his mother was from Japan.

Toma is a former city councilman in West Covina, and he currently works as a California State Deputy Attorney General. He and his wife, Minerva Avila, along with their two children, Cruz, age 11, and Paz, age 8, came to this year’s Manzanar Pilgrimage to learn more about the history of the Japanese incarceration during WWII because it is an important part of their family’s heritage. Their family is a blend of Japanese and Latino ancestry.

The Toma’s wants their children to be proud of their heritage. They are active members of the East San Gabriel Valley Japanese Community Center in West Covina, and the family can frequently be found there or in Little Tokyo.

His daughter, Paz, is in a Spanish-language immersion program and enjoys traditional Mexican folk dance. Both children were angry about the injustice committed against those of Japanese ancestry during WWII. Paz Toma couldn’t believe the hardships that people were forced to live in while at Manzanar.

At the end of the “official” program, everyone relocated to the cemetery where they gathered around the “Soul Consoling Tower.” Surrounded by flowers and sounds of prayers and chants, the interfaith closing ceremony was assisted by Michelle Miyatake Kuruma, the granddaughter of Manzanar photographer Toyo Miyatake.

It was another year and another reminder that Manzanar is truly “a sacred place.”

Banners for the 10 American concentration camps created at the beginning of World War II.