The Nakamura Family of Artists

Japanese American artistJoel Nakamura, the youngest of three creative siblings, will have his folk art-inspired murals showcased at the Feb. 12 grand opening of a new education center at the Denver Museum of Nature and Science.

Sitting in her Whittier, Calif., parlor decorated with her family’s paintings and sculptures, Grace Nakamura proudly says that she has been practicing art ever since she was old enough to hold a pencil. 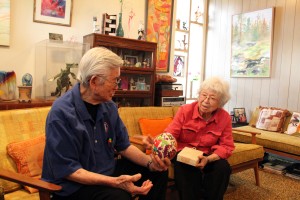 Yosh and Grace Nakamura have their family’s art on permanent display in their sitting room in Whittier, Calif. Photo by Eric Swanson

The 86-year-old Japanese American recalls during World War II when her family of seven was abruptly relocated from their Southern California home and unjustly interned at Manzanar. The family was among the 120,000 persons of Japanese ancestry who were incarcerated following the war hysteria and racism that erupted in the aftermath of the Pearl Harbor attack in 1941.

As children, Grace and her late brother, Larry Shinoda, an automotive designer who was credited with the 1968 Corvette Stingray, loved to draw on cutout sides of paper sacks that their mother supplied for them.

“My mother was a very resourceful person,” Grace said. “She was a widow and didn’t have a lot of money. In those days, they used to have flyers they used to pass around in people’s mailboxes. She’d save the side that was good, the blank side, and there was a little box of pencil stubs. That was always there for us. It was right near the radio.” 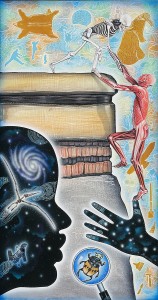 Joel Nakamura was commissioned by the Denver Museum of Nature and Science to paint three murals pictured here for its new education building.

After the war, with the help of the Quakers’ organization, American Friends Service, Grace was able to get a scholarship to attend the University of Redlands to study sociology and education. She went on to teach in the Pasadena School District and receive two master’s degrees. While in her early 20s, Grace would meet Yoshio “Yosh” Nakamura, now 88, who also shared her love of fine arts.

“We were at the Union Church of Los Angeles. The young people decided they’d like to go to the beach after the service. So, they all got in the cars. This one woman didn’t have a ride, and I happened to have –– as a veteran I was able to go to their war surplus stores and they had a Ford that had a Mercury engine that was for sale,” said Yosh. “She needed a ride. I took her to the beach. She was at the university, and I was about to go to USC.”

Yosh, a decorated war veteran of the famed all-Japanese 442nd Regimental Combat Team, also grew up in Southern California. After the war, Yosh, who was first drawn to watercolors, was able to briefly hone his art skills in Florence, Italy. He went on to receive his bachelor’s and master’s degree in fine arts from the University of Southern California. Later, Yosh was one of the first faculty members to ink a contract with Rio Hondo Community College in Whittier, Calif., and then become the first chair of the fine arts department.

The husband and wife will celebrate 64 years of marriage this year. The three Nakamura children also inherited their parents’ love of doing art.

The youngest of the three children, 54-year-old Joel, is a professional artist. Luckily for Joel, his mother is also a natural public relations manager, as she promotes his work pro bono.

“Here my mom is calling the museum, and I’ll tell her, ‘Please don’t do that.’ But she does it anyway,” said Joel, with a laugh, from his art studio in New Mexico. “I get the PR whether I want it or not. This is living testament that I’m talking to you. My mom called up.” 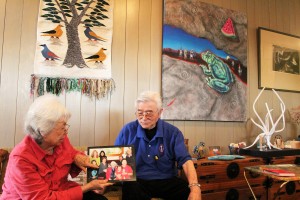 Grace and Yosh Nakamura will celebrate their 64th wedding anniversary this year. Photo by Eric Swanson

Three of Joel’s murals that depict the museum’s collections were unveiled on Feb. 12 at the grand opening of the $56.5 million Morgridge Family Exploration Center at the Denver Museum of Nature and Science. The new five-level, 126,000-square-foot education wing was funded thanks to $30 million from the city’s Better Denver Bond program and $26.5 million from other museum fundraising. 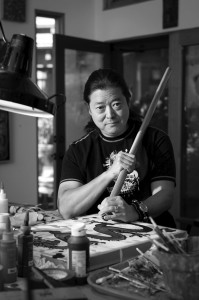 “We really wanted to find just the right artist who could interpret the museum’s fabulous collections in a way that would connect to kids,” said Lisa McGuire, the museum’s exhibits graphic designer. “Exhibits project manager Bryce Snellgrove and I had both worked with Santa Fe artist Joel Nakamura before, so we thought he’d be a perfect match for this vision. As luck would have it, Joel was also excited to work with the museum again. It was apparent to Bryce and to me that with Joel’s youthful enthusiasm and fascination with the collections, something wonderful was in store. And we were not disappointed.”

An award-winning illustrator, fine artist and third-degree Aikido black belt, Joel lives in Santa Fe, N.M., and has been an artist for more than 30 years. Grace called the Pacific Citizen earlier this month to promote Joel’s murals at the Denver Museum of Nature and Science.

“She scolded their PR person. And they actually didn’t know that there was artwork going to be in this new wing. They were actually grateful that they were informed about something that they should have known about,” Joel said. “To her, I’m still a 10-year-old.”

The mother of three, however, is equally proud of all her children’s careers and creative endeavors. Carrying on the resourceful art tradition that began with her mother, Grace would provide big sheets of X-ray paper that she acquired from her radiologist uncle for her children to do art projects on when they were growing up. The eldest Nakamura child, Linda, is now an immigration attorney who also does photography. The middle sibling, Daniel, is a teacher who is also a skilled origami artist.

Together, the Nakamura family has had seven art shows. They will showcase their works as a family at the 54th Hillcrest Festival of Fine Arts in La Habra Heights, Calif., from Feb. 21-23.

From her family home where the Nakamura art is on permanent display, Grace laughs saying, “I’m not the typical Japanese mom,” but she adds, looking at her husband. “I got a lot of shows for you.”

“All of our kids are embarrassed,” Yosh said laughingly. “She opens a lot of doors. But she’s not a typical Asian woman.”

For more information about the Hillcrest Festival of Fine Arts, visit www.HillcrestArtsFestival.org.