A special program highlighting the true experiences of Japanese pioneers from Anaheim, Calif., at the Poston, Ariz., incarceration camp during WWII will be  held on Aug. 24. 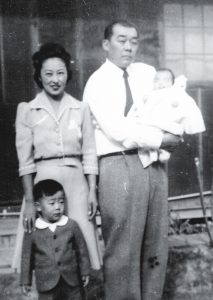 Originally from Anaheim, Calif., the Shigekawa family is shown while incarcerated in Poston, Ariz. Pictured are Kiyoshi and Misako Shigekawa along with their son, Gerald (bottom), and daughter, Marlene, who was born in Poston. (Photo: Courtesy of Marlene Shigekawa)

The history of the Japanese pioneers and their descendants in Anaheim, Calif., before World War II and their education at Anaheim High School has never been featured in a major educational event in Anaheim before, nor has the telling of their experience while at the Poston, Ariz., Japanese American incarceration camp where they were sent during World War II.

To preserve the legacy of these Japanese American students, the Anaheim Union High School District and Anaheim High School will present a special two-hour program titled “The Poston Experience: Paving the Way for the Next Generations,” which will be held on Aug. 24 from 11 a.m.-1 p.m. at Anaheim High School, located at 811 W. Lincoln Ave.

Janet Brown, field representative from U.S. Congressman J. Luis Correa’s Office of the 46th District, will also be in attendance.

The Japanese immigrated into Anaheim in the early 1900s, with Anaheim Union High School, as it was called then, being the center of North Orange County education for the Japanese community, not only for those who lived in Anaheim, but also others that lived in neighboring cities where students traveled many miles to go to school by bicycle or even walking.

Attendees now have the opportunity to relive this time in history and be part of a historic event where they will sit in the actual auditorium where the Anaheim High School student body assembled, in 1942, and was told by their principal, Dr. Paul H. Demaree, that their Japanese American friends had been forcibly sent to Japanese incarceration camps due to their ethnicity and would no longer attend the school for the foreseeable future because of the war. These Japanese American students used this opportunity to say goodbye.

The majority of the 30 Japanese and Japanese American students from the Anaheim Union High School Classes of 1942-45 were evacuated to a Japanese American incarceration camp in Poston, Ariz., and they were not able to complete their education at Anaheim or become part of their school’s graduating class.

However, this oversight was corrected in 1997, when the Anaheim Union High School District bestowed diplomas to surviving graduates during Anaheim High School’s graduation commencement ceremony that year, more than 50 years later.

The Aug. 24 program will feature Orange County leaders who went to Poston during WWII, a special presentation about an Anaheim pioneer family represented by Anaheim High School Class of 1962 graduate Marlene Shigekawa, who will talk about the Shigekawa family and her work in preserving the legacy of the Poston, Ariz., camp where she was born, as well as vocal renditions of songs from that time from students from the Anaheim Elementary School District and the Anaheim High School Las Sirenas Women’s Choir.

the families whose descendants were sent there and were never told about their family’s experiences. It is also an educational opportunity for students to learn about this time in history and how it reflects the current sign of the times in what minority families are facing today.

A new and original 10-minute documentary, which is being produced by AUHSD Summer Film Academy high school students entitled “Remember Us: An Historic Chapter at Anaheim High School,” will also make its debut at “The Poston Experience” program under the supervision of faculty adviser Jeff Numainville from Katella High School.

Admission for the program will be free for all those in attendance. Seating will be on a first-come, first-served basis, with limited seating available. Carpooling is also recommended.

This is the second major event in Southern California over the years to focus on the Poston experience. And for those who cannot attend the October Poston Pilgrimage, this is a great opportunity for JACL members and families to learn about this time in history.

For further event information on “The Poston Experience: Paving the Way for the Next Generations,” please call (714) 392-2103 or visit the AUHSD Facebook page for updates @AnaheimUnion.