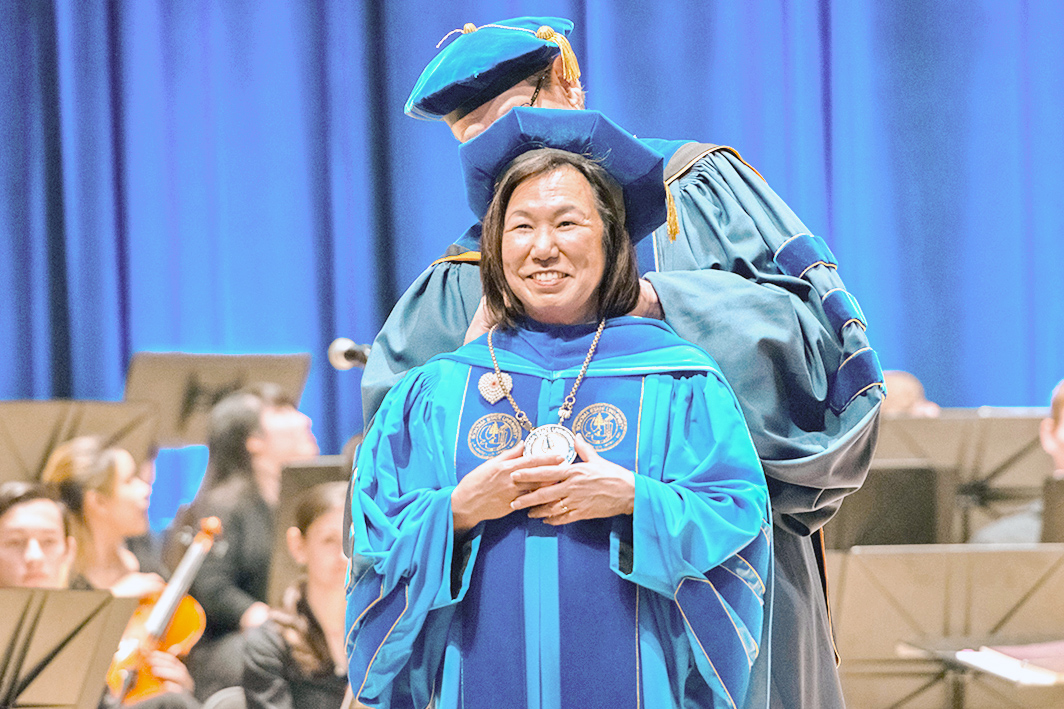 The Power to Make a Difference

The newly invested president of Sonoma State University still remembers the look on her father’s face when she told him she knew about the internment camps. 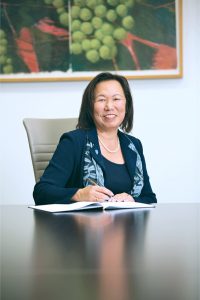 Dr. Judy Sakaki, president of Sonoma State University, credits her Issei and Nisei forebears for making the foundation upon which she built her many achievements.

Judy Sakaki, a third-generation Japanese American, or Sansei, was attending middle school in Oakland, Calif., when it happened. She was eating dinner with her parents when she brought up that somebody at school had said that Japanese Americans went to camp once. She had thought that meant they went to summer camp. She had no idea then that “camp” was where her family had been incarcerated with no say.

“It was something my family did not really talk about,” Sakaki said.

When Sakaki brought it up, her mother shushed her. A certain look came over her father’s face. They all finished dinner without mentioning it again.

Decades have passed since that tense dinnertime, and in an investiture ceremony themed “Dance With Change,” held April 20 at the Rohnert Park campus, Sakaki was officially sworn in as Sonoma State’s president and the U.S.’ first Japanese American female president of a four-year university.

“That was actually quite surprising to me because it seems like in this day and age, we should be past firsts,” Sakaki said.

The university is marking Sakaki’s investiture with her own exhibit about her life, an exhibit that will remain open in the university library through the summer.

Sakaki’s investiture happens to come during the year of the 75th anniversary of Executive Order 9066, which uprooted about 120,000 people of Japanese ancestry from their homes, businesses and neighborhoods and confined them to remote internment camps for the duration of World War II.

The exhibit is meant not just to showcase Sakaki’s life but also to showcase another success story of a descendant of immigrants during a time of political turmoil, as well as uneasiness about the future for immigrants.

“I think the experience of Japanese Americans is important because it helps educate others, especially in the climate we’re in, to value immigrants,” Sakaki said. “We are a society of immigrants. We’ve all come to where we are from different places, and I felt it was important to share my story, particularly in this time.

Among the many mentors who encouraged Sakaki throughout her career is Patrick Hayashi, associate president emeritus, University of California, Office of the President.

Hayashi’s remarks are featured in the exhibit, and they acknowledge Sakaki’s efforts to successfully grant honorary degrees from the University of California to Japanese Americans who were interned during World War II.

‘Power of One Person’

Sakaki doesn’t believe she would’ve gotten to where she is now if it hadn’t been for just one person.

When she was in school, there was no good reason for her, she said, to believe she would become a university president, or an astrophysicist, an engineer or a surgeon. Neither of her parents attended college because they had been sent to the internment camps instead. Her own high school teacher didn’t encourage her to aim for college. So, at first, Sakaki didn’t.

That all changed when she happened to cross paths with a college outreach counselor, who told Sakaki she should aim higher for a college education. Sakaki believes that one person helped change the trajectory of her life.

That’s a lesson she said she hopes to impart to others through her presidency, and it’s a story that she believes resonates especially with first-generation college students like herself.

“I want everyone to realize that anything is possible,” she said. “I didn’t grow up thinking I was going to be a university president, but there were others who reached out and helped me, and I want others to know that it’s possible.”

In every city she’s lived in throughout her career, Sakaki said she has made sure to renew her membership with the local Japanese American Citizens League chapter. She’s been a member for years, just like her parents and her grandparents, who were always members of JACL.

It’s just one of the ways Sakaki has clung onto her Japanese American identity, which she says has informed her style of leadership and her priorities as a university administrator. The values of gaman and gambatte, which mean “perseverance without complaint,” learned from her family still guide her leadership today, she said.

When she was younger, Sakaki attended Japanese language school on Saturdays and Sunday school at a Buddhist church, though she doesn’t remember as much Japanese nowadays. She also played taiko and made sure that her two children played taiko to learn and practice discipline.

Taiko players performed at Sakaki’s investiture ceremony, which also included a Buddhist offering of gratitude, a Miwok Native American blessing and a keynote address, “The Power and Promise of Higher Education,” given by one of her mentors, Michael V. Drake, president of Ohio State University.

Sakaki was chosen to be Sonoma State’s new president in January 2016, continuing an educational career that has been entirely spent within California’s public university systems.

At the time of her appointment, Sakaki was working on issues of student access at the University of California, Office of the President. Some of her work there included testifying before state legislature committees about financial aid and gender equity in university athletics and student mental health, according to Sonoma State’s website. She has also worked as a university administrator at the University of California, Davis, and at Fresno State.

Some of her goals as Sonoma State’s president include ensuring affordable access for first-generation and minority students. Since starting her job on July 1 of last year, Sakaki has helped Sonoma State achieve eligibility status as a Hispanic Serving Institution, according to Sonoma State’s website.

She is also working to create support centers for undocumented students and transfer students, according to the university’s website.

In addition, Sakaki said she wants to increase Sonoma State’s visibility in the community, particularly among minority students. Sonoma State, founded in 1961, has a student body of about 9,400 people.

“I think we’re a little bit of a hidden gem, and I don’t think as many people know about it as they could,” Sakaki said.

During her tenure there, Sakaki aims to use her voice and the “power of one” to truly make a difference at the university.

An exhibit at the University Library titled, “I am because … Dr. Judy K. Sakaki’s Journey to the SSU Presidency,” runs through the summer and details the personal story of how Sakaki was influenced by people and events during her life, as well as personal family artifacts that tell her story.

Curated by Dana Ogo Shew, a Sonoma State archeologist and oral historian, the exhibit also includes homemade artifacts from Sakaki’s parents, created while they were each interned during World War II following the issuing of Executive Order 9066 by President Franklin D. Roosevelt.

The exhibit is open daily.