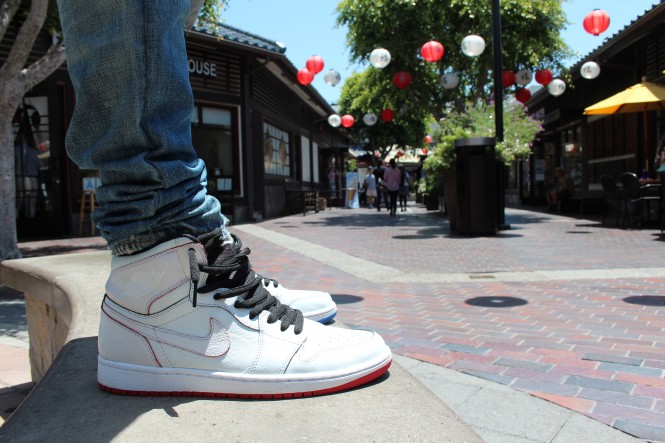 The Soles of J-Town

Little Tokyo in downtown Los Angeles is a quaint historical and cultural real estate, sitting between the 110 Freeway and the Los Angeles River. Equipped with Japanese-themed architecture, Americana character, a historical museum and delicious dining, Little Tokyo draws in locals, community groups, students on field trips and tourists all year long. It sits at the core of the largest Japanese American population in North America — and possibly for sneakers.

OK,so maybe it’s not the sneaker culture epicenter, but it’s hard to ignore Little Tokyo’s increasing popularity with sneaker enthusiasts and businesses. In a quarter-mile radius on and near Second Street is RIF Los Angeles, Illest, Jason Markk and Footland Sports. Four sneaker-related shops cohabitating next to sushi restaurants and Japanese craft stores.

A casual stroll through the plaza is met with a high chance of smelling Mitsuru Café’s imagawayakis and spotting trendy sneakers. Now amongst the usual crowds is a new set of visitors — from professional athletes to actors — journeying into Little Tokyo for an entirely different purpose. 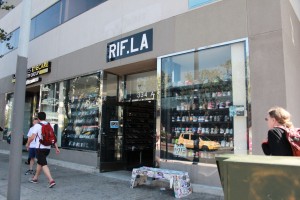 RIF storefront with its iconic bench is a popular photo op for customers and celebrities. Photo by Tiffany Ujiiye

They come to visit stores like RIF Los Angeles, a consignment sneaker store. The museum like sneaker storefront was originally named L.A. Avenue when co-owners Ed Mateo and Jeff Malabanan bought the store from Kai Nagakusa in 2006. The name change to RIF came from Mateo and Malabanan’s dream to reinforce not just shoes but cultures and ideas.

“It just stuck to us,” Mateo explained. “We didn’t want to just stand for sneakers.”

At the time, L.A. Avenue had another location in Shibuya, Tokyo. But Nagakusa decided to sell the Little Tokyo store due to the slipping economy.

A new RIF faced an increasing unemployment rate, the end of the housing boom and a shrinking consumption rate. Sneaker communities weren’t popular, and neither was reselling Nike basketball shoes and collectibles.

“But Jeff and I thought, ‘Why not?’” Mateo said, leaning back in his seat. He and Malabanan pulled together a small loan and kept RIF in Little Tokyo. 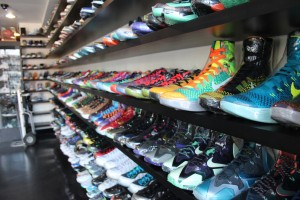 Back in 2006 when Mateo and Malabanan purchased L.A. Avenue, only one other sneaker consignment store existed in Los Angeles, Flight Club on Fairfax Avenue. Originally from New York City, Flight Club is arguably the world’s largest sneaker marketplace. “In the reselling game, it’s not about how cool it is, it’s about merchandise” Mateo said, explaining Flight Club’s strength.

“That’s why they’ve been so strong all of these years. They control the pricing. The prices are high and everyone complains, but people still buy them.” Even with a large inventory and a hand in the market, stores like RIF remain highly relevant because of the culture, bringing in consumers from across the nation to Little Tokyo.

For RIF and Flight Club, profits are made when clients bring in product to the store, in this case, shoes. Next, the shop and the client will negotiate the shoe’s market value to sell at an appropriate price. Once the shoe is sold, a certain percentage is given to the client and the shop.
“That’s where consignment was,” said Mateo. “When you go to Japan, they don’t just have consignment shoe stores. You’ll find women’s clothing, purse stores — everything. So, the original owner brought that idea down here to Little Tokyo because it was a Japanese company.”

RIF opened its second consignment location just next door in 2012, and it carries premium street wear clothing and accessories. Both stores receive special visits from such recording superstars as Macklemore and Kendrick Lamar, as well as the NFL’s Mark Ingram and actor Orlando Bloom. The list goes on and on.

Just visit their Instagram @riflosangeles and one can join the 200,000-plus followers to see pieces of Little Tokyo in the background and endless scrolling of visitors coming into the stores.

“There was someone from Chicago who came down,” Mateo recalled. “He brought down his U-Haul on a Saturday with over 160 pairs or so, and we bought them.” The collection carried recent Nike sneaker releases, as well as retro Michael Jordans and the entire Supreme SB set, including two low dunks, dunk high Supremes and a set of blazers. Each shoe sold for roughly $600 a pair and moved quickly off the shelf.
“You could tell it was a collection he had built over time by just the merchandise he had,” Mateo said. “I kept the dunk lows though — just one.”

Today, the majority of RIF’s sales are generated from online consumers, with orders coming in stateside and internationally. But the store still experiences regular foot traffic each and every day. 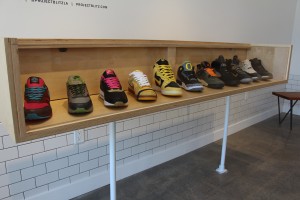 Inside Jason Markk’s flagship store is some of Croatian Style’s sneaker collection on exhibit with an Undefeated Air Jordan IV and a Watch the Throne Lebron 9 to name a few. Photo by Tiffany Ujiiye

Just across the street from RIF is Jason Markk, a friend to RIF and sneaker enthusiasts everywhere. Jason Markk, a premium goods and accessories brand for the sneaker market, opened its first brick-and-mortar shop last month. The shop offers a full cleaning service for sneakers, ranging from a classic clean at $10 to a Purp Special at $32 for deep cleaning on premium materials.

The shop has already received visits from two pairs of Kobe 9 Elites, an OG pair of 1985 Air Jordan 1’s and all of the Yeezy models and color ways for service. Before and after photos are available on the store’s Instagram @jasonmarkk, bringing back soles to life.
President Jason Mark Angsuvarn from Torrance, Calif., was born to a Filipino mother and a Thai father. As an Asian American kid growing up in the South Bay, he always had an interest in sneakers, wearing Nike’s and Vans Sk8 Highs around town.

In 2006, the same year Mateo and Malabanan purchased RIF, Angsuvarn found a hole in a growing sneaker culture.

“For a long time I was using a home remedy to clean my sneakers, and I thought, ‘There’s gotta be a better way,” Angsuvarn explained. “I went to sneaker lineups  — even boutiques — and asked how they cleaned their shoes. Everyone had their own solution, but they didn’t have that one go-to product. Then I realized there was a hole there that I could fill, so I developed this concept, and I jumped ship.”

The California State University, Long Beach, graduate left his job at an advertising agency a year later and founded Jason Markk, which is named after his first and middle name, plus an extra “k.” Operations began in his parent’s garage in Torrance, then on to his sister’s home in Signal Hill, then to the Arts District in Downtown before finally settling in Little Tokyo.

“It just felt right,” Angsuvarn said, thinking about the store’s opening. “I’m so glad that we made the decision to move to Little Tokyo.” Prior to signing a lease in Little Tokyo, Angsuvarn and his team considered La Brea Boulevard and Fairfax Avenue, recognizing that elevated street wear brands such as Stussy, Undefeated and Union lived there.

“Nothing against La Brea, I love La Brea, but we never try to do what’s necessarily hot or trending, so in that aspect, we were doing our own thing and not following,” Angsuvarn said. “So, Little Tokyo felt right for the brand.”

Along with its popular cleaning service, visitors to the flagship store can view an Undefeated Air Jordan IV, a yellow lobster SB, Wu Tang Clan Dunk High and a Watch the Throne Lebron 9 in a small gallery exhibit that will regularly change with different collections and collectors.
“I don’t think I’ve ever seen any of these shoes in person,” a customer said looking through the glass. “Just on a computer screen — crazy.”

“We’ve had quite a few pairs come in as referrals from our friends over at RIF,” Angsuvarn said. “It works out perfectly because when the customer gets their kicks cleaned by us, it increases the sneakers’ value, and everybody wins.”

Although the flagship store doesn’t accept shipped sneakers to the store for service at this time, that may change due to increased interest. Discussion for more store locations is already in the process, with New York as Jason Markk’s next stop. Plans also include Chicago, Miami, San Francisco, London, Spain and Tokyo.

“Never, to be honest, did I think I’d open a brick and mortar,” Angsuvarn said smiling. “I love it.”

Currently, Jason Markk offers only nine shoe cleaning products, but will include a repellant line by the end of July that provides waterproofing and protection for shoes. Angsuvarn and his team are also developing a solution to remove yellowing from discolored soles without the use of gloves and masks. Since existing products on the market are dangerous to handle, Jason Markk hopes to create a safer solution.
As the sneaker communities grow, so, too, have national shoe collector events, where collectors and sellers can meet to buy and sell shoes. 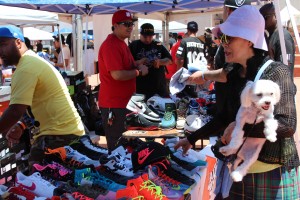 A woman inquires about a pair of Jordan 11’s at Little Tokyo’s DXC. Photo by Tiffany Ujiiye

National events like DunkxChange visited Little Tokyo for the fist time in conjunction with Jason Markk’s store opening last month. DunkxChange drew in a little more than a thousand visitors to Little Tokyo who were looking to buy the latest Kobe 9s or classic Michael Jordans.

NiceKicks.com, the largest sneaker blog online, posted a full-coverage video of Little Tokyo, highlighting the shops and shoes. (To view the video)

The traveling sneaker event is a buy-sell-trade space for sneaker enthusiasts and entrepreneurs as well as artists and performers, touring to cities such as New York City, Miami, Honolulu, San Francisco and Las Vegas.

International tours in the coming year include stops in London, Puerto Rico, Paris, Berlin and Australia, with a possible visit to Japan.
“We haven’t been to Japan because it’s just physically difficult with limited spacing,” CFO Curtis Brown explains. “But we’re still looking into it. We already went to the Philippines with a good turn out because the Asian consumer is huge.” 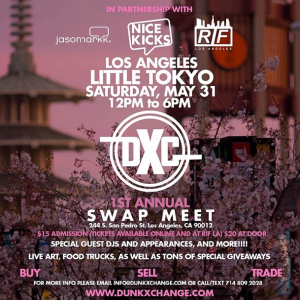 “We’ve never done an outdoor event, and Jeff at RIF thought it’d be kind of cool to do something together,” Brown said. “We started talking, and it turned into an event.” Prior to RIF, Malabanan was a vendor at DunkxChange, buying and selling his sneakers. Now after making a splash in Little Tokyo, DunkxChange could return next year.

As sneakers become mainstream, catching the words of reporters and magazine features, players like RIF and Jason Markk in Little Tokyo are putting their foot or, more appropriately, their sneakers in the game.