The Story of the 442nd Patch

The symbol of the decorated Army unit was designed by Mitchie M. Miyamoto.

The 442nd Regimental Combat Team is the US Army’s most-decorated unit for its size in military history. Created in response to the War Department’s call for volunteers to serve during World War II, more than 12,000 Nisei Japanese American men fought with a “Go for Broke” spirit in some of the greatest battles held in Europe during the war. In all, the unit was awarded more than 18,000 commendations in less than two years for their bravery, honor and courage in helping to turn the tide to an American victory in WWII. 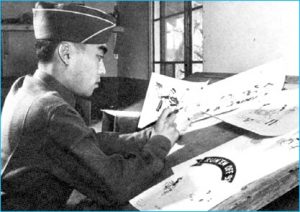 Mitchie Miyamoto of the 442nd RCT was also an accomplished cartoonist, considered by many in his unit to be “second only to Walt Disney.” (Photo: Courtesy of Mas Hashimoto)

The history of the 442nd’s shoulder sleeve insignia has its roots in California.

Mitchie “Mitch” Miyamoto was a proud graduate of Watsonville High School, Class of 1938. In October 1941, he was drafted into the US Army, and he took his basic training in Kansas at Ft. Riley.

After the Pearl Harbor attack on Dec. 7, 1941, Miyamoto was transferred to Camp Hale, Colo.

In the spring of 1943, he was sent to assist in the formation of the 442nd Regimental Combat Team at Camp Shelby, Miss.

The original 442nd patch, approved on July 31, 1943, was designed by War Department artists, and it depicted a yellow arm brandishing a blood-dripping sword. The racial overtones of the design were obvious and obnoxious.

Everyone in the unit hated it.

Sgt. Miyamoto, 3rd Battalion, then designed a patch of a silver hand holding the torch of liberty against a sky of blue, surrounded by a border of silver and red. Its design depicted a positive symbol of freedom and liberty for all, regardless of race or color — goals the men could fight and die for. 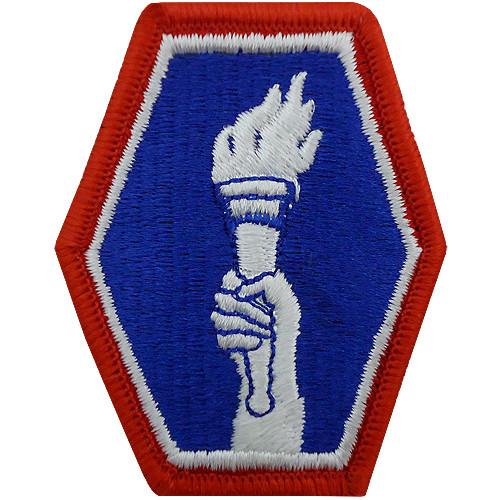 Some criticized the shape of the patch. They thought it was coffin shaped. Still, others believed the shape was appropriate. Many were to die while proudly wearing their famous shoulder patch, which ultimately was approved on Dec. 16, 1943. German troops quickly learned to fear the men who wore the red, white and blue patch.

The Rescue of the Texas Lost Battalion of the 36th Division gained the 442nd patch enduring fame.

Miyamoto received the Bronze Star from Maj. Gen. E. M. Almond for his meritorious service rendered while in combat. He was frequently exposed to enemy fire while making trips to the forward areas to attest the accuracy of the maps in use. His knowledge of maps and his ability to accurately locate difficult spots on the terrain quickly won him gratitude of the men and commanding officer he served.

After the war, Miyamoto married Martha and raised a daughter, Teri, and two sons, Roger and Martin.

In 1955, he returned to Watsonville and was employed by Charles Ford Department Store for more than 32 years. He was the recipient of many national awards and honors for his outstanding window displays and advertising skills.

In the history section of the Smithsonian Institution on the mall in Washington, D.C., opposite the original “Star Spangled Banner,” is an exhibit telling of the exploits of the 442nd.  The 442nd patch is displayed with the notation that it was designed by Mitchie Miyamoto, a member of the unit. All members of the 442nd are grateful to Mitch Miyamoto.