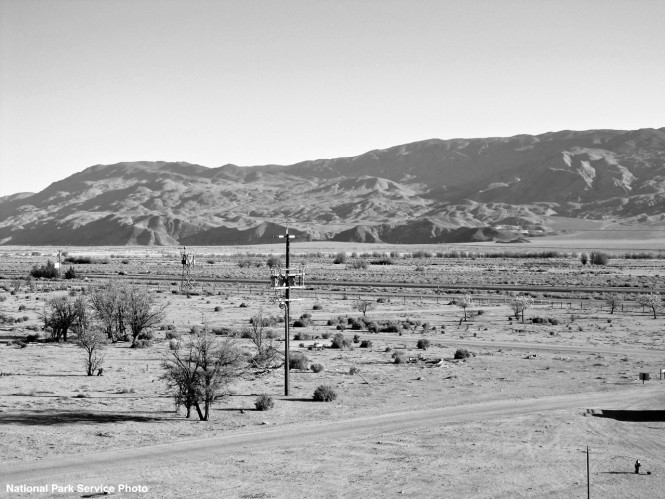 The Threat to Manzanar’s Historical Viewshed

It is that existential threat that is facing the Owens Valley, located in Inyo County in California. It is also the home to the Manzanar War Relocation Center, a National Historic Site operated by the National Park Service. It is one of 10 relocation camps where more than 110,000 Japanese American citizens and resident Japanese aliens were detained during World War II.

The State of California greatly accelerated and expanded its Renewables Portfolio Standard in 2011, becoming one of the most ambitious renewable energy standards in the country. The aggressive policy requires investor-owned utilities, electric service providers and community choice aggregators to obtain 33% of their total procurement of electricity from eligible renewable energy by 2020. 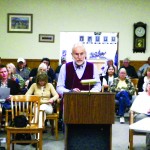 Under the deadline to meet the state’s energy requirements, utilities such as the Los Angeles Department of Water and Power feel forced to turn to large-scale solar energy and wind turbine projects. To meet the requirements, LADWP is proposing to build a two-mile square, 200-megawatt solar photovoltaic ranch just northeast of Manzanar with up to as many as 2 million ground-mounted panels. Twelve-thousand acres would be cleared of all vegetation, graded, access roads built, and the entire area enclosed in a high fence with outdoor lighting at night.

On Jan. 26 in Independence, Calif., more than 70 members of the public attended the Inyo County Planning Commission meeting to approve the forwarding of the draft report of the Renewable Energy General Plan Amendment to the County Board of Supervisors. The draft amendment by the REGPA was an attempt to designate areas within the county with the most likely “potential” for renewable energy production.

All but one of the 32 speakers offering public comments over three hours strongly opposed sending the draft REGPA to the County’s Board of Supervisors.

Of particular concern to the public at the meeting was the effects on wildlife, the natural viewsheds from the valley floor and local mountains and the effect of having a large industrial solar energy plant visible from the Manzanar War Relocation Site.

Most present were not opposed to solar power generation. Paul Fretheim of Independence shared a presentation showing alternatives that other areas have used of how solar photovoltaic panels and sheets can be installed on rooftops of many commercial buildings and even as a covering over the aqueduct with solar panels rather that in large, industrialized areas. Many others were amenable to other locations, just not near the Manzanar Historic Site. 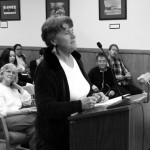 Educator and writer Eva Poole-Gilson reads from her book about her love of the Owens Valley as a young woman 26 years ago. Photo by Charles James

One speaker, Eva Poole-Gilson of Keough’s Hot Springs, a local educator and writer, read a poignant short passage from a book that she wrote 26 years ago as a young women new to the Owens Valley. She encouraged the commissioners to not allow the area be destroyed by allowing large industrial projects.

Cindy Kamler, founder and director for Eastern Sierra Wildlife Care, spoke up for the animals, saying, “When wildlife is displaced for any reason, it runs the increased risk of predation and that often results in death and even extinction.”

Japanese Americans from Southern California also attended the meeting in opposition to the plan as harmful and disrespectful to the Manzanar Historic Site, saying that Manzanar serves as a reminder to the public on the dangers of intolerance and allows visitors a sense of what it must have been like to be held in an isolated, desolate area because of prejudice and racism.

Traveling more than 300 miles from Torrance, Calif., Kanti Sahara told planning commissioners that the City of Los Angeles should force its residents and businesses to put solar panels on their roofs.

Added Manzanar Committee member Gann Matsuda, “Isolation and desolation was a deliberate attempt to take away ‘hope,’ and that important, historical part of the experience would be lost should the solar ranch project proposed by LADWP be built.”

PSW’s Traci Ishigo spoke of the importance of the Manzanar experience for young Japanese Americans. In addition, PSW’s Nancy Takayama spoke on behalf of her parents, “survivors of Manzanar,” noting that she “does not object to the solar farms, I just don’t want it near Manzanar.”

Dwight Deakin spoke on behalf the China Lake Naval Weapons Testing Station, noting that PV installations do not present much of problem other than mild clutter on radar screens, but solar thermal plants are very hot and “the military uses weapons that seek out things that emit heat to ‘destroy them,’” drawing laughter. Wind turbines, he said, present problems with obstruction and are a threat to aircraft and some weapons as well as create a problem with radar interference.

Summing up the biggest issue for most present was speaker Daniel Pritchett:

“The real issue is the City of Los Angeles. They are proposing to build the solar project south of Independence and across from Manzanar.”

Despite the overwhelming disapproval of those present at the public meeting, the planning commissioners voted 4-1 to send the draft amendment forward to the County’s Board of Supervisors to jeers and shouts of disapproval.