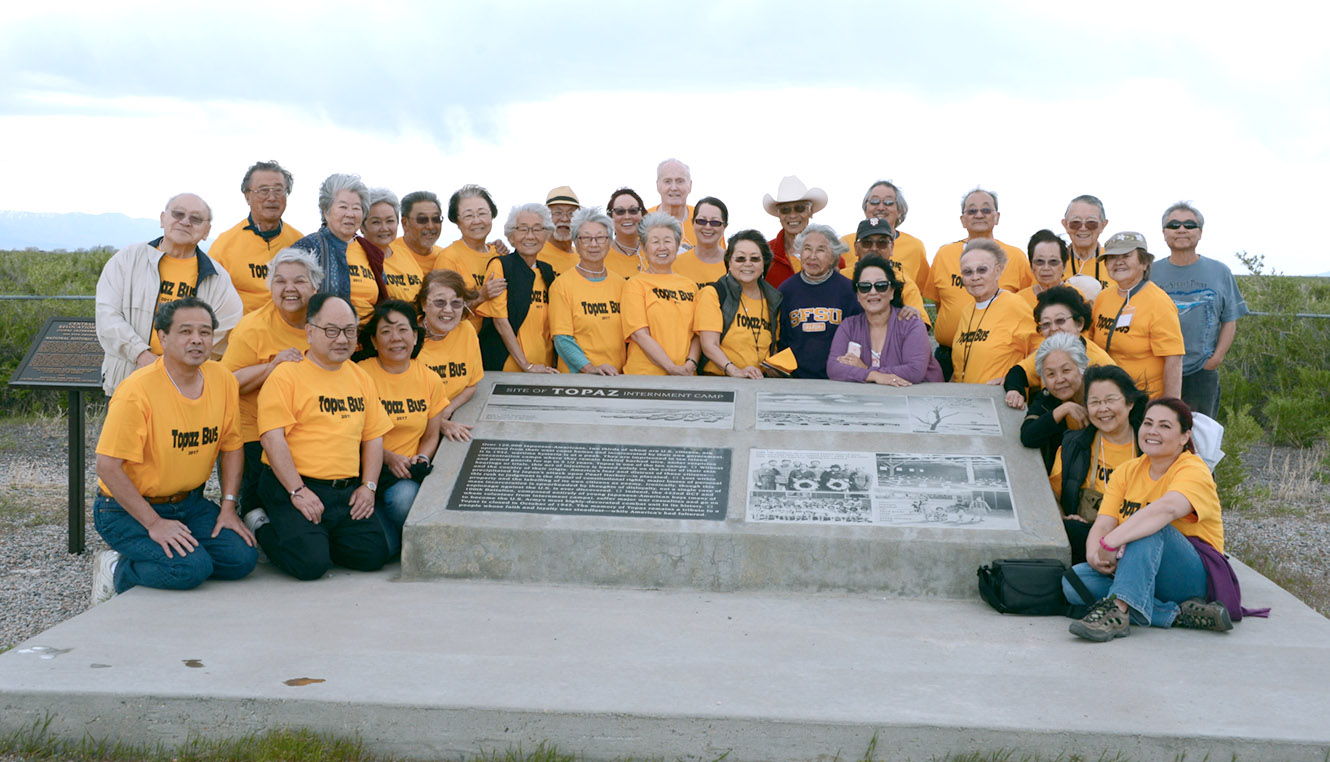 Participants of the 2017 Topaz pilgrimage gather for a group photo at the site of the marker for the Topaz WRA Center in Utah.

Pilgrims turn a painful time in history into a trip that brings about a renewed sense of hope and appreciation for a home that fully welcomes them back.

Toru Saito of Berkeley, Calif., has become known for the “Topaz Bus” pilgrimages he started leading in 2002. He charters a bus and escorts a busload of Northern California pilgrims back to the Sevier Desert in Utah for a several-day, 1,500-mile round trip to revisit family memories and excavate community history.

But this year’s pilgrimage, which took place April 22-26, was Saito’s sixth, and it was a special journey that even he couldn’t have foreseen.

Perhaps it was the fact that 2017 is the 75th anniversary of Executive Order 9066, with commemorative events being held across the country. Maybe it was because the Topaz Museum has announced its grand opening for July in Delta, Utah. It also could of been that he was bringing back to Utah a wooden box that was packed as Topaz was closing in 1945 and hadn’t been opened since.

This year’s pilgrimage took 32 Nisei, Sansei and Yonsei family members and friends to the deserted remains of the WRA concentration camp. Recalling when shades had to be pulled down on the trains transporting thousands of innocent people to the permanent camps following the onset of World War II, passengers this time freely lifted and drew the blinds on the luxury bus.

The pilgrims, some going to Topaz for the first time, ranged in age from 42 years to 90 years. They took what they could carry and more — taiko drums, ukuleles, rice cookers, homemade peanut brittle and the unopened wooden box.

Once the group arrived in Utah, the box was finally opened, much to the great anticipation of those gathered to witness the anticipated reveal.

A plush cotton mattress, a luxury in its day, was found to be inside when the box was finally unsealed, its nails pulled out by a Ryobi hand tool.

Saito has lent the mattress for display until July 2 at the MIS Historic Learning Center in San Francisco, which is managed by the National Japanese American Historical Society.

Once in Utah, the pilgrimage group visited the new Topaz Museum and admired the exhibits in the building, which is holding its official grand opening celebration July 7-8 in Delta. Visitors viewed photographs of their family members and found their barrack in a scale model of the camp.

The pilgrims also spent a day and a half at the Topaz site. They walked the sun-hardened grounds and held a Japanese feast in memory of ancestors who, held under government custody, could not enjoy longed-for homemade delicacies.

The “menu of the desert” included kamaboko, teriyaki chicken, fresh pineapple, cold tofu, umeboshi, fine sake, spam musubi and potato chips. Part of the feast was held on the concrete pad of the old Block 4 Mess Hall. It was followed by an impromptu taiko practice with a clear view, unobstructed by barracks, of the Topaz mountains.

In an unplanned stop, the pilgrims spotted through the window a wooden marker created in memory of James Hatsuaki Wakasa, 63, who was shot five feet inside the barbed-wire fence by a military sentry in April 1943. The group asked the bus driver to stop.

All alighted the bus and laid paper flowers, which had been made for an evening event, and ojuzu on the sign that had been built by a local boys’ club. Pilgrims climbed both ways through the barbed wire, which Wakasa was wrongly accused of going through “to escape through the fence,” according to the WRA and U.S. Army wartime news releases that were never corrected. Those who were wearing “Never Again” T-shirts stood at the memorial and raised their fists in remembrance.

For the last leg of the trip, one final event was scheduled or, rather, fell into place, by the grace of several Berkeley religious institutions, the local historical society and the Berkeley chapter of the JACL.

By poetic coincidence, Saito’s bus tour returned to Berkeley on April 26, the very day that 75 years ago the military registration began at the First Congregational Church on Dana Street, where U.S. Army buses prepared to take 1,300 Japanese Americans from Berkeley, devastating a community that had been established for 40 years.

The church is near the University of California’s flagship campus and is still a traumatic address for some who are old enough to remember. One Nisei who was in high school in 1942 confessed that he is still unable to drive down the street, now 75 years later.

The church had offered the use of its grounds in 1942 to the military so that the American Japanese community would not have to register for family numbers and depart for Tanforan from a used car lot on Shattuck Avenue.

The church pastor at the time, Rev. Vere Loper, said goodbye to each departing bus. One church board member voted not to support the U.S. government’s “dirty business” but was overruled by those who felt that offering the use of the church grounds was the humane thing to do.

Four people on the Topaz bus also were on the military buses that left the church in 1942: Ruth Ichinaga, who was 7 years old; Kazuko Iwahashi, 12; Richard Takao Furuzawa, five months; and Richard Sekiguchi, 9 years old.

“I do remember standing on the sidewalk with luggage and my parents,” said Sekiguchi to a local TV reporter.

In remembrance of this city history, the First Church held a commemorative reading and artifact display that evening. The Berkeley Historical Society also announced the unveiling of a metal plaque recording the 1942 exile, and the Berkeley chapter of the JACL co-sponsored with the University of California, Berkeley, and other groups a lecture on campus.

As the dusty bus rolled up to the church sidewalk upon its return home, emotion and tears welled up inside the bus. Through the windows, pilgrims could see the smiling faces of strangers holding signs. All held placards that read, “Welcome Back.”

Rev. Molly Baskette of First Church, Rev. Kevin Omi of Sycamore Church and Rev. Candice Shibata of the Berkeley Buddhist Temple led the group that assembled to greet the pilgrims. Church member Milton Fujii said that it was a moving day.

When Furuzawa got off the bus, he reminded a local reporter for the East Bay Times that detention centers are being built to hold undocumented immigrants.

“That could be the start of an internment camp,” he said, adding, “I’m watering it down a bit, by using the term ‘internment.’ If you look at the definition, it’s really a concentration camp.”