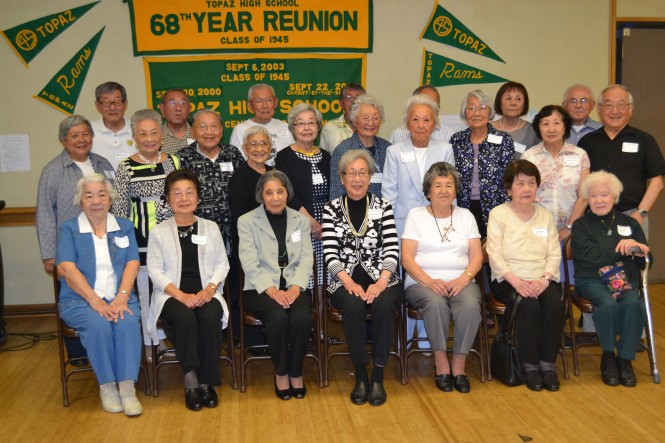 OAKLAND, CALIF. — Sixty-nine years ago, they received their diplomas from a high school in the Topaz, Utah, Concentration Camp, the only high school class to spend its entire three and a half years behind barbed wire following the issuing of Executive Order 9066 in 1942.

“There was not one act of sabotage or espionage committed by loyal Japanese Americans before, during or after World War II. It was because of racism and the failure of our government that we spent our entire high school careers behind barbed wire,” said reunion chairperson Ret. Army Lt. Col. Bob Utsumi of Oakland, Calif.

Now, the Topaz High School Class of 1945 will gather again for a historic reunion of former classmates to reminisce and reflect on their lives since graduating nearly 70 years ago. Class members and their offspring are invited to attend the 69th year Topaz High School Reunion at the Sequoyah Country Club in Oakland on June 28.

The day’s program will include displays of photographers, maps, dioramas, woodcarvings and other memorabilia from Topaz. Each class member will re-create a replica of the government-issued identification tag imprinted with their name as well as their family’s prison camp number.

The reunion’s keynote speaker will be Patrick Hayashi, former associate president for the University of California System.

Born in the Topaz Concentration Camp, Hayashi has been interviewing many members of the Topaz Class of 1945 and will share his insights into the qualities and characteristics that make this group of Nikkei unique.

“The Topaz Class of ’45 includes five Lt. Colonels, numerous PhDs and other graduate degrees,” noted reunion coordinator Daisy Uyeda Satoda. “Our class also generated a group of writers who created the autobiographical anthology “Blossoms in the Desert: Topaz High Class of 1945” about what it is really like to come of age in an American concentration camp during World War II.”

Also sharing her experience will be former student Mary Tamaki Murakami of Bethesda, Md., who continues to talk with students, schools and organizations about the challenges her class endured during WWII. Despite wartime hardships, Murakami continued her education at the University of California, Berkeley, where she earned a degree in public health/microbiology.

“If you want to go to college, you study like you’re going to go to college, although you don’t know when camp is going to close or when you’ll ever get home to California,” she recalled. “That was one of the things that kept most people going — the feeling that they can’t defeat you.”

Music from the 1940s and ’50s will be performed by Mark Inouye, principal trumpeter with the San Francisco Symphony and the son of the late Tak Inouye (Topaz ’45).