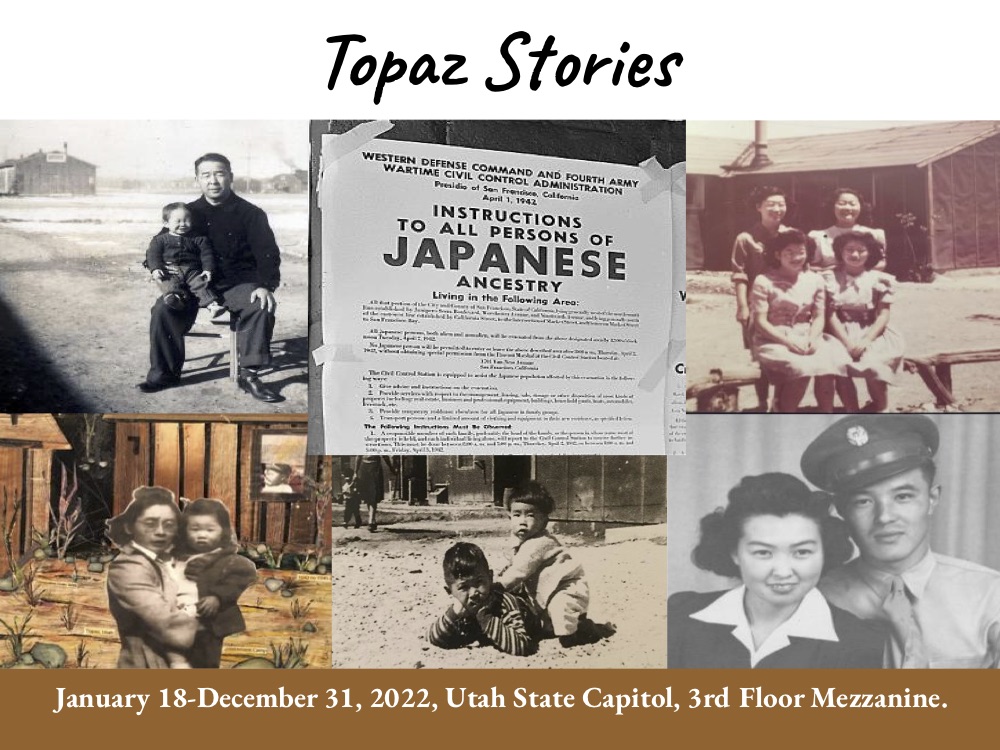 “Topaz Stories” exhibit will be on display at the Utah State Capitol Building until Dec. 31. (Photo: Courtesy of the Topaz Museum)

DELTA, Utah — The Topaz Museum Board is happy to announce the appointment of four new members: Kiley Chase, Sherrie Hayashi, Ned Isokawa and Patricia Wakida. Their terms began in January.

Kiley Chase resides in Delta, Utah, and works at the Intermountain Power Service Corp. He grew up in Leamington, Utah, about 18 miles from Delta, and returned to the area after graduating from Utah State University.

He is a current member of the Delta City Council and has served as liaison to the Delta City Library Board, the Public Works Department and the Planning and Zoning Commission. He has a history of public service and is a past president of the Delta Area Chamber of Commerce.

Sherrie Hayashi is a descendant of the Fujii family, who was incarcerated at Topaz during World War II. She currently works at the University of Utah, where she earned her juris doctor, and serves as the director of the Office of Equal Opportunity and Title IX Coordinator.

Hayashi is a former commissioner of the Utah Labor Commission and served as a cabinet member of former Utah Govs. Jon M. Huntsman and Gary Herbert. Hayashi is active in the Japanese American community and is a long-standing board member of the Salt Lake chapter of the Japanese American Citizens League, as well as a past president. Following in the footsteps of her grandparents and her parents, she resides in Salt Lake City.

Ned Nobuo Isokawa was born in Topaz. His family moved back to their hometown of Oakland, Calif., after the war ended, and he has lived in the East Bay ever since. After attending Oakland public schools, he enrolled at the University of California, Berkeley, and graduated with a B.S. degree in electrical engineering and a J.D. degree from the UC Berkeley Law School.

A retired attorney, Isokawa was a partner in the Oakland and San Francisco offices of large international law firms. From 2011-19, he served as board president of J-Sei, a senior service nonprofit serving the East Bay Japanese American community.

In 1993, he was board president of the Asian American Bar Association of the Greater Bay Area and is a member of the Leadership Council of Asian Americans Advancing Justice-Asian Law Caucus.

Patricia Wakida is a fourth-generation Japanese American living in Oakland, Calif. She has dedicated much of her career to researching, writing and creating artwork reflective of her culture and history.

Wakida’s public art installations includes a “Day of Remembrance” mandala with the Yonsei Memory Project at the Fresno Fairgrounds, “I Am An American Family No. 25344,” at the Fresno Housing Authority, and she is currently working on a Japanese American public artwork to be installed in Hayward, Calif., this year.

In addition, the Topaz Museum recently opened its newest exhibit, “Topaz Stories,” at the Utah State Capitol Building’s third floor mezzanine; the exhibit will be on display through Dec. 31.

Thirty-one stories from the WWII Japanese American incarceration at Topaz Relocation Center are on display that reflect the diverse voices of three generations of men, women and children who endured three years in the Utah desert, behind barbed wire and under armed guard, from September 1942-October 1945. Their only crime — their ancestry.

The exhibit features an innovative design by exhibit designer Jonathan Hirabayashi and a selection of artifacts from the Topaz Museum.

Originally set to open in 2020, the exhibit was postponed due to Covid and rescheduled through the efforts of Brad Westwood (Utah Department of Culture & Community Engagement) and Stephanie Angelides (capitol curator).