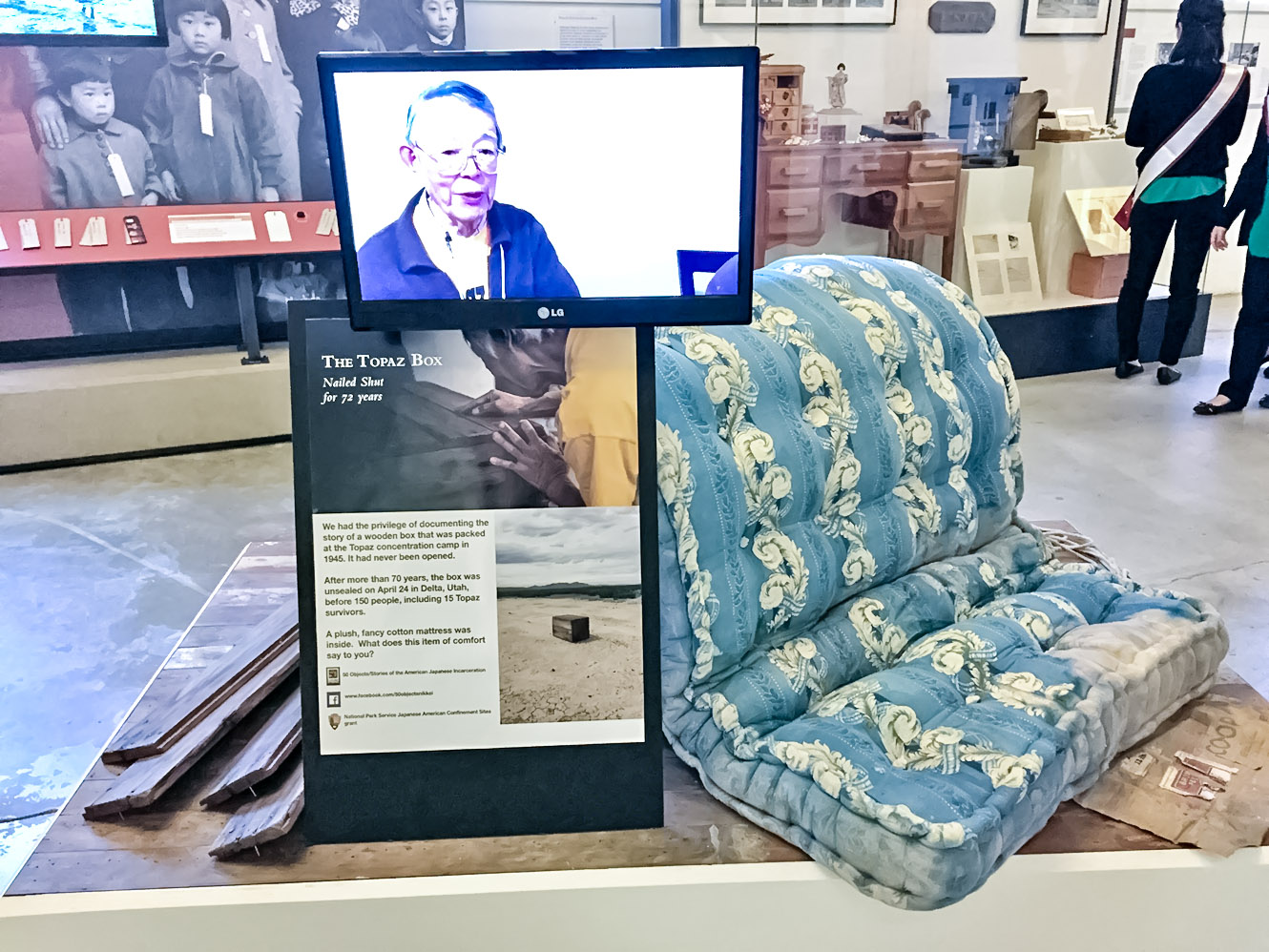 This mattress, now on display in San Francisco, had been stored for more than seven decades in a box with its contents unknown until it was opened April 24.

“It’s a mattress!” announced Ken Okabayashi of Elk Grove, Calif., to a curious crowd of 150 in Delta, Utah, as the contents of the Topaz mystery box were finally revealed on April 24 during a Nikkei bus pilgrimage to Topaz.

The weathered wooden box was packed at the Topaz concentration camp more than 70 years ago and had never been opened. Until now. The 50-pound cotton mattress inside the box was once a plush bedding item, which sparked surprise, laughter and reflection by those in attendance.

“This family acquired a real mattress and what they were going to send home was this wonderful piece of comfort that somehow they got,” said Satsuki Ina, who moderated the event held in the town’s community center.

“At least it’s not a hay mattress,” said Ben Takeshita of Richmond, Calif. He recalled arriving at the Tanforan Race Track, located south of San Francisco, in April 1942, and being given hay to stuff inside a cotton bag. Ever since that time, Takeshita has had hay fever. “I wonder if my hay fever came from that period.”

The box had been entrusted to a fellow camp mate after the war for safekeeping in Berkeley, Calif. But it was never reclaimed, and the box was eventually passed on to Toru Saito, 79, who spent four years of his childhood at Topaz.

After 18 years of storing it, Saito decided it was time for an unsealing.

Suspense built in the town center, located 17 miles from Topaz, as Kiyoshi Ina of Concord, Calif., who was born at Topaz, sawed through the nails with a Ryobi hand tool and lifted the top planks.

Kiyoshi Ina was among 32 camp survivors and family members who were on a five-day bus pilgrimage to Topaz from the San Francisco Bay Area, the sixth such trip led by Saito.

Fifty pounds of cotton makes for a thick, nearly five-inch-deep mattress, and it immediately evoked memories for Topaz survivors.

Saito said that the mattress conjured up for him scenes from John Steinbeck’s “Grapes of Wrath,” in which trucks and cars headed West during the Dust Bowl with “mattresses on the roofs of the car because that was the only possession they had.”

He said, “Maybe people were expecting all kinds of gold jewelry or whatever . . . but when you really think about it, [a mattress] is what you sleep on. It is what rejuvenates your body for the next day.”

Satsuki Ina, a psychotherapist from the Bay Area, told the gathering that she had talked to a man who was drafted out of the camps to fight in Europe. He realized that the body bags used for dead soldiers were what the American Japanese camp inmates had been given to stuff with straw for beds.

This represented “the makeshift temporary life,” she said, of not knowing how long those interned were going to be in the camps and the “cruel and unusual” circumstances of their World War II confinement.

The Topaz mattress will be on display at the MIS Historic Learning Center in San Francisco until July 2, according to Rosalyn Tonai, executive director of the National Japanese American Historical Society.