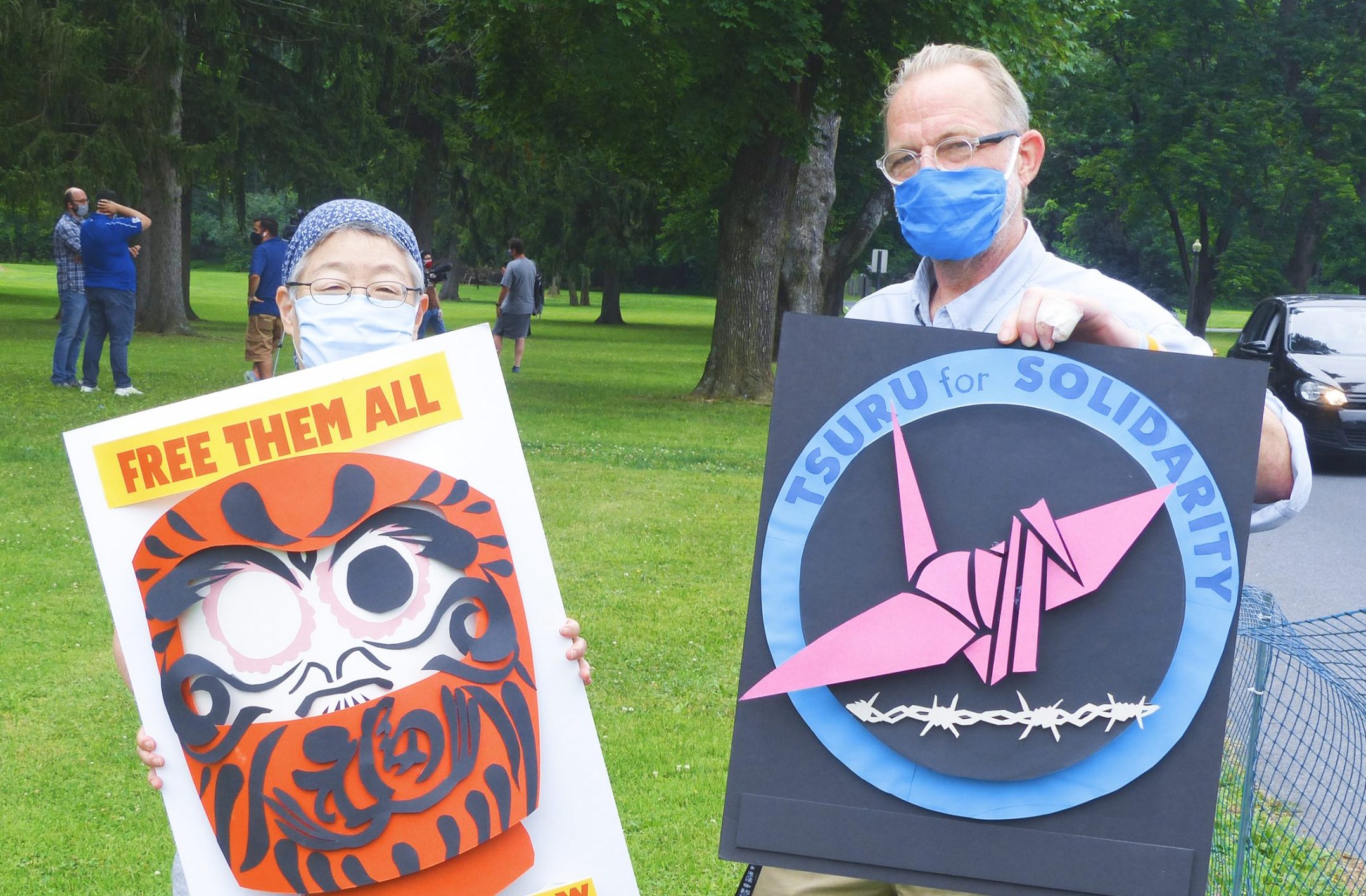 Tsuru for Solidarity continues its social justice mission as it reunites with JACL to shut down the Berks Family Residential Center in Pennsylvania.

‘If you have come here to help me, you are wasting your time. But if you have come because your liberation is bound up with mine, then let us work together.”

During that trip, a small group also traveled to a community center in Laredo, Texas, a town on the southern U.S. border. We sat in a circle with young organizers from Laredo Immigrant Alliance and LatinX families recently released from detention. There, we shared survival stories, and a profound connection emerged among this group of strangers. Thus was born Tsuru for Solidarity’s first Healing Circle for Change.

What we learned on that initial trip to Texas inspired us to continue. The events of the world also required that we engage and step onto the battleground of white supremacy that is targeting all communities of color, including Asians. 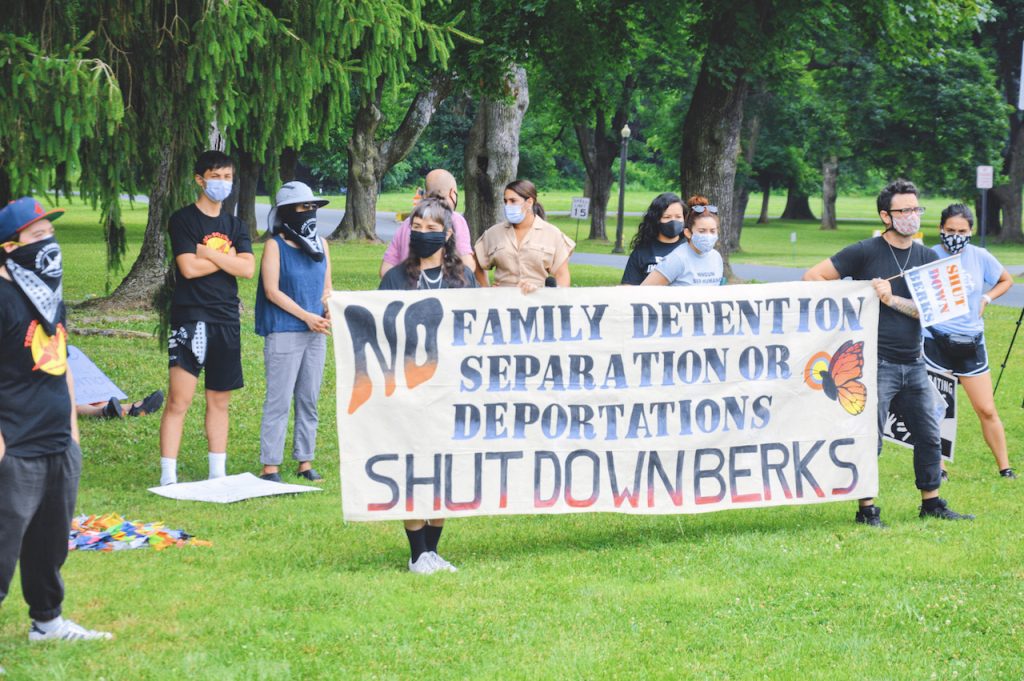 The peaceful protest was held outside the Berks Family Detention Center in Philadelphia. (Photo: Hiro Nishikawa)

In Tsuru for Solidarity, we recognized how embodying that role also had the unforeseen consequence of transforming those who participated in direct actions.

Our survivors connected to their moral authority and found their voices once again when we traveled to Fort Sill in Oklahoma where they stood up to the government. 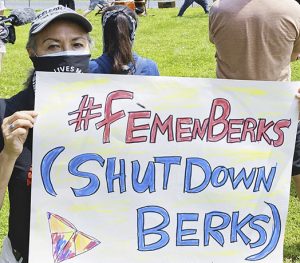 Protesters chanted and shouted messages of hope and resistance to the incarcerated families, who were allowed outside in the detention yard. (Photo: Hiro Nishikawa)

Descendants of survivors spoke of a connection to their family histories, something they had been seeking their entire lives. Families began talking openly among themselves about WWII incarceration. We found a way to reframe the narrative of our history in service and in alignment with other communities who were now being targeted. And in doing so, we were being healed.

We then began discussing the intergenerational trauma caused by the concentration camps — the consequential effects of the wartime incarceration upon our community.  We saw how naming and speaking out against white supremacy that had historically targeted our community gave us a sense of internal freedom and empowerment.

We planned a “Pilgrimage to Close the Camps” for June 2020 in Washington, D.C., which was later replaced, due to the COVID-19 pandemic, by a virtual national protest, “Healing Circles for Change” and “Kimochi Night of Culture and Celebration,” as well as coordinated direct actions at seven sites across the country. Nearly 30,000 people participated over the course of two days.

Coinciding with all of these developments was the ever-increasing growth of COVID-19, followed soon after by the uprisings and protests led by the Movement for Black Lives against anti-Black racism, requiring a country-wide reckoning of our history of violence and inequity toward Black people.

As a result, conversations began to occur about our own community’s assimilation into white culture and privilege, as a survival strategy, and our own history of anti-Blackness. We discussed how those dynamics have often placed us as a wedge against Black, Brown and Indigenous communities, affording many Japanese Americans middle-class status and creating a false narrative of the “model minority,” used as a tool of oppression against other people of color.

At what expense did being manipulated in this manner come? What effect did this have upon our identity and our principles? Upon younger Japanese Americans, many of them multiracial and struggling to understand their identity as we continued to assimilate?

In his book “Uprooted Americans: The Japanese Americans and the War Relocation Authority,” Dillon Myers, who ran the WRA, wrote:

“The most important result of the WRA program was the relocation of more than 50,000 Japanese all across the United States. … This dispersion of the population led to an understanding and acceptance on the part of the great American public that would have never been possible.”

Had Myers also succeeded in setting the conditions and convincing us to erase ourselves in this process of assimilation?

As this discourse was taking shape, camp survivors began speaking out more forcefully and more publicly, sometimes for the first time, on their anger over their own incarceration and at the current attacks on the civil rights of immigrants, Muslims, Indigenous and Black and Brown people. They were challenging their own assimilation toward white supremacy. 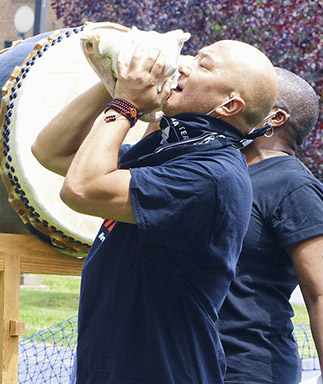 Meanwhile, Tsuru for Solidarity has continued to join in coalition with directly impacted communities at detention sites to build relationships of mutual support and solidarity.

We are creating intentional relationships with other communities of color around collective support, resistance, preservation of culture and history and the struggle against white supremacy.

In doing so, new opportunities for healing our fractured community have been revealed. We have come to use a term to loosely describe this whole process: “Transformative Solidarity.”

An example of this is the work in process to build coalition with the Haitian community in support of their work to free Haitian families at the Berks Family Residential Center, a detention site in Pennsylvania.

On July 17, in partnership with Haitian Women for Haitian Refugees, Haitian Bridge Alliance and Families for Freedom, Tsuru for Solidarity, along with the New York Day of Remembrance Committee and JACL chapters from Philadelphia and Washington, D.C., as well as other members of the Shut Down Berks Coalition, organized a two-hour, socially distanced protest outside the Berks facility. Those imprisoned at Berks are almost exclusively Black immigrant families from Haiti.

After an opening land acknowledgement and calling of the ancestors, a powerful moment occurred when the incarcerated families were allowed outside in the detention yard.

The protesters began drumming, chanting and shouting messages of hope and resistance in Creole. Japanese American taiko players joined in to form a cross-community drumming circle, and Haitian and Tsuru drummers led a call-and-response.

Both communities began blowing conches — the symbol of Neg Mawon, a legendary Haitian who broke the chains of slavery and blew the conch as a signal of freedom to other enslaved people.

The incarcerated families began jumping up and down and shouting back to the protesters, and the children, hearing the protesters calling to them in their native language, ran to the fence until guards intervened.

Both communities were able to come together by bringing their cultural traditions of liberation and struggle and art to a spontaneous form of communal resistance.

Ellen Somekawa, one of the Tsuru protesters from Philadelphia, commented: “Most impactful to me was seeing the families waving to us and dancing. It was impossible not to imagine my own family members back there and wonder what it would have been like if they had had allies present for them in that tangible way.”

In a Healing Circle following the action, Lauren Sumida, a Tsuru for Solidarity Communications Committee co-chair, reflected: “I’m appreciative for an opportunity to stand in solidarity. When I see these young children in Berks, I’m heartbroken wondering how many generations of their children will be trying to heal the trauma these families are now experiencing. We understand this …”

In conjunction with continued direct action, Tsuru for Solidarity has launched an online campaign, targeting the governors of Texas and Pennsylvania, called #FreeMyFriends.

The campaign incorporates images of Mawon and the Daruma that children and families can download, color and post on social media. The campaign is available on the Tsuru for Solidarity website and social media outlets.

The Daruma, a doll that represents Bodhidharma, is seen as a symbol of perseverance and hope and, during the Edo period, was also used as a healing talisman to protect children from epidemic disease.

In all of this work, Japanese Americans are beginning to find a path that allows us to understand and reconcile our history as we reach out in support of other communities.

We are beginning to have important conversations and reflection on our own role in the move toward proximity to white power. In addition, we are renewing our resistance to racism and state violence while also exploring and facilitating healing practices that are helping us process the intergenerational trauma caused by our community’s experience in the camps during WWII. 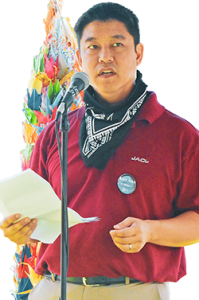 In the past week, we offered the first of four Zoom webinars called “Tsuru Rising: Community Conversations.” The first webinar focused on Japanese American identity and intergenerational trauma. Future webinars will explore issues of policing, detention and surveillance of communities of color; U.S. patterns of forced removal and mass incarceration and the Japanese American relationship to settler colonialism; and a community forum on anti-Blackness in the Japanese American community.

Meanwhile, we continue to build coalitions and stand in solidarity with directly impacted communities at detention sites across the country. We are also developing new initiatives for the fall and 2021.

Please visit our website, where you can sign up to receive updates, participate in online actions and get connected to a chapter nearest you.

The movement is just beginning, and we welcome you to join us.