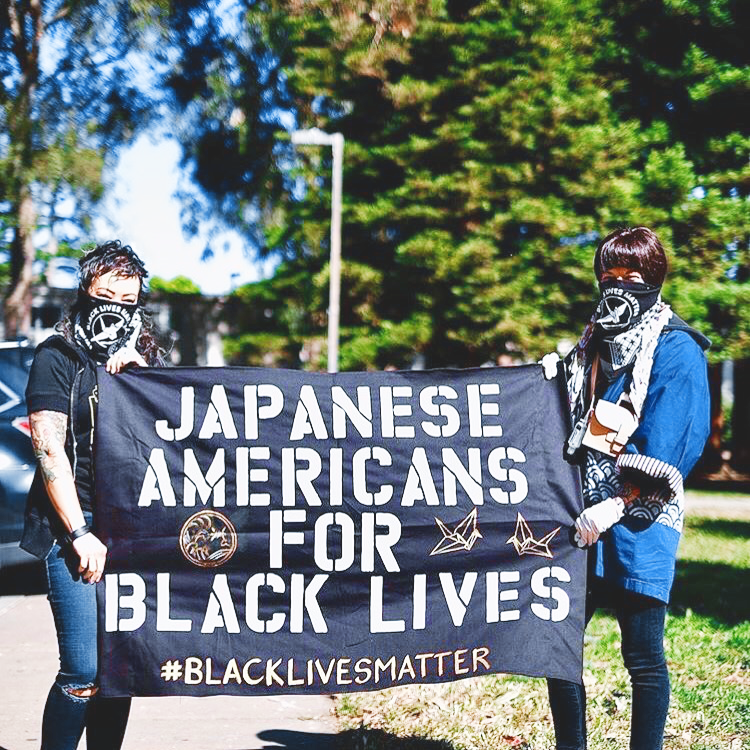 Japanese Americans come out against racism and state violence.

On a cool and breezy Sunday morning, survivors of the World War II American concentration camps walked onto a desolate and empty mall on June 7, traversing the unusually quiet landscape of the boarded up Tanforan Mall, which was shut down due to fears of protesters.

This small group was on its way to the Tanforan Assembly Center Memorial Plaque, knowing full well that they could be hassled by mall security and police. Yet, they marched on undeterred with a mission.

They made their way lead by Rev. Ronald Kobata of the Buddhist Church of San Francisco, who conducted a ceremony to honor those who were imprisoned at the site, as well as those who died there. During the ceremony, Rev. Kobata also explained that the burning of incense was a symbol of “clearing away of the obstructions that we create in our heads that separates us,” a perfect start to the upcoming rally at nearby Orange Memorial Park, where people were gathering in a show of unity and defiance to the status quo, the continued inaction and silence by far too many, for far too long.

Like the pent up anger and defiance to institutional and systemic racism that led to the nationwide reaction to the recent murders of George Floyd, Brionna Taylor and Ahmaud Arbery, the inhumane treatment of immigrant families especially during a pandemic and renewed racist attacks on Asian Americans, the quiet Sunday morning in San Bruno exploded into the beat of drums by Bakuhatsu Taiko Dan from the University of California, Davis, at the Tsuru

Rising rally that drew a crowd of more than 100 attendees. Protesters could be seen wearing masks with messages of unity and support for Black Lives Matter. Many carried signs of support for immigrants and Black lives.

Members of the organizing groups carried giant cranes and banners with two clear messages — Japanese Americans support Black Lives and a demand that the current U.S. concentration camps be shut down. 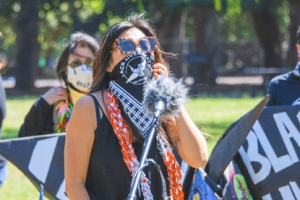 Kim Miyoshi with Japanese Americans for Justice, one of the event’s main organizers, delivered a powerful and emotional message tying the history of past racism toward the Japanese American community and how many fell into a myth.

“So we took shelter in and allied ourselves to ‘Whiteness’ thinking that would keep us safe,” she said. “We were fed a model minority myth to believe basic human rights and dignity — must be earned … it was a lie … our act of gathering here today is an act of defiance … it is an homage to the Issei, Nisei and Sansei whose suffering and sacrifice paved the way … it is an EFF YOU to the racism that didn’t want us to see this day … but we are here.”

Miyoshi concluded her riveting speech by saying, “Our hearts beat today as one drumbeat. We dance as one community for all the stolen lives. We lift our tsuru wings with the names of all those who passed. And TOGETHER we RISE.”

Agreeing with Miyoshi’s message, Satsuki Ina, who also is a co-founder of Tsuru for Solidarity, observed: “We have so many missions forcing us to create coalitions with so many groups. If we are not united, we will not win the battle — together we rise.” 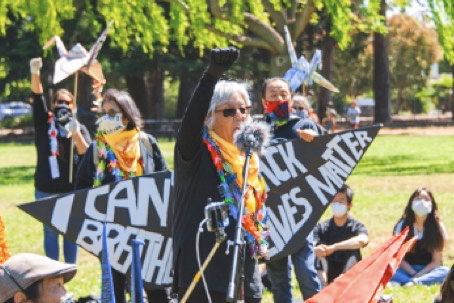 Dr. Satsuki Ina told the crowd that “if we are not united, we will not win the battle — together we rise.” (Photo: Josh Kaizuka/John Ota)

A surprising moment came as Kiyoshi Ina talked about how he was at Tanforan in 1942 “in my mother’s womb, she was two months pregnant with me.” Kiyoshi Ina became emotional as he talked about how his father and mother were forced into the horse stalls and while other expecting mothers miscarried, his mother remained strong, and the government was not going to take her child away.

He also talked about how African Americans were originally brought into this country as slaves. Other people of color were welcome when there was a need for manual labor. Kiyoshi Ina continued that “throughout history, people of color suffered from the White man. … Wake up America, we can’t exist like this,” and in what can only be described as a Superman moment, he started taking his Tsuru for Solidarity shirt off as attendees appeared stunned at what was happening.

It turns out that Kiyoshi Ina had a Black Lives Matter supershirt on underneath with support for groups including trans, queer, immigrants, disabled and incarcerated people.

Other speakers echoed the call to join with Black Lives Matter and help end ICE Detention facilities. And Chizu Omori said that the current administration “unleashed a wave of hatred on us by calling COVID-19 the ‘Chinese virus.’ ”

Omori went on to say that the president has “tacitly approved brutality and aggressiveness by police resulting in the death of George Floyd. … We join with Black Lives Matter to call for justice in our land.”

Currently, the Bay Area and Sacramento Tsuru for Solidarity regions are also focusing on shutting down the ICE Detention Facility in Yuba County. During the gathering, a letter by Juan Jose Erazo Herrera was read by Robin Goka Huynh with San Jose Nikkei Resisters.

Herrera is an unaccompanied minor who came to the U.S. as a survivor of violence in El Salvador. He has a compromised immune system due to the violence perpetrated on him and has been in detention for more than two years. He is on a hunger strike in Yuba County as he continues to fight for better conditions for not only himself but other ICE detainees in Yuba County and in solidarity with those in other detention facilities, including Mesa Verde.

Then, everyone gathered around at a safe distance while Gregory Wada with Bakuhatsu Taiko Dan explained the “ei ja nai ka” song and dance. As Wada explained, it expresses Japanese American ethnic identity honoring and celebrating the immigrants with motions relating to farm and railroad laborers.

Miya Sommers with Nikkei Resisters led some chants to close out the park portion of the action. Sommers asked people to take a knee as a form of “protest and a way of connecting everyone to the land, connecting to each other, connecting to this moment … to remember all the lives lost to state violence, White supremacy and a commitment to change.”

As people knelt, Sommers talked about how it was a commitment to change. “Together we are in this fight for the long haul,” she said.

The Tanforan event ended with a car rally looping around the Tanforan Mall, drivers honking their horns and using their cars — decorated with signs and posters — as a call to action. No one was stopped or cited by the police.

The Tsuru Rising! Vigil at Tanforan was organized by Japanese Americans for Justice, San Jose Nikkei Resisters, Nikkei Resisters, Florin JACL-SV, Bakuhatsu Taiko Dan and the Bay Area and Sacramento Tsuru for Solidarity hubs, and supported by the Berkeley JACL and Buddhist Church of San Francisco. 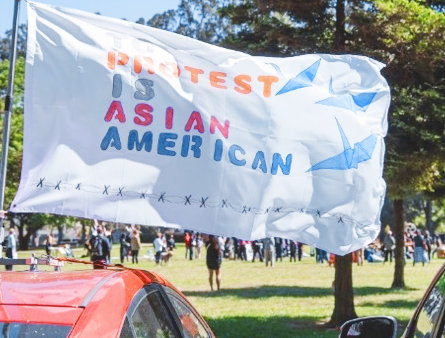