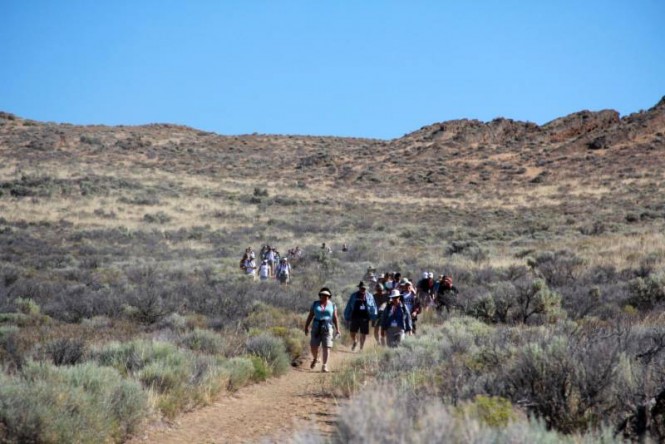 This year’s theme, ‘Criminalizing Dissent: The Tule Lake Jail,” focuses on lifting the stigma and validating the experience of those who dissented during WWII.

The Tule Lake Committee hosted the biennial four-day pilgrimage over the July 4 holiday weekend to connect pilgrims with the historic Tule Lake Segregation Center and its turbulent and complicated history.

More than 350 participants came from all across the United States and Japan to take part in the journey. Departing from West Coast cities including Berkeley, Eugene, Olympia, Portland, San Francisco, San Jose, Seattle and Union City, they traveled by bus, which is an integral part of the pilgrimage, as it allows the pilgrims to create a community that reflects on the experience of those who were forced from their homes on the West Coast in 1942 and imprisoned in 10 War Relocation Authority camps and other detention facilities in remote areas all over the U.S., including Tule Lake.

This year’s theme was “Criminalizing Dissent: The Tule Lake Jail.” According to the TLC, the focus was on segregation and the 12,000 dissidents who were branded as “disloyal” and imprisoned at the maximum-security Tule Lake Segregation Center.

Dissent became a crime that led to a lifetime of stigma, a stigma that, to this day, is still felt within the community.

The goal of the Tule Lake Pilgrimage was to lift that stigma, validate the experience of those who dissented and create an environment where understanding, acceptance and healing can take place.

The program was packed full of activities and sessions. There were viewings of documentaries including “Cats of Mirikitani,” “From a Silk Cocoon,” “Jimmy Murakami: Non Alien” and “A Flicker in Eternity.”

Many participants also took part in the Castle Rock hike; this year, the oldest person to make it to the summit was 84 years old, a mere teenager when incarcerated at Tule Lake.

The TLC and the National Park Service worked together to offer participants two separate options for tours of the historic site.

At the jail, pilgrims were greeted by Jimi Yamaichi, who spoke about the Army stockade and the jail’s construction.

At Camp Tulelake, the Tanimoto brothers recalled their detention after their housing block protested the loyalty questionnaire.

The other tour was collaboratively conducted by Cultural Resource Manager Jessica Middleton and TLC’s Barbara Takei, and it focused on historic use, significance and potential future uses for the National Historical Landmark area and its existing structures, including the carpenter shop, stockade and two motor pool buildings.

At the invitation of the TLC, members of the local community also attended activities at the Tulelake-Butte Valley Fairgrounds and the Tule Lake Pilgrimage cultural program at the Ross Ragland Theater in Klamath Falls, Ore.

This year’s keynote speaker was Wayne Merrill Collins, son of the late Wayne Mortimer Collins, who is revered among Tule Lake’s segregants as a passionate defender of Japanese American civil rights.

Collins spoke of the government’s forced removal and wartime incarceration program as a source of duress that led thousands of U.S. citizens to give up their citizenship and of his father’s 20-year fight to help thousands of Japanese Americans reverse the damage done to them by this unprecedented denationalization and deportation program.

This year’s Tule Lake Pilgrimage was a powerful and healing event, one that allowed those who gathered to reflect on the injustice of the wartime incarceration as well as honor those individuals who suffered a lifetime of humiliation and stigma.

The Tule Lake Unit is open year round and offers tours on Saturdays in the summer.