The original program was created by the Twin Cities PBS as part of its ‘Minnesota Experience’ series.

The JACL Twin Cities chapter has collaborated on an original documentary titled “Armed With Language,” which honors the critical role played by Nisei who trained in Minnesota at Camp Savage and Fort Snelling during World War II. The film was created by the Twin Cities PBS (TPT) as part of its “Minnesota Experience” series. 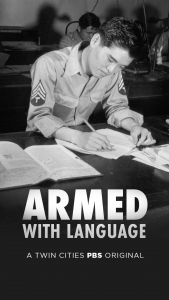 The original documentary “Armed With Language” honors the critical role played by Nisei who trained in Minnesota during World War II.

In May 1942, the highly classified Military Intelligence Service Language School was relocated from the Presidio of San Francisco to the Minneapolis/St. Paul area. More than 6,000 Nisei men and women received accelerated and intensive training as translators, interrogators and Japanese military specialists.

David Mura, a local writer, playwright and actor, narrated the documentary, and other members of the Twin Cities JACL helped to bring the stories of courage and sacrifice to life.

Karen Tanaka Lucas shared recollections about her father’s training and service in the MIS during and following WWII. Walter Tanaka was selected for the first class of MIS students to train at Camp Savage, Minn., in May 1942. Upon graduation from the MIS Language School, Tanaka was sent to the Pacific Theater, where he interrogated Japanese POWs from 1943 until the end of the war, served as a linguist and interpreter during war crime trials interviewing high-ranking Japanese military leaders in post-war Japan and played a vital link between the Japanese populace and U.S. occupation forces.

Peggy Doi recounted the experiences of her father, Bill Doi, who volunteered for the MIS while he was incarcerated at Tule Lake, along with 34 fellow incarcerees. In addition, Sally Sudo talked about her brother, Joe Ohno, who served in the MIS while she and the rest of her family were incarcerated at Minidoka, Idaho. Kimmy Tanaka, site supervisor of Historic Fort Snelling at Bdote, discussed the historical significance of the MIS.

Also featured is James C. McNaughton, author of “Nisei Linguists: Japanese Americans in the Military Intelligence Service During World War II.” McNaughton provided the background and context for the development of the MIS, as well as recruitment and training of Nisei soldiers at the top-secret school.

The success of the Nisei who served in the highly classified MIS was not publicly known until after the records were released almost 30 years later with the Freedom of Information Act in 1972.

But the attachments of the MIS soldiers to the various units were, in some cases, not documented, so their courage and sacrifices will never be fully known.

In addition, Gen. Douglas MacArthur acknowledged that because of the MIS, “Never in military history did an army know as much about the enemy prior to actual engagement.”

The hourlong documentary premiered in the Twin Cities on May 17. Other PBS-affiliated stations will broadcast the film. Check your local listings for more information. The film can also be streamed online at www.tpt.org.