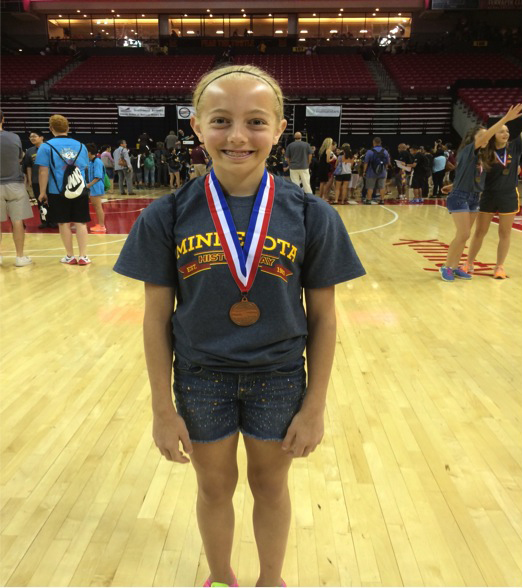 Seventh-grader Mary Jo Dalsin from New Prague, Minn., at the National History Day Competition in Washington, D.C., with her third-place medal in the junior individual documentary division for her video “Japanese Internment: Rights, Responsibilities and Reparations.” Photo by Emily Dalsin

Every year, the Twin Cities JACL Education Committee receives requests from students who are participating in the National History Day competition. The requests include using resource materials from the chapter’s extensive collection, oral history interviews or advice and feedback on their projects.

This year’s theme was “Rights and Responsibilities in History.” Approximately 600,000 students, ranging from sixth-12th grade from across the United States, America Samoa, Guam, international schools and Department of Defense Schools in Europe and Asia participated in the competition.

Over the past several years, the Twin Cities JACL has had students win awards at the local, regional and state level, but not until this year has a student received an award at the national competition held in Washington, D.C.

“It is always interesting to see how students are able to incorporate the Japanese American World War II experience into the History Day Theme,” said Sudo. “The TC JACL heartily congratulates Mary Jo for her efforts and fine work.”

Dalsin’s mother, Emily, describes her experience during the national competition as follows:

“Each student is given a 20-minute timeslot for presenting his/her project. Documentary students begin their presentation by giving each of the three judges a 500-word essay on their topic and an annotated bibliography. The judges read the written information and then the student plays his/her 10-minute documentary. After the documentary ends, the judges interview the student. The interview/question portion of the program takes about five to seven minutes, during which the student is quizzed on many aspects of the project. During the interview, MJ (Mary Jo) was eloquent and educated. She answered the judges’ questions thoughtfully and with poise. We had been working with her all week to get her ready for the interview portion of the competition. I thought I had come up with every possible question, but I was wrong. At the end, one judge asked, ‘Where do you(ITAL) come down on this issue? How should(ITAL) the line between government responsibility for national security and citizens’ rights be drawn?’ My heart started beating a mile a minute. I didn’t know if MJ had ever considered how she(ITAL) felt about this issue. She knew how others felt . . . but had she ever considered her own opinion? When she spoke, I almost fell over. She was clear, articulate and thoughtful. She could have been a college freshman, not a 12-year-old little girl as she spoke to her judges. I was beyond impressed! At that moment, I understood the strength of the NHD program. My kid was the expert, and she was telling a story that she knew inside and out. She kept the judges’ attention and provided details that I didn’t know she knew. I was so proud!” said Emily Dalsin.