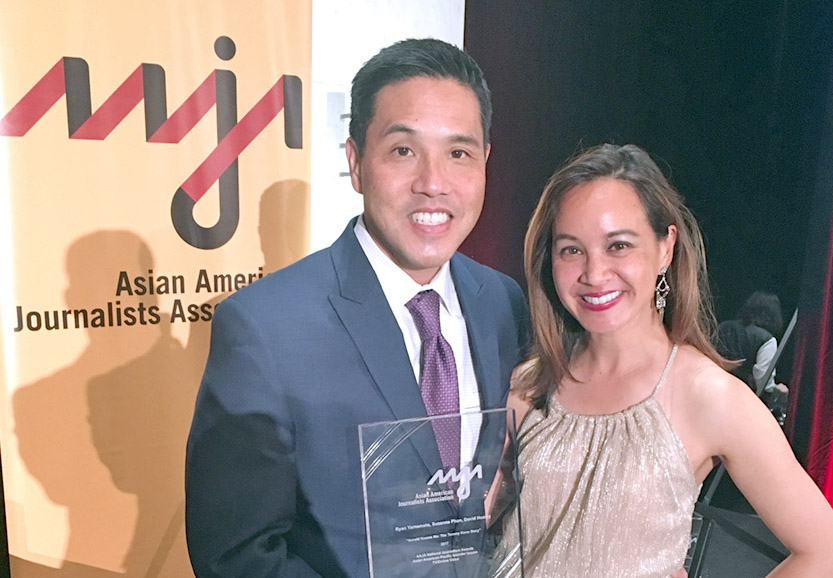 Director Ryan Yamamoto and producer Suzanne Phan were honored by the AAJA for their work on the documentary “Arnold Knows Me: The Tommy Kono Story.” (Photo: David Hosley) 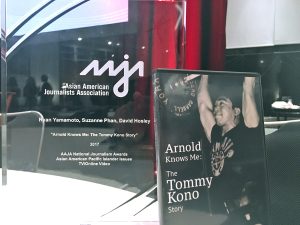 Above: The DVD case for “Arnold Knows Me: The Tommy Kono” story. (Photo: David Hosley)

Director Yamamoto and producer Pham were honored for their work on the documentary “Arnold Knows Me: The Tommy Kono Story,” which depicts the Olympic hero at the peak of his powers at the Helsinki, Melbourne and Rome Summer Games.

Yamamoto is morning anchor at KOMO-TV in Seattle, and Phan reports from the field for the station’s newscasts. Both are members of the Seattle AAJA chapter.

Public TV stations originally broadcast “Arnold Knows Me” leading up to the Summer Olympics in Brazil last year.  It continues to be shown on television and at community events.

Kono and his family were incarcerated at the Tule Lake Relocation Center during World War II. The mountain air cleared up Kono’s health problems, and a group of older teens got him interested in weightlifting.

When he came home after the war, Kono was passionate about the sport and started to win local competitions. But he was drafted into the U.S. Army during the Korean War and was trained to be a cook.

While waiting to be shipped out to Asia, his talents were recognized, and he instead was put into an Olympic training program in advance of the 1952 Olympics in Helsinki. 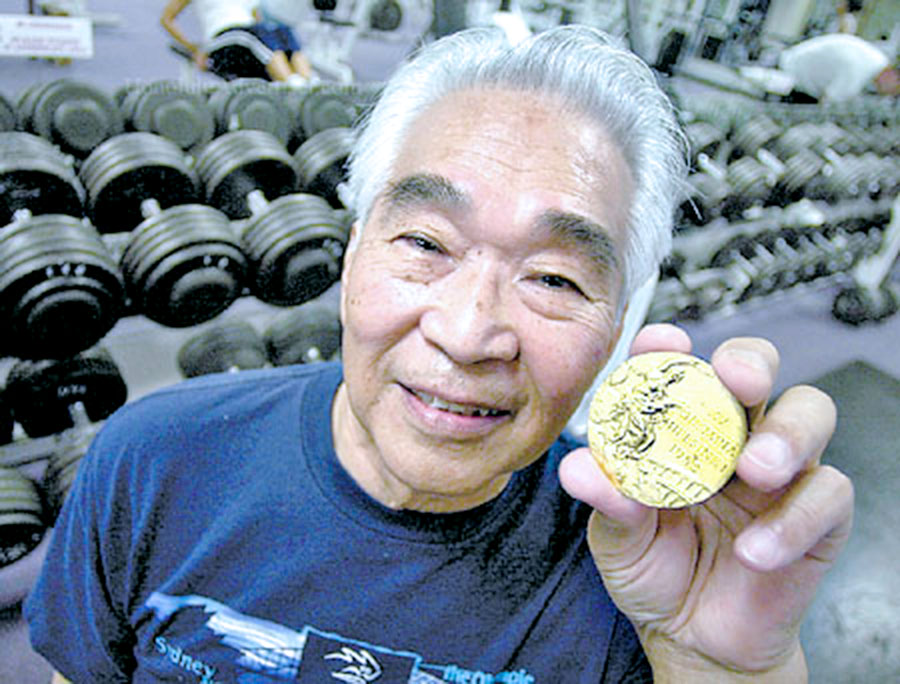 Tommy Kono displays one of his two Olympic gold medals he won for weightlifting. (AP photo)

Surprisingly, Kono won a gold medal, and he did it again in 1956 in Melbourne. He then competed in the 1960 Olympics in Rome for an extraordinary third time, earning a silver medal.

As a teenager, Schwarzenegger watched Kono compete in Europe, and he became such a fan that he had a photo of Kono placed on his bedroom wall. Shortly thereafter, Schwarzenegger followed his idol’s path to international fame.

Kono noted that people asked him if he knew Schwarzenegger.

“Do I know Arnold?” he recalled in the documentary, to which he replied, “Arnold knows me!”

“It’s been great to have a project where we could really dive in,” said Phan. “As TV news reporters, we typically produce stories that are 60-90 seconds long. To have a project that we are passionate about, could devote a substantial amount of energy to producing and sharing is truly exciting.”

Phan and Yamamoto produced the program while working full-time for ABC10 in Sacramento.

David Hosley, who is an executive producer on the project, shared in the AAJA recognition.

“This was an idea that Ryan had, and it started out as a local story,” said Hosley. “To have it go national on public television and receive AAJA’s top award really exceeds all of our expectations. It’s a testament to the amazing life that Tommy Kono lived. He is one of America’s greatest Olympic champions.”

Kono passed away in Honolulu last year at 85 years of age, but in addition to all his Olympic medals, his legacy includes coaching Olympic athletes here and abroad and authoring several books on lifting techniques. There is also an annual weightlifting competition in Sacramento named in Kono’s honor.