Rangers, Yankees and Twins can offer the most to the Japanese star, who will be eligible to play in the major leagues next season. 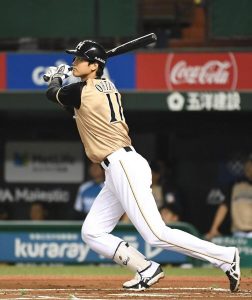 “The other day, I met with team officials and stated my intentions,” Ohtani said at a news conference. “My request was met with warm words of support, so I hope to do my best in America from next year on.”

“Everyone in our ball club accepts his thoughts,” Fighters manager Hideki Kuriyama said Nov. 10. “It’s not just me but everyone in our organization believes in what he can do.”

Because Ohtani has less than nine years of service time, Nippon Ham retains his rights, and he must go through the posting system to leave.

The Texas Rangers, New York Yankees and Minnesota Twins can pay the most to a young international amateur free agent as highly touted Nippon Ham Fighters pitcher-outfielder Ohtani prepares to enter the market, and Major League Baseball and its Japanese counterpart have agreed to the outlines of a deal to keep the old posting system for this offseason.

The Rangers can agree to a maximum $3.5 million signing bonus from their pool that covers July 2 through next June 15, according to figures compiled by Major League Baseball and obtained by the Associated Press. New York can pay $3.25 million, and the Twins $3.24 million.

Each team started with a pool of $4.75 million, $5.25 million or $5.75 million, and amounts could be traded. Most of the pool money already has been spent on Latin American prospects.

Under baseball’s new collective bargaining agreement, the 23-year-old Ohtani can only agree to a minor league contract that is subject to signing bonus pools. If added to a big league roster, he would have a salary for about the minimum $545,000 next season and not be eligible for salary arbitration until 2020 at the earliest.

If he waits until he is 25 to enter the MLB, there would be no restrictions, and Ohtani would likely get a deal for more than $100 million. MLB has warned of severe penalties if a team attempts to sign Ohtani to a secret long-term contract, then announce it in future years.

While the posting agreement between MLB and Nippon Professional Baseball has expired, the sides agreed several weeks ago to the outlines of a deal that would for this offseason continue the rules of the previous agreement, a person familiar with that negotiation said.

The rules call for the Japanese club to set a maximum $20 million posting fee, and any MLB club willing to bid that amount would be able to negotiate with Ohtani for 30 days.

Starting next offseason, the fee would be 15 percent of the guarantee of a major league contract and 20 percent of the signing bonus if a player is subject to bonus pools, the person said. MLB is waiting for the Players’ Association to approve the agreement before submitting it to MLB owners for their ratification, the person said.

Ohtani is the reigning Pacific League MVP and is 3-2 with a 3.20 ERA this year for the Nippon Ham Fighters, limited because of thigh and ankle injuries. He is batting .332 in 65 games with 16 doubles, eight homers and 31 RBIs.

“I am not a complete player yet, and I want to go to an environment where I can continue to get better,” Ohtani said. “I felt the same way when I graduated from high school. And it is my strongest reason for wanting to go now.”

Ohtani considered going straight to the MLB out of high school but was persuaded to sign with the Fighters, who assured him that he could play the outfield as well as pitch.

He said in the news conference that he hoped to continue batting and pitching.

“Just before I turned professional, I didn’t imagine I would be able to do both,” Ohtani said. “But since then, the fans have encouraged it.”

He added that Kuriyama and his coaches had helped make the dual role possible.

“That has left me with a strong desire to keep doing it, not only for me but for them,” he said. “I don’t know if it will be possible, but I want to hear what teams over there (U.S.) have to say and what kind of situations might be available. Until that process has started, I can’t say how it might work out.”