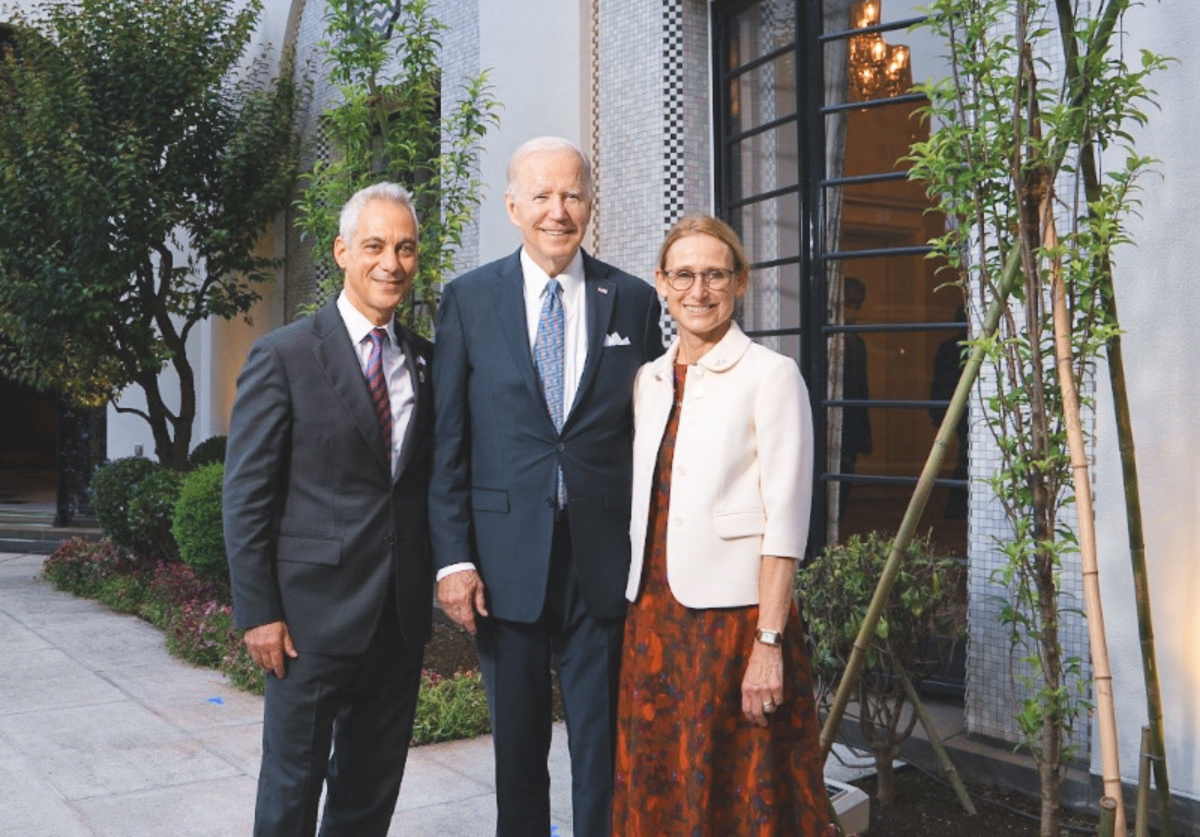 President Joe Biden (center) met with U.S. Ambassador to Japan Rahm Emanuel and his wife, Ann Rule, during his first visit to Japan as president. Ambassador Emanuel then dedicated the Norman Yoshio Mineta Room in the official residence of the ambassador to Japan in honor of the contributions Japanese Americans have made toward strengthening U.S.-Japan relations. (Photo: courtesy of the U.S. Embassy in Tokyo)

With the president in attendance, Ambassador Rahm Emanuel’s designation highlights the many contributions the late-Norman Y. Mineta and other Japanese Americans have made to strengthening the U.S.-Japan relationship.

President Joseph R. Biden’s first stop on his visit to Japan on May 22 was at the historic U.S. Ambassador’s residence in Tokyo. Ambassador Rahm Emanuel and his wife, Ann Rule, personally welcomed the president to their home.

On the importance of the president’s visit to the residence, Ambassador Emanuel stated, “It is an honor to welcome my dear friend, President Joe Biden, to the residence on his first visit to Japan as president. I have known the president for more than two decades, and now welcoming him as president is deeply meaningful to me. On a fundamental level, this visit is about strengthening the U.S.-Japan Alliance as we advance the relationship from alliance protection to alliance projection in the Indo-Pacific. In addition, it is also about deepening the personal friendship and bond between the president and prime minister (Fumio Kishida).”

With President Biden in attendance, Ambassador Emanuel dedicated the residence’s Norman Yoshio Mineta Room to highlight the many contributions Japanese Americans have made to strengthening the U.S.-Japan relationship. Mineta, the former U.S. Transportation Secretary and first Asian American Cabinet member, died on May 3 at age 90.

At the dedication, Ambassador Emanuel reflected on Mineta’s career in public service: “He had a distinction as one of the first Japanese American mayors, but also, as a testament to his integrity and character, he served two presidents of both parties as part of their cabinets. Norm Mineta and I worked together when I was a freshman Congressman, and he was Secretary of Transportation. He helped me secure modernization of Chicago’s public transportation Brown Line.”

A dedication certificate from President Biden reads: “Norman Yoshio Mineta was a strong supporter of the United States-Japan bilateral relationship and a leader in the Japanese American community. 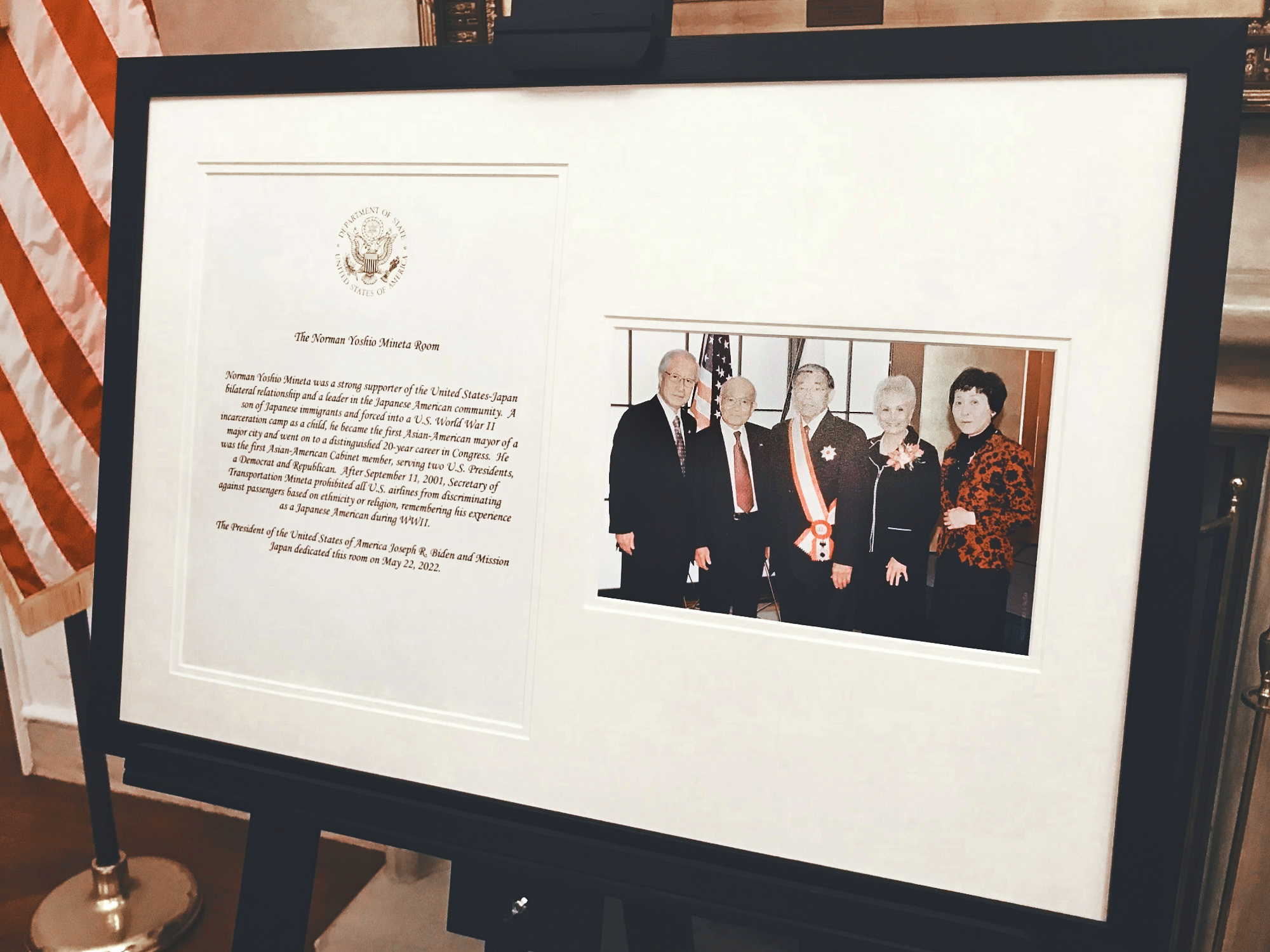 “After Sept. 11, 2001, Secretary of Transportation Mineta prohibited all U.S. airlines from discriminating against passengers based on ethnicity or religion, remembering his experience as a Japanese American during WWII. The President of the United States of America Joseph R. Biden and Mission Japan dedicated this room on May 22, 2022.”

In honor of the president’s visit, Ambassador Emanuel and Rule also dedicated two Delaware Peach Blossom trees and an American Holly tree in the residence garden, along with a commemorative plaque.

Ambassador Emanuel explained the planting’s significance: “Given the president’s visit to Japan at this critical juncture, the Delaware Peach Blossoms and American Holly dedicated today will become part of the great bipartisan commitment to the U.S.-Japan Alliance.

As the Peach Blossom and Holly deepen their roots, they will also serve as a symbol of the United States and Japan’s deepening relationship.”

Some of the other dedications over the past 70 years include the 1958 planting of dogwood trees as a living memorial to Japanese statesman Yukio Ozaki and a memorial plaque for Sen. Daniel K. Inouye (2013).