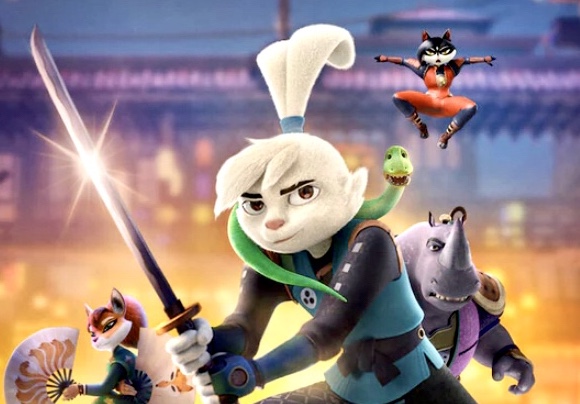 “Usagi Yojimbo” creator Stan Sakai has hopped from the printed page to Netflix with the streaming series “Samurai Rabbit: The Usagi Chronicles,” above.

If you come across “Samurai Rabbit: The Usagi Chronicles” on Netflix, you may be in for a surprise. It’s an animated series about a rebellious teenager and his group of friends and their adventures saving the city from … yokai.

Yep, yokai. Japanese ghost-spirits, most of them malevolent and dangerous. They’re running (or floating) amok in the city of Neo-Edo, possessing people and things and causing a lot of havoc. 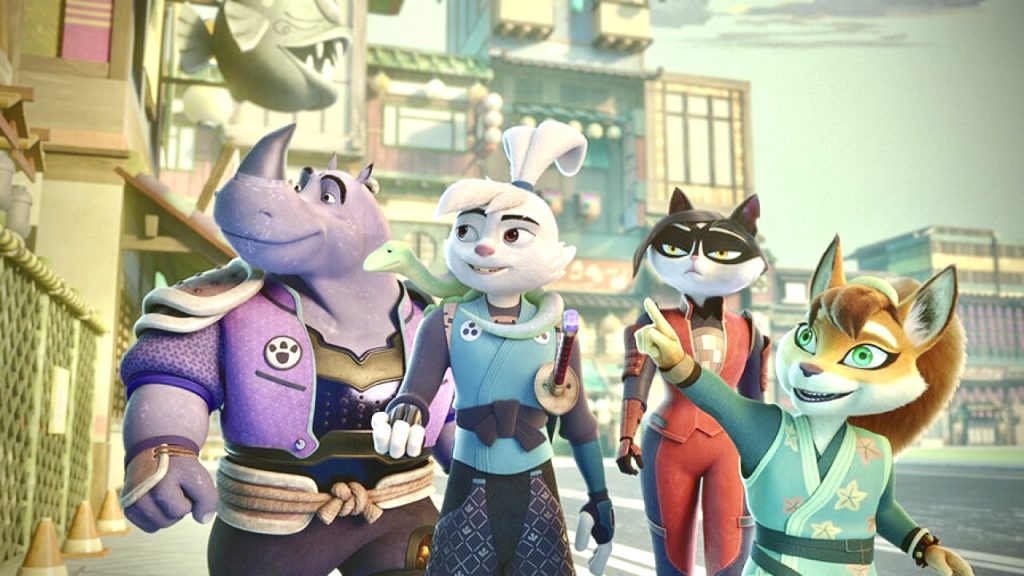 In “Samurai Rabbit,” Yuichi fights off malevolent ghost-spirits with the help of his martial arts-fighting friends: Spot, Kitsune, Chizu and Gen the rhinoceros. (Photo: Netflix)

The teenagers fighting the yokai are all martial arts-fighting animals: The titular samurai is, as the name says, a rabbit, Yuichi Miyamoto, who’s accompanied by Spot, his tokage, or pet dinosaur-lizard (Yuichi and Spot — who doesn’t really speak, just squeals — are both voiced by Japanese American actor Darren Barnet). His posse of ghostbusters includes Kitsune, a fox (voiced by Shelley Rabara); Chizu, a cat who was raised by the evil Neko Ninja crew (Mallory Low); Gen the rhinoceros (Aleks Le); and Tetsujin the bear (Keone Young), who is the Buddhist priest guarding the magical Ki-Stone crystal.

The series, which made its debut on Netflix on April 28, is a breathless, exciting, funny and action-packed samurai story, set not in the feudal Japan of the past, but of the future, where Neo-Edo is built like a traditional Japanese town but with neon and floating space vehicles, and the teenagers who star in the series stop to strike a pose and take selfies. The computer graphic animation is top-notch, and many of the characters and much of the scenes look almost photographic … except, of course, the characters are talking animals in samurai gear. 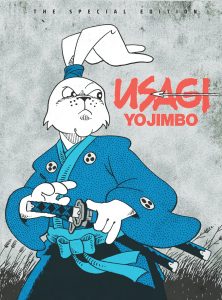 Stan Sakai has been illustrating and writing about the character “Usagi Yojimbo” for nearly 40 years. (Photo: Stan Sakai/Instagram)

The story follows Yuichi, who is the descendant of Miyamoto Usagi, a samurai warrior from the 1600s, who desperately wants to become a famous samurai himself. The series intercuts scenes of Miyamoto fighting yokai, and Yuichi imagines himself doing the same.

But when he meets his new companions and ends up at the temple that houses the Ki-Stone, he inadvertently releases the yokai, who’ve been imprisoned inside it for centuries. The main yokai that escapes, Kagehito, mistakes Yuichi for his ancestor, who imprisoned the yokai in the first place.

Yuichi and his friends are fun characters, and the series draws in viewers with its humor and action. But “Samurai Rabbit” also manages to be engaging by paying accurate tribute to historical Japanese culture — down to the use of Japanese words without pandering to audiences by explaining every word and phrase.

So, yokai are introduced right away, but anyone watching picks up the meaning of the word by, well, watching. Spot is called Tokage, the word for “lizard” without explanation. Yuichi yells ikuzo! – the word for “let’s go!” before leaping into a fight. Even set props in the background, like the shoji paper screens, are referred by their Japanese names. Watching the series, even though it’s a sci-fi fantasy set in the 26th century, is a lesson in Japanese culture, traditions and language.

The series is true to the culture and history of Japan, including the historical elements, even though it takes place in the future because it’s anchored in actual Japanese history.

And it’s completely on purpose, explains Stan Sakai, the creator and an executive producer of the series.

“You can see I have [Japanese] machines in there, you know, like, there is a pachinko or one of those game centers, and all the houses have this Japanese motif,” he noted. “It’s sort of very traditional, and when you get to Neo Edo, the adventures take place with more futuristic architecture, but it’s built around the old traditional Japanese homes with the, you know, the sloping roofs and everything.”

Sakai is the mastermind behind the series. “Samurai Rabbit” is the latest entry in a media empire that was started as a tribute to the classic samurai tales of old Japan that were memorialized in the films of director Akira Kurosawa and actor Toshiro Mifune. Those inspirations evolved into “Usagi Yojimbo,” a comic book series launched in 1984 by Sakai, a Kyoto-born, Hawaii-raised Japanese American artist.

Sakai had envisioned a comic book that was based on the movies he loved, like the 1961 “Yojimbo,” starring Mifune as a ronin, or a masterless samurai, who is a bodyguard for hire (yojimbo means “bodyguard”). Mifune also starred in the “Samurai Trilogy” of films in the 1950s directed by Hiroshi Inagaki, as Musashi Miyamoto, a legendary (real) samurai who was a philosopher and a ronin made famous for fighting with two swords, one in each hand.

Generations of Japanese Americans have grown up watching “chanbara,” or samurai sword-fighting movies for Saturday matinees, on late-night TV or on VHS, DVDs or now Blu-ray discs. Sakai was a fan from childhood, and when he was pondering the idea of drawing a comic book based on the samurai he loved so much, he was doodling and came up with the idea of a rabbit with his ears tied in a top-knot, samurai-style. 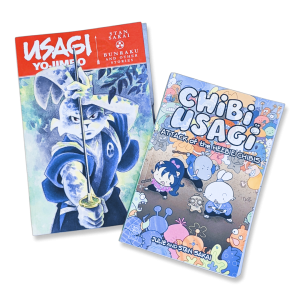 So, instead of human samurai, he turned the characters into anthropomorphized warriors and gave Usagi Yojimbo, the ronin rabbit bodyguard, the name Miyamoto Usagi in tribute to his early influences.

The character has been durable in various comic book series written and drawn by Sakai for almost 40 years now, but Miyamoto Usagi has also been a “guest star” on several episodes of the Teenage Mutant Ninja Turtles franchise, a good anthropomorphic fit.

There were even Usagi Ninja Turtles action figures produced. Sakai has licensed Usagi role-playing games and has inspired two video games. “Usagi Yojimbo” has won a handful or awards over the years, and in 2011, the Japanese American National Museum in Los Angeles organized a “Year of the Rabbit: Stan Sakai’s Usagi Yojimbo” exhibit. 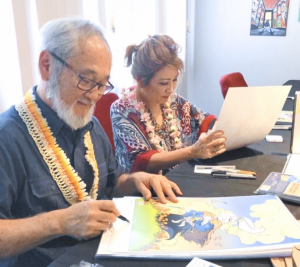 Stan Sakai and his wife, Julie, together call themselves JUST and have produced the graphic novel “Chibi Usagi: Attack of the Heebie Chibis.” (Photos: Stan Sakai/Instagram)

But wait — there’s more! Sakai has collaborated with his wife, Julie, an artist in her own right, and the dynamic duo call themselves JUST, and they’ve produced “Chibi Usagi: Attack of the Heebie Chibis,” an adorable graphic novel aimed at inspiring young readers to learn about traditional Japanese history and culture. You can even order a “Kawaii bundle” from the StanSakai.com website that includes an “Usagi Yojimbo” coloring book, the “Chibi Usagi” graphic novel and a cute Chibi Usagi plush toy.

Sakai keeps busy, but he can concentrate on his core Usagi Yojimbo character and story lines because all of this rampant creativity is managed as a family business.

“Julie takes care of all the business things,” Sakai said. And his step-son, Daniel Fujii, “takes care of negotiations and also dealing with clients and such, new projects. Like there would not be a TV series or streaming series with Netflix if it was not for Daniel.”

It’s a mom-and-pop shop and more, with a son added. “Very much,” Sakai said. “Each one of us has our own business, too. Daniel also does licensing for other people. And Julie has her own art business as well.” 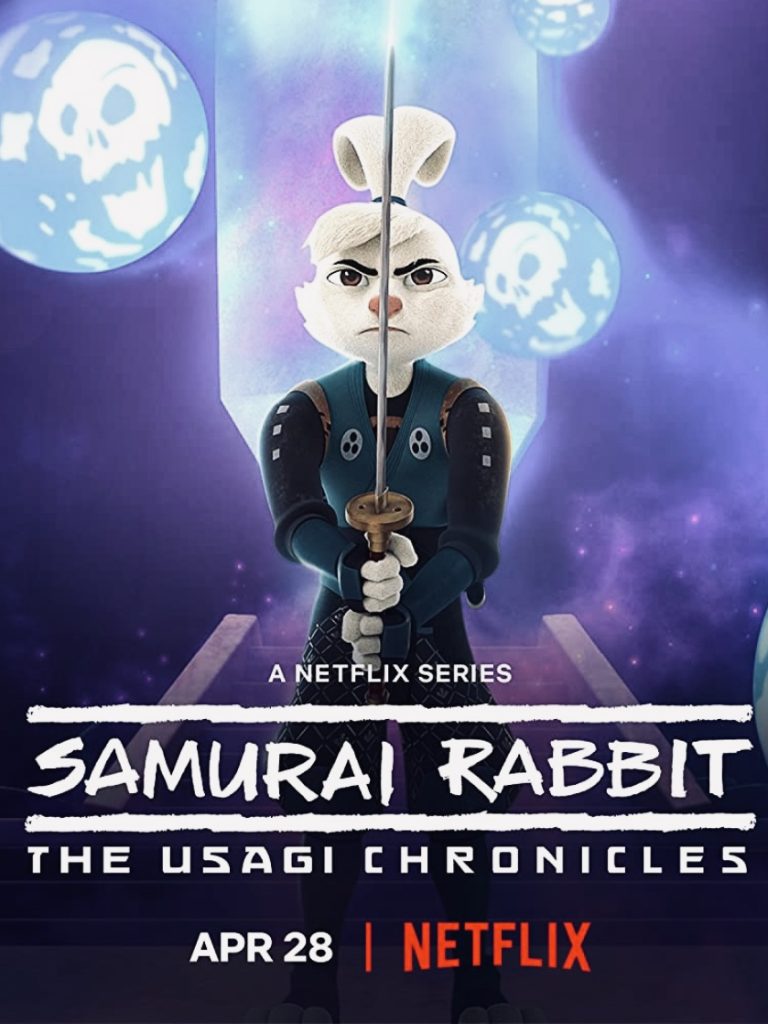 Now that the business has diversified, as they say in the business world, Sakai watches over more, but he also has the ability to think even more deeply about the stories he wants to tell in all formats, whether it’s comics or animation.

“You know, when I first started, I was concerned with what do I do next month? Now, I’m laying the foundations for stories that would take about another 10 years,” Sakai said. “It’s like, one story I did called ‘The Hidden’ about the hidden Christians in Japan. I was laying down the foundations for that about eight years before I actually wrote that story. And the same with ‘Grasscutter.’ It’s probably one of my most acclaimed stories — it won an Eisner Award, it was used as a textbook in Japanese history classes on the college level. And, you know, it’s received a number of awards, including the American Library Association Award, and that took about five years just to do the research.”

Because Sakai is so deeply rooted in Japanese culture, it’s easy to assume he has lived a good deal of his life in Japan. But his family moved from Kyoto to Hawaii when he was just 2 years old. So, he simply immerses himself in research to be able to depict the culture that is such a foundation of his entire Usagi catalog. 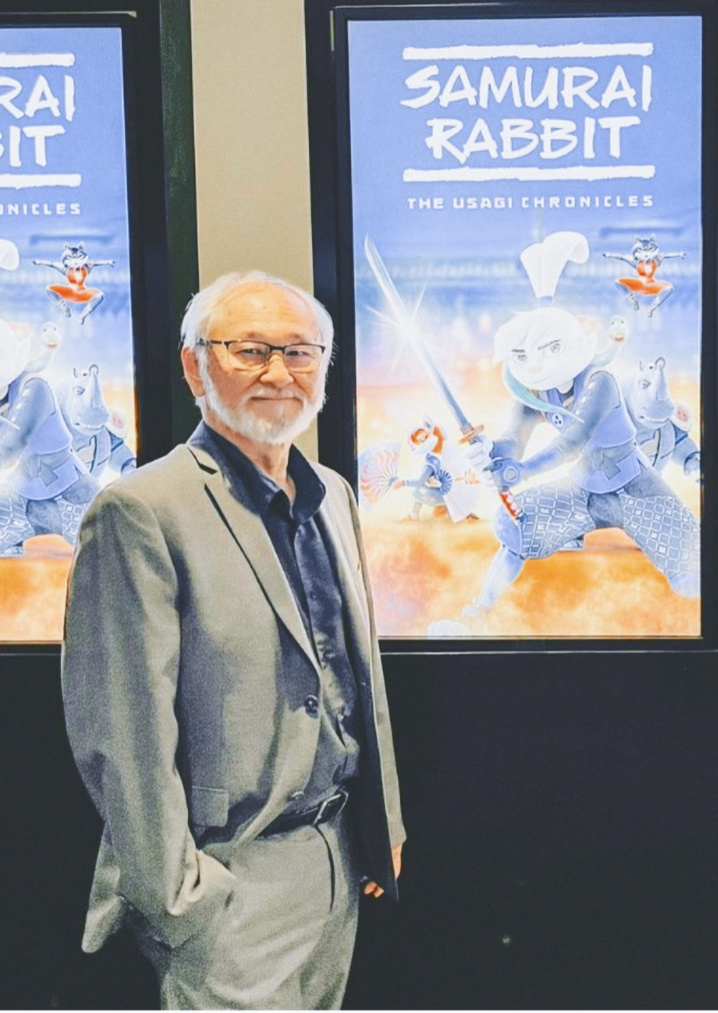 “I do as much research as I can, but within reason because this is a fantasy series. I mean, it’s possible I can get away with a lot,” he said, chuckling.

Asked if he worries about whether his audiences get all the cultural references he throws into the comics and the series, Sakai acknowledges that he creates the comic books for himself, primarily. However, he added, “Recently, I get input from people saying, ‘Oh, I liked it when you did this story about the tea cup about the tea ceremony’ or ‘when you did this for the yokai.’

I integrate those things, and I’m in a great position because I write and I draw everything. My publishers don’t see any of it until I set it up, fully completed. So, I have that trust from the publishers.”

The Netflix series is more aimed at a specific audience: young viewers who may have outgrown cartoons for video games but would watch a cool show about teenagers being rebellious and silly and at times overconfident. It’s an American production with American characters but with lots of real Japan thrown in.

Whether or not audiences realize it, Sakai’s using characters audiences could identify with to teach them about Japan. The series is shown worldwide by Netflix, including recently in Japan.

“In France, it’s been doing very well,” Sakai said. “Internationally, good. In some countries, it’s No. 1 in the kids’ market. So, I’ll be really interested to see how it does in Japan.”

That will be a challenge because the series will be subtitled, even though the subject is ostensibly Japanese. Sakai notes that his comics have traditionally not done well in Japan “because it’s not translated into Japanese. And there has never been a Western comic book that has made any type of impression in the Japanese manga market.”

Sakai says that popular Western comics are rare in Japan, and even Marvel had to produce comics for Japan with new stories that were written and drawn in Japan in order to appeal to the market there.

But stateside, Sakai’s family business and the Usagi empire has a rosy future. There are already 10 more episodes already in postproduction to follow the first season of “Samurai Rabbit’s” 10 episodes that will stream on the platform later this year or early next year. “And after that,” Sakai hinted, “we have something big, really big plans.”