The ceremony includes dedication of a Japanese rock garden and presentation of diplomas to descendants.

“By the authority vested in me by the USC board of trustees, I hereby confer upon each of these candidates the degree or certificate for which they have been recommended by the faculty, with all the rights, privileges and responsibilities appertaining thereto.

“As evidence of these degrees and certificates, an appropriate diploma of the University of Southern California has been presented to their families signed by USC’s officers and embossed with the university seal.

“On behalf of the entire community, I am truly delighted to salute our new Nisei alumni.”

With those words, spoken by the University of Southern California President Carol L. Folt, 80 years of hurt, injustice and fundamental unfairness for more than 30 Japanese Americans were put to rest.

That this act of healing and reconciliation took place on April 1 was no prank. It was, rather, a poignant ceremony for the descendants who accepted USC diplomas on behalf of their Japanese American forebears whose college educations were derailed or postponed in 1942.

The exiled were Trojans again.

Posthumous honorary degrees are awarded to the families of USC’s Nisei students who were expelled when the U.S. entered World War II, thus halting  their collegiate studies at the university. (Photo: Reuters/Bing Guan/Pool)

For Jon Kaji, his alma mater’s motto — “Fight On! — had special significance. “It all came together today,” Kaji told the Pacific Citizen. “And seeing the happy faces of all those families tonight — that made it all worthwhile.”

That’s because Kaji — a past president of the USC Asian Pacific Alumni Assn., which celebrated its 40th anniversary with a scholarship-and-awards gala that evening — waged a decade-and-a-half effort to have USC make an exception to its policy against awarding honorary diplomas posthumously.

From Kaji’s perspective, an exception was required because the circumstances second-generation Japanese American Trojans faced in the wake of Japan’s Dec. 7, 1941, attack on Pearl Harbor and President Franklin D. Roosevelt’s Executive Order 9066 on Feb. 19, 1942, were extraordinary.

EO 9066, meantime, saw to it that the biggest and most powerful of institutions — the U.S. government itself — would force the removal of more than 120,000 Japanese Americans and Japanese nationals (then ineligible to become naturalized U.S. citizens) from the Pacific Coast to 10 War Relocation Authority facilities scattered across desolate areas far inland.

To get college degrees, the former Nisei Trojans would either need to start over at new universities — or move on in life and maybe never graduate.

For Kaji, this was a wrong that needed to be righted. 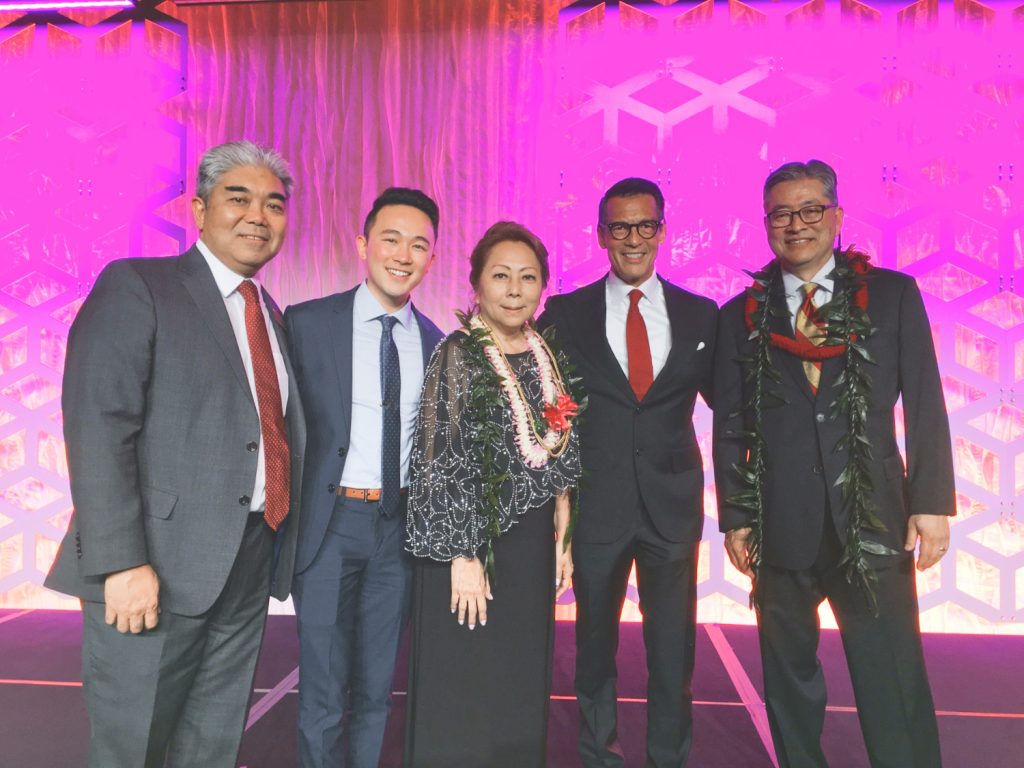 USC, for its part, presented honorary bachelor’s degrees and master’s degrees to its still-living Japanese American alumni in May 2012. But for nearly 10 more years, there would be no exception to USC’s policy of not conferring honorary degrees for deceased USC students.

Kaji, nevertheless, fought on. “To me, the effort to get this done, and to get over the goal line for all those families — it had to be done,” he said. Something changed in July 2019. That was when Folt became USC’s 12th president.

“Dr. Carol Folt is exactly what the university needs at this time in its history,” Kaji said. “Looking back at the previous administrations, and looking at what she inherited as university president, she is the right person to have taken this issue, moved it up to the Board of Trustees, to the point that we saw tonight, where we now have recognition and a resolution that now brings peace and completeness to all those families. So, I have to thank Dr. Folt.”

According to Folt, her decision to break USC’s precedent was not at all difficult. “The truth is, I heard about the story when John Kaji wrote to me, and I immediately knew that the right thing was to overturn that policy in this special case,” Folt told the Pacific Citizen. “I made the decision pretty quickly because there was no doubt in my mind.”

As for the significance of the delayed recognition, Kwan said, “What it did was, it brought together a community. And it’s not just Japanese Americans here. I mean, it’s Chinese Americans, Korean Americans — it goes across the board. … It showed the university a perspective that they did not either understand or recognize or agree with.”

Although the diploma ceremony was the evening’s highlight, Kwan seemed awed by the growth of the scholarships the USC APAA has provided over the decades.

“We’ve given out over the 40 years more than $2 million in scholarships. Wow, that’s amazing to me,” he said. “When we started this, we gave away seven scholarships, and it was like $200 apiece because that’s all we could afford. But now, we’re giving out like a whole stage full of people.” 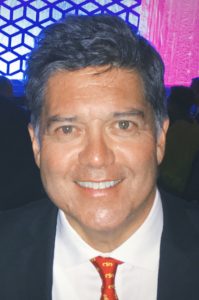 The gala was also an opportunity to present the organization’s Leadership Award to Wenda Fong, a co-founder of Coalition for Asian Pacifics in Entertainment and vice chair of the California State University Board of Trustees, and Sheree Roxas-Chua Gotuaco, founder and CEO of Stylist inPocket Technologies Inc., Scarletbox.io and founder and CEO of Omnimoda Inernational Inc. The Service Award went to Sandy and Darren Chu. Serving as master of ceremonies was KTLA Channel 5 news anchor Frank Buckley.

Although the conferral of posthumous diplomas to the descendants of the Nisei Trojans took place during evening hours in a packed ballroom at the Langham Huntington in Pasadena, Calif., the proceedings actually began that morning.

With family members of the posthumous degree recipients present, the dedication of a Japanese-style rock garden occurred at the USC University Park Campus to honor the WWII-era Japanese American USC students. The rock garden was designed by landscape architect Calvin Abe. 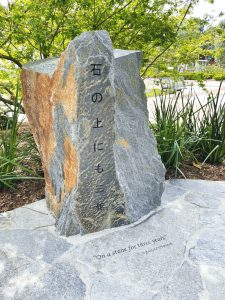 USC dedicated this Japanese-style rock garden on April 1 to honor Nisei students who were denied the potential to complete their degrees. (Photo: Matthew Weisbly)

“Going to the rock garden today and having an opportunity to speak directly to the families — for me, it was it was overwhelmingly emotional. I know it was for the families as well,” said Kaji, who is campaigning for a seat on the Torrance City Council. “But I think it was important to connect emotionally with all of them.”

Concurring with that sentiment would be sisters Joanne Kumamoto, local to the Los Angeles area, and Corrine Oishi, who traveled from the Portland, Ore., area to honor their father, diploma recipient Jiro Oishi.

Kumamoto told the Pacific Citizen that her father would, some 30 years after leaving USC, earn a diploma from the University of California, Riverside. Oishi, in agreement, said, “It was always very important for him to finish college. He got his bachelor’s degree, and then he also went on to get a master’s degree in his 50s.”

But, Kumamoto noted, “He never talked about UC Riverside” but instead “talked about USC all the time,” and would attend USC football games. The memories of being a Trojan as a younger man dominated. “He and all his friends liked the … USC traditions and everything, getting together with your friends.”

Oishi added that Jiro Oishi was “a great dad, he was a great person” and “very active in the JACL,” and told the Pacific Citizen that for her, she was grateful that USC was “acknowledging the past as well as moving forward.” 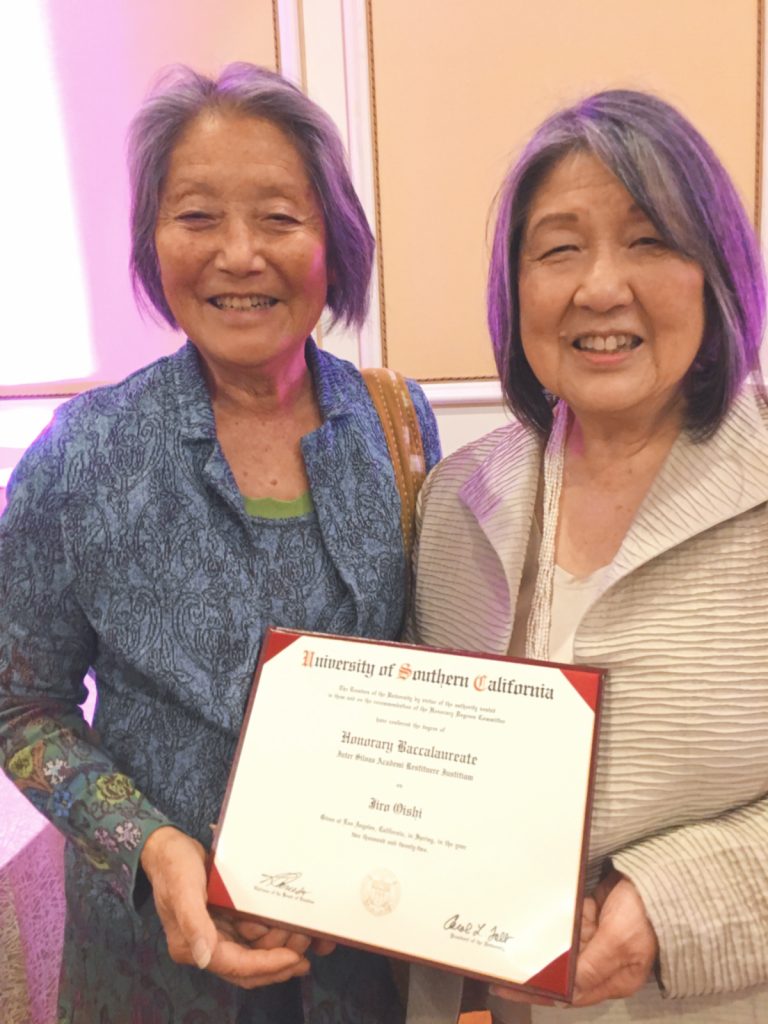 “I’ve been saying he would appreciate it, and especially because now that SC has been able to recognize them, hopefully that won’t happen to any other students in the future,” said Kumamoto.

For the relatives of Henry Kondo, USC’s posthumous conferral of an honorary degree was a momentous, sobering occasion. Kondo was enrolled at USC through the end of 1941, but by the spring of 1942, his family and he would be sent to one of America’s concentration camps for Japanese Americans.

Kondo was later killed in Europe in 1944 in the liberation of the French town of Bruyeres, fighting for the U.S. as a member of the 100th Battalion/442nd Regimental Combat Team after voluntarily enlisting while incarcerated at Arizona’s Gila River WRA Center.

Struck down at such a young age, Kondo would never have the opportunity to marry or start a family of his own.

“We’re very touched. It’s something that we didn’t expect. So, to have something like this, the recognition of his being at the school and then honored later, I think was very special,” said Debbie Fagen, Kondo’s niece, to the Pacific Citizen. “My uncle was actually the first Japanese American killed in the war from the Pasadena area. So, I never knew him. But he had written many, many letters to my mother, who was his sister.”

Another Kondo relative is Kristen Hayashi, collections manager at the Japanese American National Museum. She told the Pacific Citizen what happened after Kondo was killed in action. 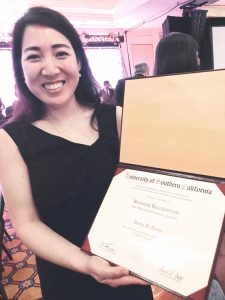 “The Pasadena Federated Mission was honoring soldiers by putting up a Wall of Honor. And at that time, Henry Kondo was the only Nisei soldier from Pasadena to have been killed. They put a Gold Star next to his name, and this made news. There are L.A. Times, Pasadena Star–News articles about the ceremony,” said Hayashi, who added that serving in the color guard for the ceremony was future Major League Baseball star Jackie Robinson, who would famously go on to break pro baseball’s color barrier 75 years ago. Also present that day was Esther Takei, who would receive an honorary degree from Pasadena City College in 2009, but in 1944, she was one of the first Japanese Americans allowed to return to the West Coast from a WRA center as a test case.

Wrapping up the evening’s events and his nearly 16-year labor to have Japanese American USC alumni so honored 80 years after Executive Order 9066 and the 40th anniversary of USC’s APAA, Kaji injected some of his good humor into the event.

“So, April Fool’s surprise to them,” said Kaji. “I think we had a great surprise waiting for them, in a very good way.”

*Presentation of diploma is pending.

Frank Chuman Gets His USC Diploma

When the University of Southern California decided to posthumously confer honorary degrees to its Japanese American alumni who were denied the opportunity to finish their educations because of World War II, the university and the USC Asian Pacific Alumni Assn. faced quite a task: researching who those deceased students were and how to locate their still-living relatives. 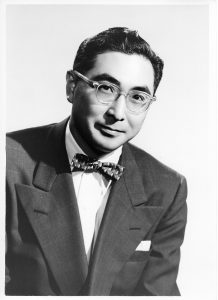 In the course of that investigation, USC was surprised to discover that one of those students was, at age 104, still alive — and long retired and residing in Thailand.

That former USC student was Frank Fumio Chuman. Among his many accomplishments: He served as JACL’s national president in the 1960-62 biennium.

In 1940, he was a law student at USC. By 1942, he was among those Nisei the school expelled, and within a few months, he was among the thousands of Japanese Americans incarcerated at the Manzanar War Relocation Authority Center.

He would eventually earn his law degree elsewhere and is credited for being among those to first broach the idea of revisiting the U.S. Supreme Court cases of Gordon Hirabayashi, Fred Korematsu and Minoru Yasui by using the obscure legal procedure writ of error coram nobis.

With the knowledge that Chuman was still alive, USC acted quickly. In February, a diploma was prepared and rushed to Chuman in Thailand.

In her April 1 remarks, USC President Carol L. Folt said, “While Frank couldn’t be with us tonight, in February with the help of his family, we were able to confer his degree on video.” (To view that message, visit youtube.com watch?v=gUlsV4ZbITQ.)

According to his son, Paul Chuman, his father will turn 105 on April 29.