Stamp Our Story led a years-long grassroots effort to honor the Nisei soldiers who fought during WWII.

Recognizing the heroic contributions of Japanese American Soldiers of World War II, the stamp is finally approved for national distribution.

The United States Postal Service revealed several new stamps for 2021 on Nov. 17, among them, a Go For Broke stamp that recognizes the vital contributions of Japanese American soldiers, some 33,000 altogether, who served in the U.S. Army during World War II.

The Go For Broke stamp, printed in the intaglio method, depicts a photo of U.S. Army Private First Class Shiroku “Whitey” Yamamoto of Ninole, Hawaii, an image the USPS sourced from the Hawaii Nisei Project’s archives.  The picture of Yamamoto, who was a member of the 100th/442nd RCT, Antitank Company, was taken in Touet de l’Escarene in Southern France. 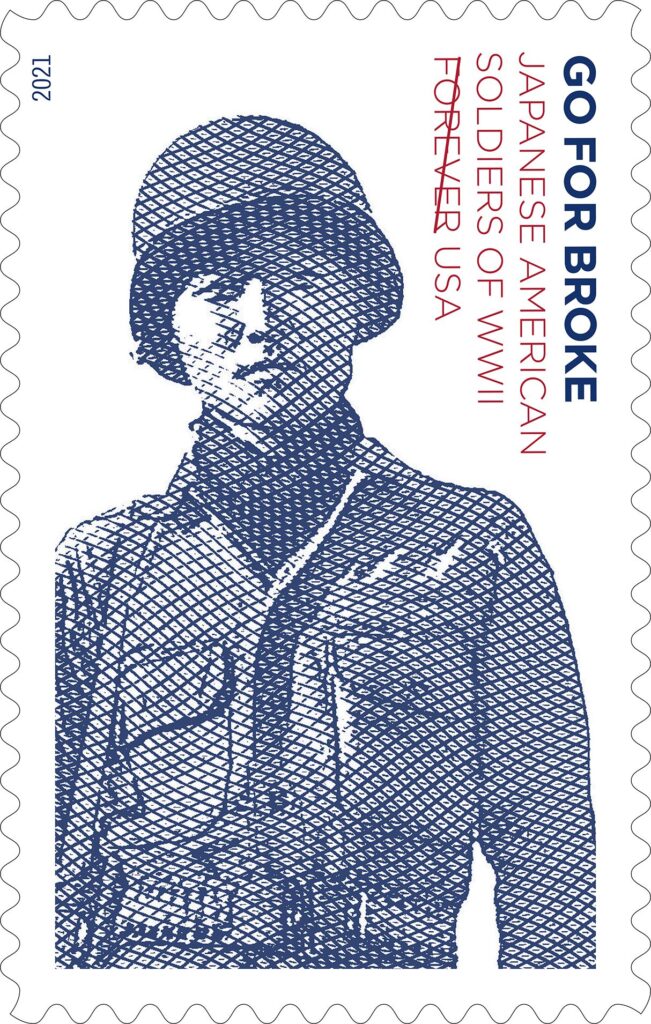 The USPS announced on Nov. 17 that it will release a Go for Broke stamp in 2021. (Photo: Courtesy of Stamp Our Story)

Its release culminates more than 15 years of grassroots efforts led by the Stamp Our Story campaign to honor the U.S. Nisei soldiers who went above and beyond to serve their country.

The Stamp Our Story Campaign’s founders, Fusa Takahashi, Aiko O. King and Chiz Ohira, were first featured in the Pacific Citizen in 2016 (see Jan. 22-Feb. 4, 2016, issue). Takahashi and the late Ohira are widows of Nisei veterans and King is a longtime member of the JACL Ventura chapter.

“Many people don’t know the Nisei soldiers’ story. The government took away their rights and imprisoned them behind barbed-wire fences, yet without hesitation, they stepped up to serve their country and became one of the most-decorated units in history,” Takahashi said in 2016.

The trio started the Nisei World War II Stamp Campaign in 2005 with the help of many JACL members. It began with signed petitions and grew into a nationwide effort; six state resolutions of support were passed in Arizona, California, Hawaii, Illinois, Oregon and Washington, along with assistance by the Japanese American Veterans Assn. Letters of support also came from Congress and from numerous national organizations including JACL and the Simon Wiesenthal Center.

The campaign issued the following statement on its website: “We are forever grateful to all of you who helped over the years, including lawmakers, past and present. We are proud to highlight that this campaign united Republicans and Democrats. Over the years, many organizations have contributed to this effort. We would like to highlight the prominent support from JAVA and JACL at the local and national levels. After the stamp is issued next year, we will continue to work toward educating the public about the American story behind the stamp.”

The Go For Broke stamp image was created by USPS Art Director Antonio Alcalá, who used the intaglio method, a handmade process of printmaking that has been utilized since the 1600s.

Said the Stamp Our Story campaign on its website, “We send our heartfelt gratitude to U.S. Postmaster General Louis DeJoy and the U.S. Postal Service. This commemorative stamp is the culmination of over 15 years of efforts by the Stamp Our Story campaign founders and the many people who supported the effort. We sincerely appreciate all of you who helped. We are forever grateful.”

A release date for the Go For Broke stamp has not yet been set. Other stamps set to be released in 2021 include a stamp commemorating Missouri statehood and one honoring Chien-Shiung Wu, one of the most influential American nuclear physicists of the 20th century.