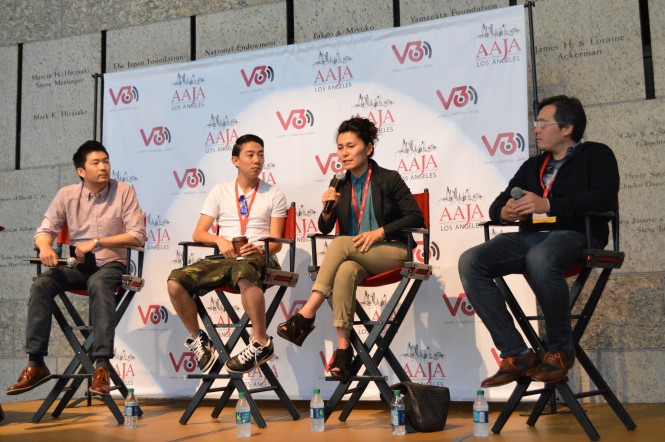 V3con Harnesses the Power of the Internet

If one looks at video site YouTube or photo-sharing platform Instagram, some of the top users are Asian American. Asian Americans are known to be savvy online, and according to a 2012 U.S. Census “Facts for Features” article, 80 percent of Asians live in a household with Internet use; this percentage is the highest among racial and ethnic groups. A digital media conference by the Asian American Journalists Assn., Los Angeles chapter harnessed the power of Asian Americans in the online space. Vision, Visibility, Voice (V3con), held June 20-21 at the Japanese American National Museum in Little Tokyo, was an opportunity to showcase the work of minorities on digital media platforms.

The event kicked off with an opening-night reception catered by artisan noodle house Tsujita L.A., as well as desserts by Spazio Caffé and beer provided by Kirin.

“It was difficult for me to find my voice as an Asian American because there were so few role models,” said Curry, who attended the event with Irene Hirano Inouye, president of the U.S.-Japan Council. “Being seen as different still hurts us. Diversity is more than checking off a box and setting up diversity committees. Diversity fuels America’s greatness, diversity strengthens business, diversity makes journalism more truthful. Asian Americans are more than just smart people, driven people and tenacious people— we are everything it means to be human. As a community, we can make sure, especially at this conference, to look at ways to use the Internet to report and connect with people, not just throughout America but throughout the world. We can make sure the next generation of Asian Americans won’t have to fight to find a voice.”

“Thank you so much for this beautiful, beautiful award — just so heartwarming. I am deeply honored to be part of this community and represent Asian Americans. This is very special for me to be in Little Tokyo – these are my old stomping grounds,” said Hill, who was a contestant last year on NBC’s singing competition “The Voice.”

Food writer Jonathan Gold received the Visibility Award for his work in bringing wide recognition to Asian restaurants and cuisine; he also participated in “A Conversation With,” an intimate public interview with Los Angeles Times editor Davan Maharaj on his experience as a food writer for esteemed publications such as the Los Angeles Times and LA Weekly.

“It’s been an extraordinary privilege to write about this food and these communities and to communicate my enthusiasm to the readers of the Los Angeles Times and beyond,” said Gold, who has covered regions like the San Gabriel Valley, at the Friday night reception.

Other activities in the program included hands-on workshops and panels with experts. One popular panel was moderated by Pacific Citizen columnist Gil Asakawa on secrets and online topics that are taboo in real life; he was joined by Evergreen Baptist Church of L.A. pastor Ken Fong, Los Angeles Times reporter Frank Shyong and performance artist Kristina Wong.

The theme of diverse voices was highlighted in the “Diversity in Media” panel, with speakers from both the business and content side of journalism. Some highlighted challenges faced in the industry.

“All journalists hit a wall where you can grow,” said Erika Hayasaki, an assistant professor in the Literary Journalism program at the University of California, Irvine, and the Los Angeles editor for Narratively, a digital publication focused on long-form feature stories.

Others offered ways to find opportunities to work in the media.

“There are people that are hiring — be persistent, don’t be afraid to tweet or email somebody,” said Marcello Sawyer, who partners with the regional HR manager to lead and support human resource efforts for American Public Radio’s West Coast offices. “Don’t hesitate in asking questions, tweet people, and they will tweet you back.”

The two-day gathering ended with the announcement of the winner of the Social Media Bingo game. With Social Media Bingo, participants were tasked to take photos and post updates on various social media sites, including selfies with program volunteers and videos on Vine about the conference. The winner was UCLA student Margaux Moores-Tanvier, who was chosen for her creative posts; she went home with an Apple iPad.

“Thank you to everyone who attended the conference and made it a success — we hope to see you at next year’s event,” said Naomi Hayase, AAJA-LA co-president.

The 2015 conference is slated to take place at JANM on June 27. To learn more about the conference, visit V3con.com.