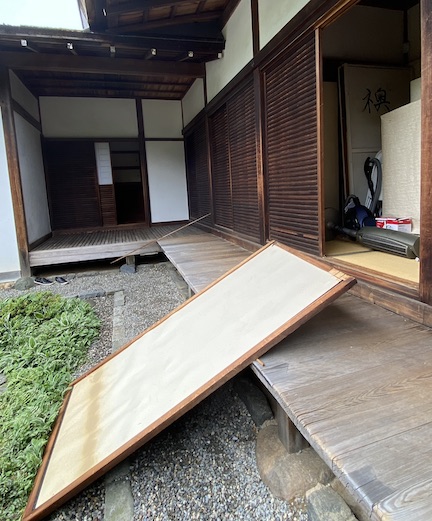 Above: An exterior sliding panel lies askew after being knocked down in an act of vandalism that took place at Philadelphia’s Shofuso Japanese House and Garden. (Photo: JASGP)

[Editor’s note: This is a developing story that will be updated and expanded upon as more details emerge.] 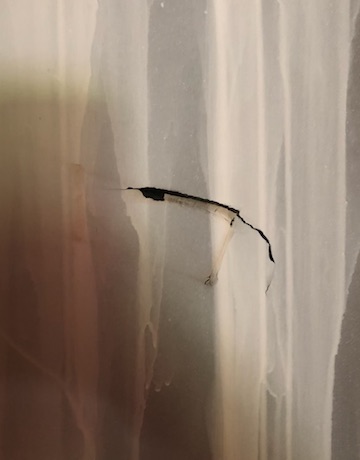 Above: Detail of damage to one of the fusuma and the painted mural by renowned Japanese artist Hiroshi Senju. (Photo: JASGP)

According to the Japan America Society of Greater Philadelphia’s Associate Director of Organizational Culture Rob Buscher, the vandalism was discovered by employees Thursday morning about an hour before the Shofuso Japanese House and Garden was scheduled to open at 11 a.m. ET.

According to Buscher, who also serves as the chair of the Pacific Citizen Editorial Board, there was extensive damage to two of the fusuma (vertical sliding panels) located in house’s interior; the fusuma are part of the waterfall mural by renowned painter Hiroshi Senju of Japan. The mural was completed in 2007.

“It looks like one of them was either punched or kicked. So, there’s a large tear and, like, a physical depression, in the fusuma itself,” Buscher told the Pacific Citizen. “The other the other one, it looks like they may have kicked or thrown a stanchion that had like an informational sign into the fusuma. So, there’s multiple points of contact where the mural was damaged. That kind of ripped up the top layer of the mural.” 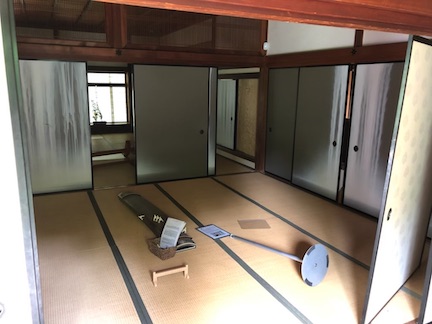 Above: A room at Philadelphia’s Shofuso Japanese House and Garden that shows the mural painted on the fusuma panels, and the sign and stand that was knocked over. The sign may have been used to damage the fusuma. (Photo: JASGP)

Buscher said that the estimated value of the mural is about $2 million. According to Associate Director of Exhibitions and Programs Yuka Yokoyama, Senju is quite well-known in Japan and was recognized at the 1995 Venice Biennale with an honorable mention for one of his waterfall paintings.

Although there is no evidence thus far that the vandalism was related to the surge in anti-Asian violence that began with the onset of the Covid-19 pandemic, Buscher speculated that this may have been more than a typical random or opportunistic act vandalism.

“I think it’s really important to specify that this is the only physical site in the city of Philadelphia that is identifiably Japanese,” Buscher said. “It’s the only piece of Japanese architecture, it’s the only Japanese cultural site in our entire region. So even if this was a crime of opportunity, there’s still some intent that happens be behind choosing a target like this. I mean, people know this as the Japanese house. So, you know, given the climate of anti-Asian hate, that is certainly something that we’ve been dealing with here in the city of Philadelphia. To me, we can’t write off the possibility that there’s some sort of anti-Asian animus that’s involved in this.”

He added that there was damage to exterior parts of the building. “There were a couple of loose objects that were like ripped down from where they were,” Buscher said. This included a wind chime and koinobori [carp flag] that was taken down from the house’s opening, as well as a few exterior fusuma panels that he said look “pretty badly damaged,” possibly from a pry bar or “maybe they just yanked on it really hard until the wood gave.” 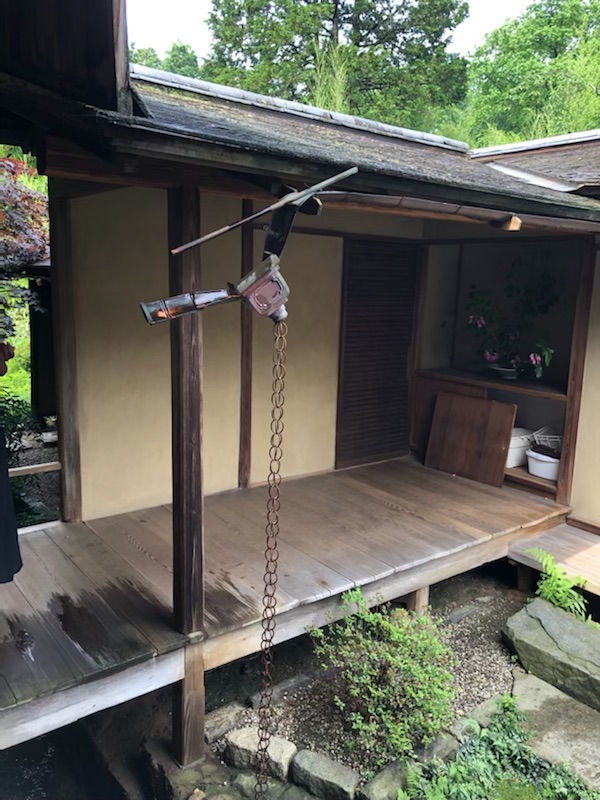 A rain gutter and kusaritoi (rain chain) hang down off the building after being partially yanked down by one or more vandals. (Photo: JASGP)

A koinobori rests on the ground on Thursday, June 16, after being pulled down in an act of vandalism at Philadelphia’s Shofuso Japanese House and Garden. (Photo: JASGP)

Other exterior damage includes a rain chain or kusaritoi that was partially pulled down. According to Yokoyama, when it rains, the chain makes a noise as water trickles down it and is one of the “favorite attractions” for visitors to Shofuso Japanese House and Garden.

Buscher and Yokoyama both said that the Shofuso Japanese House and Garden staff reported the incident to Philadelphia Police Department on Thursday at about 10:30 a.m. ET; as of 4 p.m. ET, no one from the PPD had shown up to take a formal police report.

According to Buscher, there is neither an alarm system nor a video surveillance system installed at the site.

The Shofuso Japanese House and Garden was originally built in 1953 as a gift from Japan to the United States and displayed in New York City. It was relocated to its current location in Philadelphia’s West Fairmount Park in 1958. It is currently administered by the nonprofit Japan America Society of Greater Philadelphia.

Satellite view from Apple Maps of the Shofuso Japanese House and Garden at its location in Philadelphia’s West Fairmount Park.