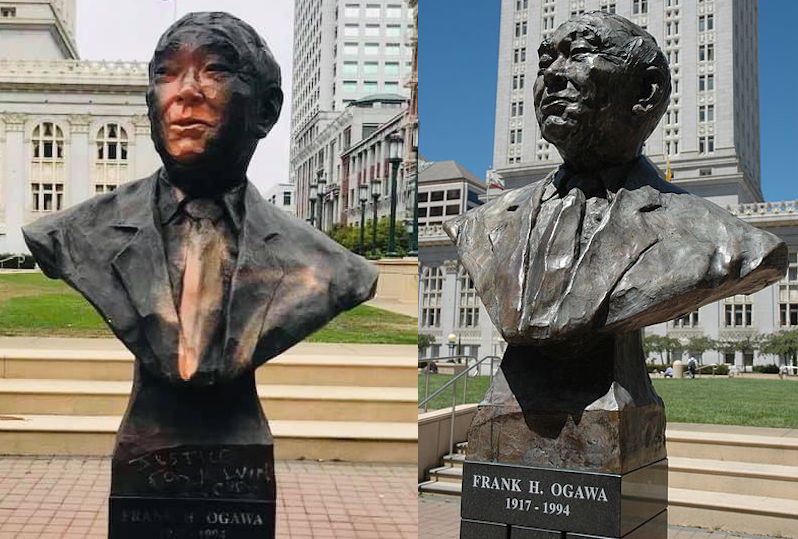 On the left is a photo of the defaced bust of former Oakland City Councilman Frank Ogawa from the Facebook page of his grandson, Matt Ogawa. On the right is the bust before it was vandalized. (Righthand photo: Wikimedia Commons, tinyurl.com/yy76wze2)

Late Oakland City Councilman Also Had Plaza Named for Him

The bust of Frank Hirai Ogawa, who served as a city councilman for Oakland, Calif., from 1966-94 and had the City Hall Plaza renamed for him to honor his years of service, has been defaced.

The act of vandalism occurred after a July 25 protest in Oakland in support of the unrest that has roiled Portland, Ore.

A statement by Ogawa’s grandson, Matt Ogawa, along with a photo of the defaced bronze bust of his Nisei grandfather, was posted on his Facebook page. In it, the younger Ogawa wrote: “My Grandfather fought so hard for the Oakland community and always aimed to give all minorities a chance and a voice. He wanted to take his experience and prove to America that Japanese Americans/minorities can make a difference despite the injustices that happened to himself . …”

In response to the damage caused to the memorial for Ogawa, the Berkeley Chapter of the JACL issued the following statement:

“The Berkeley chapter of the JACL protests the vandalism to the bust of former Oakland City Councilman Frank Ogawa by unknown persons, but stand — as we believe Frank Ogawa would have done — in solidarity with the rights of citizens who exercise their rights to protest injustice, with the movement for Black lives, and against federal unmarked troops forcibly brought into our communities.

“Frank Ogawa was the first Japanese American to serve on the Oakland City Council and experienced state racism when he was shipped to the Topaz concentration camp in Utah without due process during World War II. Berkeley JACL will always remember and honor Frank Ogawa’s great contributions to our community and will continue his work by supporting the Black Lives Matter movement and all efforts to end racism.”

In a statement sent to the Berkeley JACL on July 28, Matt Ogawa wrote, “I wanted to send a thank you to all of you for your support and attention in this matter. My grandfather had a very small family and there are virtually none of his immediate family members near Oakland or the East Bay. My father, his only surviving child, is now in L.A. I, myself, am in San Jose. I received word a few hours ago that Phase 1 of restoration has begun. I am not clear how long the full process will take, but the initial pictures look amazing.

“It really is heartwarming to know what a great community we have as Japanese Americans,” Matt Ogawa continued. “I will try to get additional details and will keep you posted.

“Again, I really cannot thank you all enough for your support and care. It is a shame that this had to happen in the first place and that more people don’t know just how much my grandfather cared for this city. He wanted nothing more than for minorities to have a voice and a seat at the table. He always talked about how he never wanted anyone to think Japanese Americans could not influence change.”