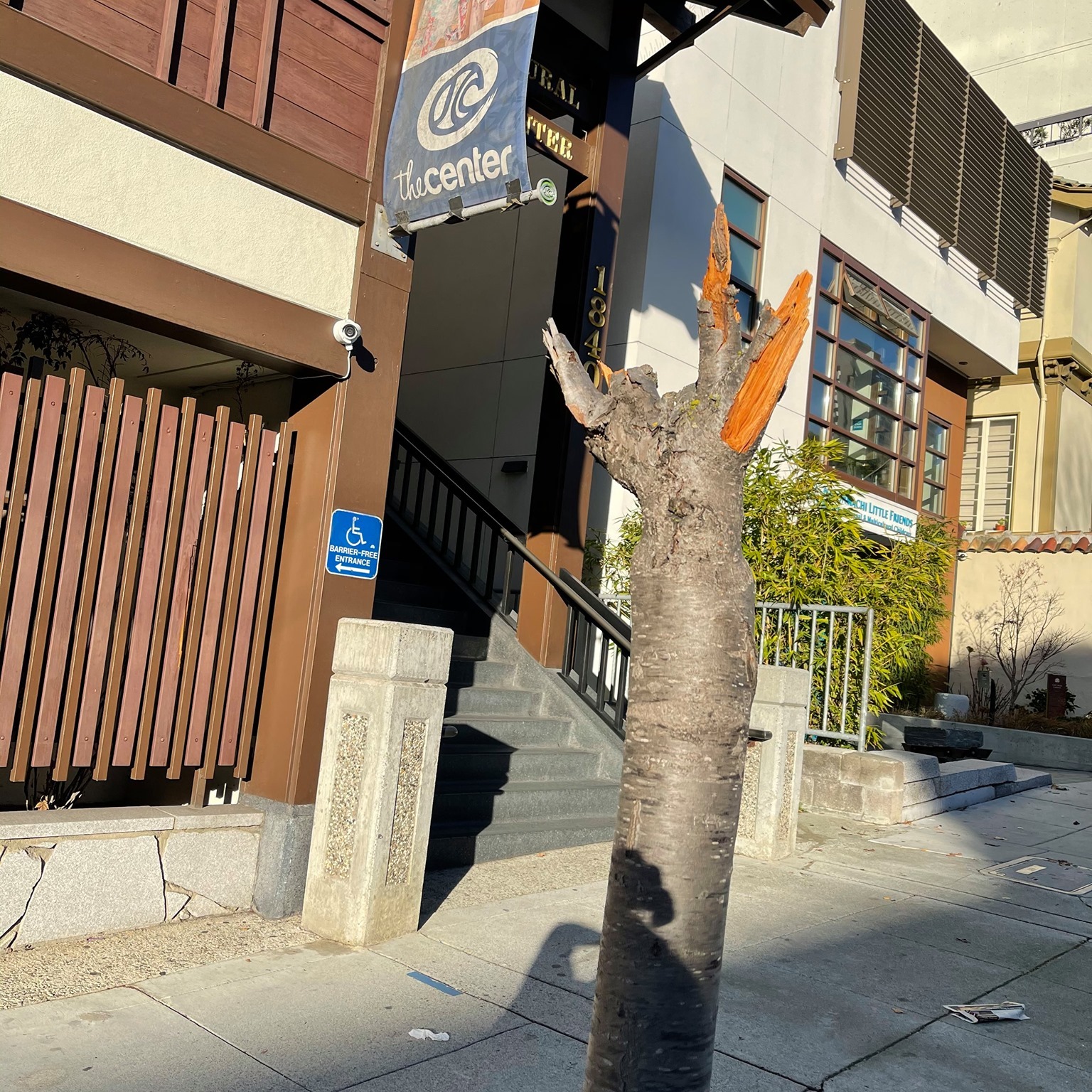 This photo shows the extent of the damage to one of the cherry trees planted in San Francisco’s Japantown. (Photo: David Toshiyuki)

The Year of the Ox arrived like a bull in a china shop for San Francisco’s Japantown and Los Angeles’ Little Tokyo as acts of vandalism struck both historic ethnic enclaves.

Security video showed two cherry trees, planted in the mid-1990s adjacent to San Francisco’s Japanese Cultural and Community Center of Northern California (JCCCNC, aka the Center) in Japantown, torn down to their trunks by a man over the New Year’s holiday.

According to Matt Okada, the JCCCNC’s director of special events and communication, the damage to the cherry trees occurred on two separate nights.

The vandal, described as a male African American over 6 feet tall and weighing more than 300 pounds, was shown in security camera video using just his hands to tear the trees asunder. Video stills show him wearing a dark hooded jacket.

These stills from the JCCCNC’s security camera video show the perpetrator tearing off and walking away with limbs from one of the two damaged cherry trees. (Photo: Courtesy of the JCCCNC)

“It’s astonishing the lengths the vandal went to, to destroy each limb from the trees,” said Haruka Roudebush, the Center’s senior programs manager. “Some of the early news reports used language that suggests the limbs were cut off of the tree, but they were actually ripped off by hand, one by one, with considerable effort. I can’t think of any reason why anyone would want to do this, but I’m so grateful how much immediate support has come from the broader community in response to this vandalism.”

A GoFundMe campaign to raise funds to replace the trees was launched with a goal of raising $5,000. To date, nearly $31,000 has been raised. “We’ve received a tremendous outpouring of support,” said Okada. “It’s been very moving.”

In Los Angeles, an arrest has been made in relation to the acts of vandalism, which took place Jan. 5, 2021, and Dec. 18, 2020, according to the Rafu Shimpo, whose report pointed to a mentally ill homeless person as the suspect. The newspaper also reported that among the businesses victimized were the Kajima Building, Cafe Demitasse, the San Pedro Firm Building and the California Bank & Trust.

In another act of vandalism in San Francisco, a street memorial near 2nd and Mission streets to deceased hit-and-run victims was desecrated.

Japanese national Hanako Abe, 27, and Elizabeth Platt, 60, were killed on New Year’s Eve while crossing the street. Arrested for the incident was Troy McCalister, 45, described as a parolee and multiple offender, who was driving a stolen car that struck and killed the two victims. He was charged with DUI and vehicular manslaughter.