The Venice-West Los Angeles chapter of the JACL announced its scholarship winners recently.

Kaycee Kyoko Ching, a second-year medical student, was awarded the $3,500 Chiyo M. Hattori Memorial Scholarship, designated to an outstanding student pursuing an education in medicine. Allison Yamashita, who graduated with a 4.0 grade point average from Venice High School and will be attending the University of California, Los Angeles, in the fall, was the winner of the Jack Nomura Memorial High School Scholarship.

Ching, the daughter of Kay and Alvin Ching of Los Angeles, finished her first year at Wayne State University School of Medicine in Detroit and chose to attend a medical program that gave her an opportunity to work with an underserved community of various backgrounds and circumstances. She intends to specialize in internal medicine with a focus on geriatrics.

She graduated from Mira Costa High School in Manhattan Beach, Calif., before earning her bachelor’s degree in psychology from the University of California, Berkeley.

The Chiyo M. Hattori Scholarship was established in 2001 as an expression of the family’s gratitude to the West L.A. chapter for awarding a high school scholarship to their son, who later became a cardiologist in the Los Angeles area. 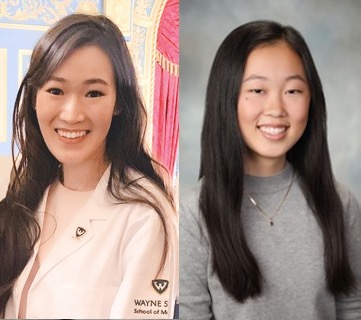 Yamashita, the daughter of Victoria and Roger Yamashita of Los Angeles, wrote and illustrated an award-winning children’s book chronicling the story of the Atomettes, a postwar Nisei girls social club based out of the West Los Angeles United Methodist Church. (She created a Youtube video version of the book, which can be viewed by visiting https://www.youtube.com/watch?v=FsQIknu8cYM.)

At Venice, Yamashita was a member of the cross-country and track teams, running up to eight miles a day during the season. She also helped found the campus Red Cross Club, which raised more than $3,000 to support various causes. She plans to major in psychobiology at UCLA.

The $1,500 scholarship is named in honor of the late Jack Nomura, a longtime chapter board member.

The Venice-West L.A. chapter forwarded Yamashita’s application for consideration of a National JACL Scholarship, and it was announced on Aug. 7 that Yamashita was named recipient of the $5,000 Henry & Chiyo Kuwahara Memorial Scholarship.

The scholarship was established by the estate of the late Henry and Chiyo Kuwahara to support the educational careers of JACL youth members. Henry Kuwahara was an investment and securities broker in Los Angeles.