The chapter participates in a socially distanced ceremony at the Watsonville Buddhist Temple. 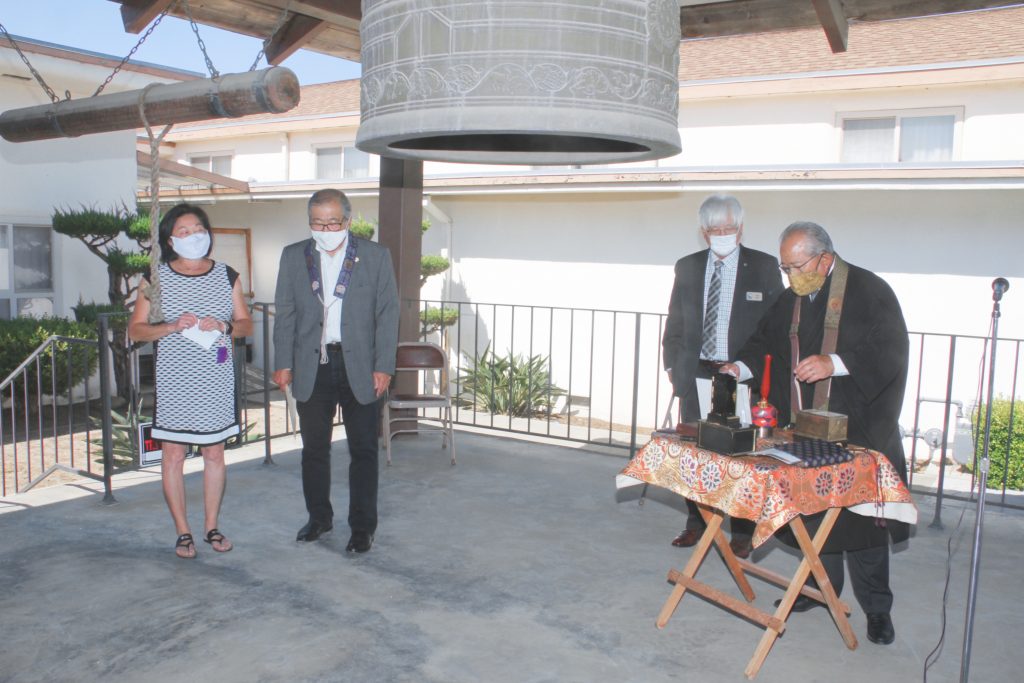 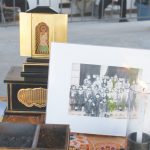 The butsudan (altar) featured a group photo of school children in Hiroshima taken on Aug. 5, 1945; all of these children perished the next day. (Photo: Courtesy of W-SC JACL)

On the 75th anniversary of the dropping of the atomic bomb on Hiroshima, Japan, Rev. Hosei Shinseki, who administers to the Buddhist temple members and communities of the Monterey Peninsula, Salinas Valley and Watsonville, conducted a memorial service on Aug. 5.

“As we observe the 75th anniversary of the nuclear bombs dropped on Hiroshima and Nagasaki, let us

rededicate ourselves to peace in our homes, in our communities and in our nation and world. Let us bow our heads in gratitude to those who have gone before us and who reveal to us the truth of life. Namoamidabutsu. How grateful I am,” said Rev. Shinseki.

On a small butsudan (altar), Rev. Shinseki pointed to a group photo of school children taken on Aug. 5, 1945, in Hiroshima; all of these children were dead on Aug. 6. 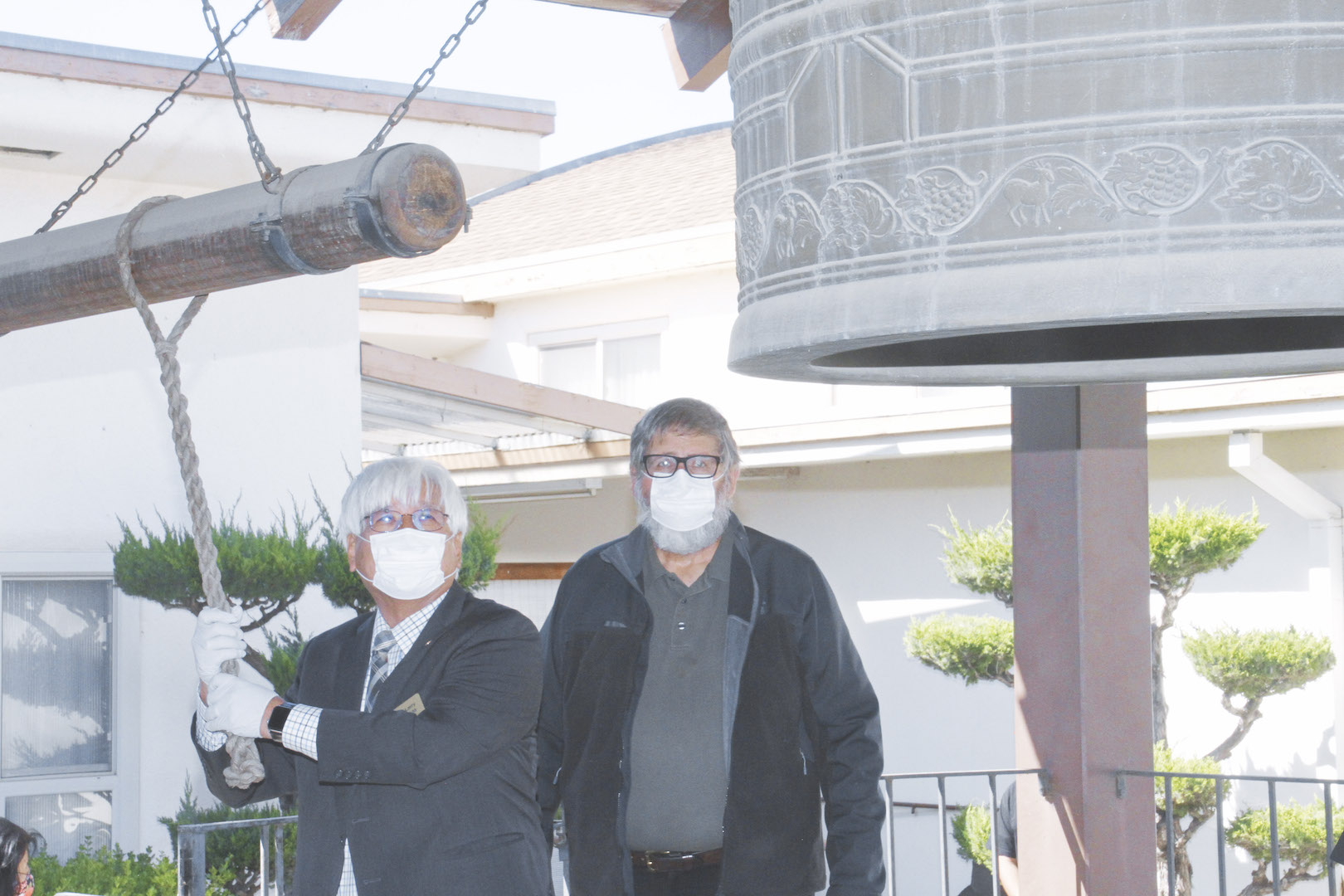 Former JACL National President Larry Oda (left) rings the bell at the Watsonville Buddhist church on Aug. 5 to commemorate the 75th anniversary of the bombing of Hiroshima in 1945. Looking on is Bill Wurtenberg, minister’s assistant at WBT and W-SC JACL member. (Photos: Courtesy of W-SC JACL)

During the ceremony, Larry Oda, former president of the National JACL and president of the Monterey Peninsula Buddhist Temple, told the “Sadako” story and the significance of the origami tsuru (cranes) today.

Representing the Watsonville-Kawakami Sister City Assn. (Nagano ken) was Phyllis Nagamine, who spoke of the close relationship now established between Japan and the United States. In addition, Councilman Lowell Hurst from the City of Watsonville spoke of the contributions made by the Nikkei community to the town.

And representing Watsonville-Santa Cruz JACL was President Marcia Hashimoto. Her husband, Mas Hashimoto, 84, who at age 9 was in Poston II with his family, spoke of his two older brothers serving in the Pacific war with the U.S. Army Military Intelligence Service, who were poised for the invasion of Japan. Their lives and the lives of millions — both Japanese and Americans — were thus saved. “Hiroshima” today is synonymous with “world peace” and “never again!”

At 4:15 p.m., the gathered congregation (wearing masks and observing social distance as much as possible) rang the large bonsho (bell) at the temple 75 times in memory of all who died as a result of the A-bomb. 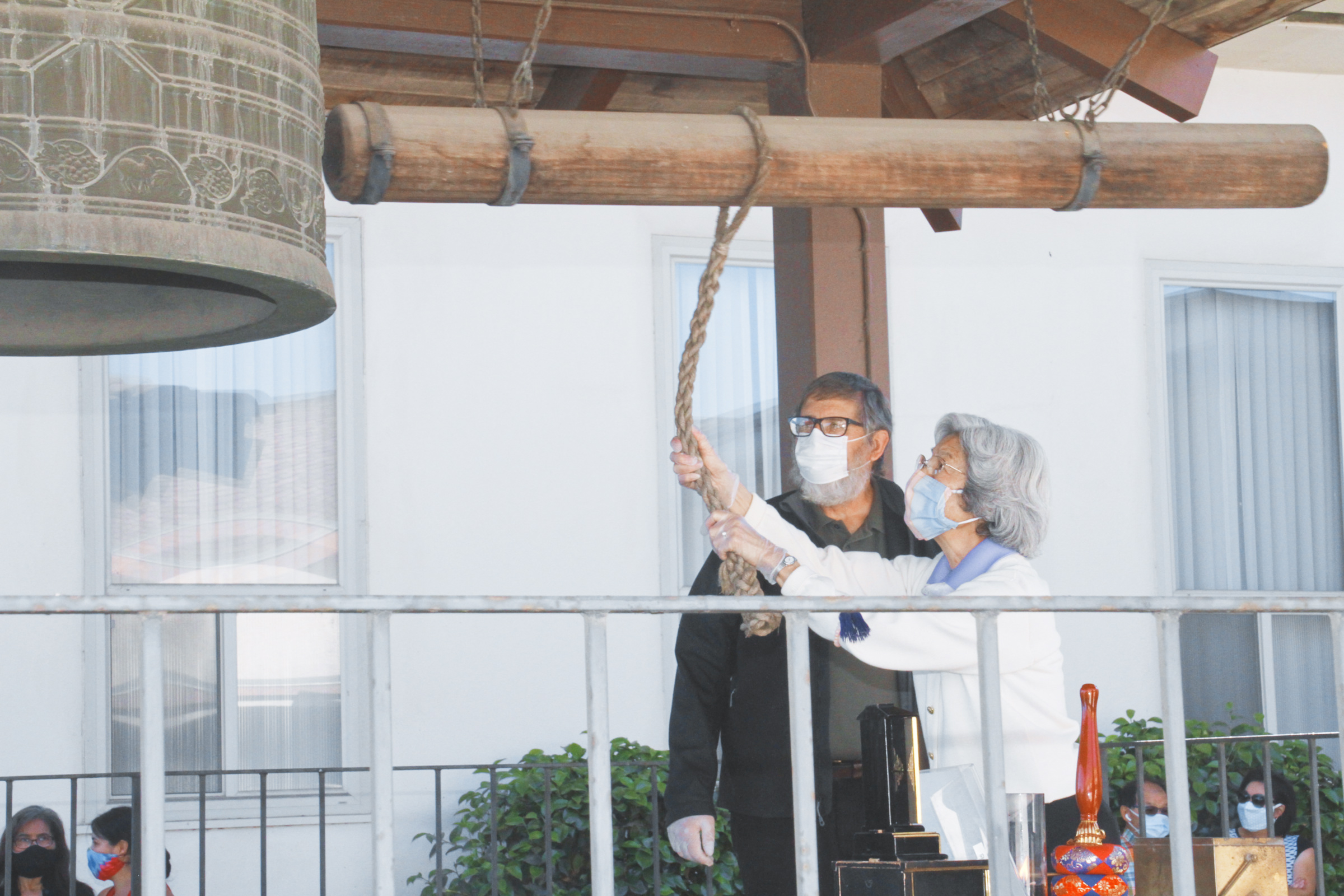