The Topaz Museum seeks public input to guide the preservation of the Wakasa Monument as the Wakasa Committee asks for a professional excavation at Topaz.

DELTA, Utah — The Topaz Museum Board announced recently plans to launch the Topaz Community Outreach Project as part of its effort to preserve and interpret a recently discovered stone monument, first erected in 1943 in honor of James Hatsuaki Wakasa, who was shot and killed on April 11, 1943, by a sentry guard while forcibly incarcerated during World War II at the Topaz concentration camp in Utah.

Over the course of the next seven months, as revealed in an official press release, the Topaz Museum Board will gather crucial community input and perspectives on the future of the Wakasa monument. The collected feedback, combined with recommendations from the National Park Service, will be assembled into a public Interpretive Project Plan.

This plan will provide executable guidelines for the long-term preservation and interpretation of the monument.

The Topaz Community Outreach Project will include community engagement via online and print surveys, as well as public meetings, held both virtually and in person. 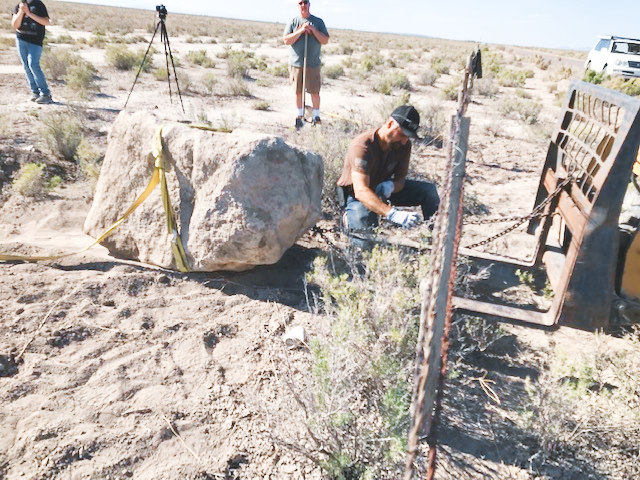 A contractor lifts the Wakasa Monument using a forklift on July 27, 2021. (Photo: Courtesy of the Utah Division of State History)

In the 11 months since the stone was unearthed, the Wakasa Memorial Committee, in an official statement, has asked the Topaz Museum Board to carry out a professionally led community archeology excavation of the site where the Wakasa monument was unearthed by the museum.

Without conducting a more thorough excavation with proper documentation led by qualified archeologists, it is difficult to interpret what was at that site.

The Wakasa Committee has asked the Topaz Board that the excavation be scheduled before or around Sept. 11, the 80th anniversary of the opening of Topaz in 1942. The committee has also asked the Topaz Museum Board to issue regular public reports with photographs on the condition of the memorial site and stone. No public updates have been made since the NPS issued its report in February.

According to a statement by the Wakasa Committee, “The National Park Service has agreed to oversee such a project, and the Utah State Historical Preservation office has agreed to collaborate. They are awaiting the board’s approval and invitation.”