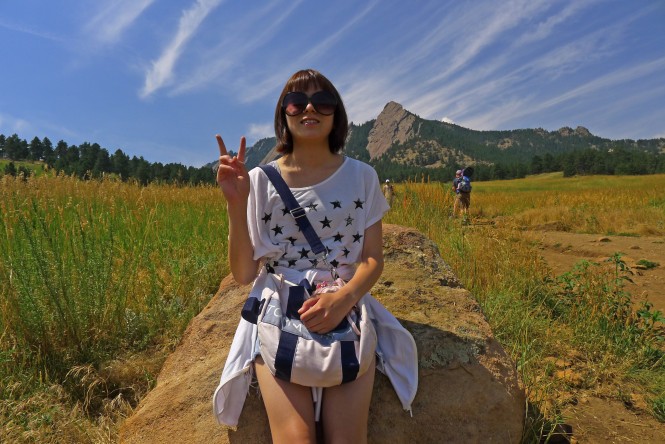 Want to Connect With Your Japanese Heritage? Host a Visiting Teenager!

Yurika Shiitani poses in front of the Flatirons rock formation in Boulder, Colo., with the ever-present Japanese peace sign. Photo by Gil Asakawa

‘Hello. My name is Yurika, and I am visiting from Tokyo. I am 17 years old, and I came here alone.”

This is how Yurika Shiitani introduced herself to dozens of people when she came to America for a two-week visit.

My wife, Erin, and I hosted her because I’ve known her father, Tetsuo Shiitani, for 20 years. He’s a journalist who works for the Tokyo Shimbun(ITAL) newspaper. We first met when he came to Colorado Springs to work via an exchange program as a reporter for the Gazette(ITAL) (then still called the Gazette Telegraph), where I worked at the time as entertainment editor. I helped him find an apartment and buy a car (a lemon of a Honda), and I tried to introduce him to the subtleties of conversational English.

Many Japanese know a little bit of English, not just because of the pervasive influence of Western culture and signs all over Japan in English, but also because the language is required in school — at least, reading and writing it. Japanese don’t always have the opportunity to speak conversational English. So, one way to get the hang of talking like an American is to come to America and immerse yourself in it. That’s what Tetsuo did two decades ago. He held halting conversations and assiduously studied the English side of his Japanese-English dictionary, word-for-word, page-by-page. He was awesome.

Yurika, who flew alone, as she was proud to point out, on the year-old direct “Dreamliner” jet flight from Narita Airport in Tokyo to Denver International Airport, arrived with much of the same goal: to practice conversational English. She didn’t have her nose in a dictionary, but instead she relied often on a translation app on her iPhone. And thanks to today’s newfangled technology and the wifi router in our home, we were able to Skype her father in Japan to let him know she’d arrived just fine, and she kept in touch with him — and all her friends both in Japan and traveling in London and elsewhere — via a Japanese messaging app called Line, every night.

It was a pleasure hosting Yurika, and I would highly suggest Japanese Americans to find exchange programs or reach out to relatives to host visiting teenagers from Japan. There are some challenges, like teenagers apparently the world over like to sleep in. Late. And not just because of jet lag. I had to rouse her out of the guest room several mornings (noons, really), and she said her father gets angry at her because she loves to sleep so much even at home.

One reason I recommend hosting a Japanese visitor is that even though he or she is here to practice his or her English, you get to practice Japanese. I guarantee that you’ll find you know more Japanese words than you thought. Stored deep inside your memory banks, like in a hidden pocket of a hard drive, are the words you heard as a kid — maybe being yelled at you by your grandparents — or words you overheard at restaurants or community events. When you’re trying to communicate with a 17-year-old girl about how the bath towels you rolled up and left on the guest bathroom counter aren’t there for decoration, and she’s welcome to use them, you’d be surprised at how words you didn’t think you knew might pop out of your mouth. One was “otona,” for “adult.” I’m not sure I’ve ever said the word, but it came right out in a sentence . . .

We had a lot of fun with Yurika. We took her to the mountains, drove her south to Colorado Springs for sightseeing, took her shopping (a big hit) at both outlet malls and a regular shopping mall, and we even took her to an amusement park (the biggest hit of the week). We had her try Mexican food and Japanese American food and even found a couple of decent authentic Japanese restaurants for her to enjoy.

Plus, I learned lots about Japan through the perspective of a teenager. For instance:

I’m glad we got to spend time with Yurika, and I hope she enjoyed staying with us. And I urge all Japanese Americans to reach out and host a visitor from across the Pacific. There is no better bridge-building and learning experience than face-to-face interaction.

Gil Asakawa is a member of the Pacific Citizen Editorial Board and the author of “Being Japanese American. He blogs about Japanese and Asian American issues at www.nikkeiview.com, and he’s on Facebook, Twitter and lots of other social media. He was recently named the 2014 Asian American Journalists Association AARP Social Media Fellow.